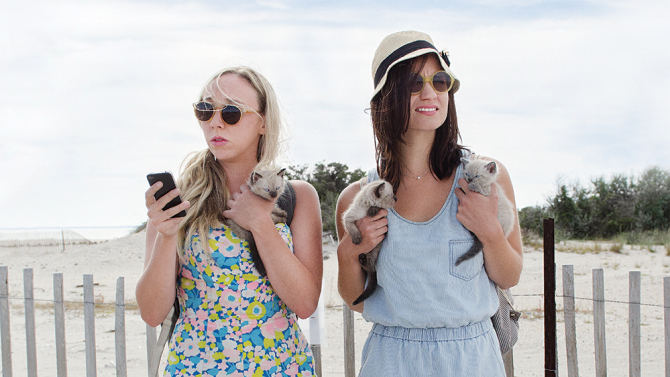 A dyspeptic riff on the exhaustingly over-documented travails of today’s rudderless post-collegiate folks belatedly coming of age in gentrified Brooklyn, the debut feature from writer-directors Sarah Violet-Bliss and Charles Rogers takes an amusingly dim view of their privileged subjects. Fort Tilden is named after a beach in the Rockaways, where our two hapless protagonists venture from their hipster enclave of Williamsburg to go meet up with a couple of cute boys. Getting there takes them the better (and worst) part of a day.

Allie (Clare McNulty) insists she’s “taking the day off,” though it’s never clear from what, exactly, as employment doesn’t seem to interest her much. She does, however, blow off an important meeting with her Peace Corps supervisor about an impending assignment to Liberia. The flighty, self-obsessed Allie doesn’t immediately strike one as a Peace Corps type, and best friend Harper (Bridey Elliott) accuses her of signing up “just so you can tell people that’s what you’re doing.”

Harper is something else. She breezes around blissfully untroubled by so much as a single thought concerning anybody else with whom she shares the planet Earth. Living off her rich daddy, who runs some sort of dastardly American company that plunders resources in India, Harper claims to be an artist (“mostly mixed-media stuff”) yet can’t be bothered to sit down and actually, y’know, produce any artwork. But her shtick sure sounds good at parties.

Basically, just imagine the leads of Romy and Michele’s High School Reunion as the two worst people in the world, drifting along blithely, unwittingly insulting everyone in their paths while only occasionally glancing up from their phones. For some folks, the company of these characters will be intolerable and I fully understand. (You can eavesdrop on this stuff for free at overpriced coffee shops or microbrews in any trendy neighborhood.) But I found the film wickedly amusing in its depiction of just how helpless and ineffectual these kids are from the moment they attempt to step out of their bubble. Fort Tilden is like a darkly comic adaptation of one of those hand-wringing articles about how millennials are so coddled they can’t hack it in the real world.  I mean, these two can’t even get themselves to the beach, for Chrissakes.

It’s a scream to see Allie, ostensibly leaving soon for Liberia, treating Flatbush as a terrifying foreign land full of customs she cannot fathom. Harper at first tries to play it a little cooler, attempting to ingratiate herself with a cab driver by telling him, “I was really sad when Satyajit Ray died.” But before long she’s calling her daddy at the office (in India!) asking for his help getting “out of Deep Brooklyn.”

Fort Tilden lacks the first-person empathy of Lena Dunham’s “Girls” or Desiree Akhavan’s marvelous, too-little-seen Appropriate Behavior. But it is not without feeling for its feckless travelers, thanks mostly to a humiliating final set-piece so squirmy and cringe-inducing I may have watched some of it from between splayed fingers. Every dopey assumption made by these two characters is hilariously (even cruelly) upended; though it would be overstating things to say that there are lessons learned, at least there are some questions asked by two people for whom curiosity is not a predominant trait.

It takes Allie and Harper all day to get anyplace, but by the end of the movie, it really feels like they’ve been somewhere.