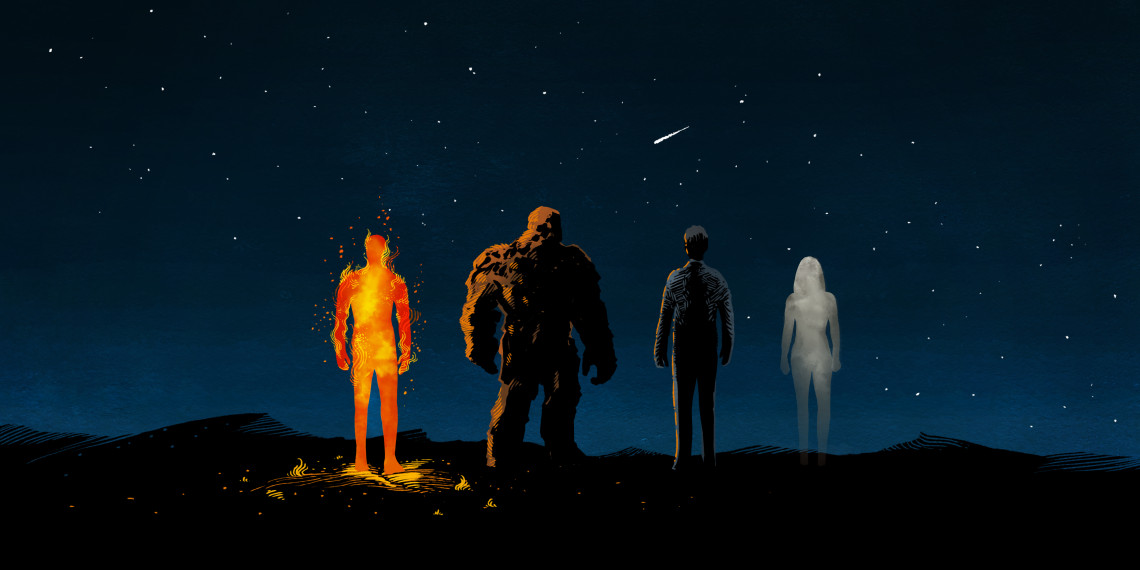 We Were Once A Fairytale: On The Fantastic Four

The story of the Fantastic Four is essentially the story of Icarus. In the ancient version, a young man gifted with wings bound in wax ignores his father’s warnings about straying too close to the sun and plummets into the sea in a rain of melted wax. The Fantastic Four venture too close to the sun as well, originally rocket-bound and exposed to “cosmic rays,” now in Josh Trank’s reboot (here to be referred to, as dictated by its marketing, as Fant4stic) having pierced the barriers of interdimensional space. Unlike Icarus, they return, though Trank claims that his take plays up the horror implicit in finding one’s body suddenly imbued with godlike powers. Thousands of years of narrative osmosis have lain the fable of Icarus at our feet as an urtext of Western literature, among the first stories of innovation gone wrong. But the Fantastic Four have arrived in the age of the superhero event film as battered also-rans.

“Is this the road company?” Roger Ebert asked in 2005, bewildered by the childish antics of Tim Story’s absurd film adaptation. “No one should care about this thing getting made,” Film School Rejects’ Andrew Doscas crowed recently at the prospect of Trank’s reboot, presenting decades of supposedly mediocre storytelling as evidence of the property’s deep-rooted inferiority. Even Trank claims that his version will owe as little as possible to the source material. Meanwhile, in an act of premeditated malice, Marvel recently removed the monthly Fantastic Four comic from circulation for the first time in 50 years. A crowded genre approaching audience weariness now presents audiences with yet another super team—and all evidence seems to suggest this to be a hobbling property, always second-rate, mascara forever smeared while the popular kids ride limo donuts on their lawn. But maybe the more appropriate metaphor for The Fantastic Four is the matriculated senior still hanging around the high-school parking lot in his letter jacket long after the fading of his relevancy. Without these characters, the modern comic book movie wouldn’t even exist. 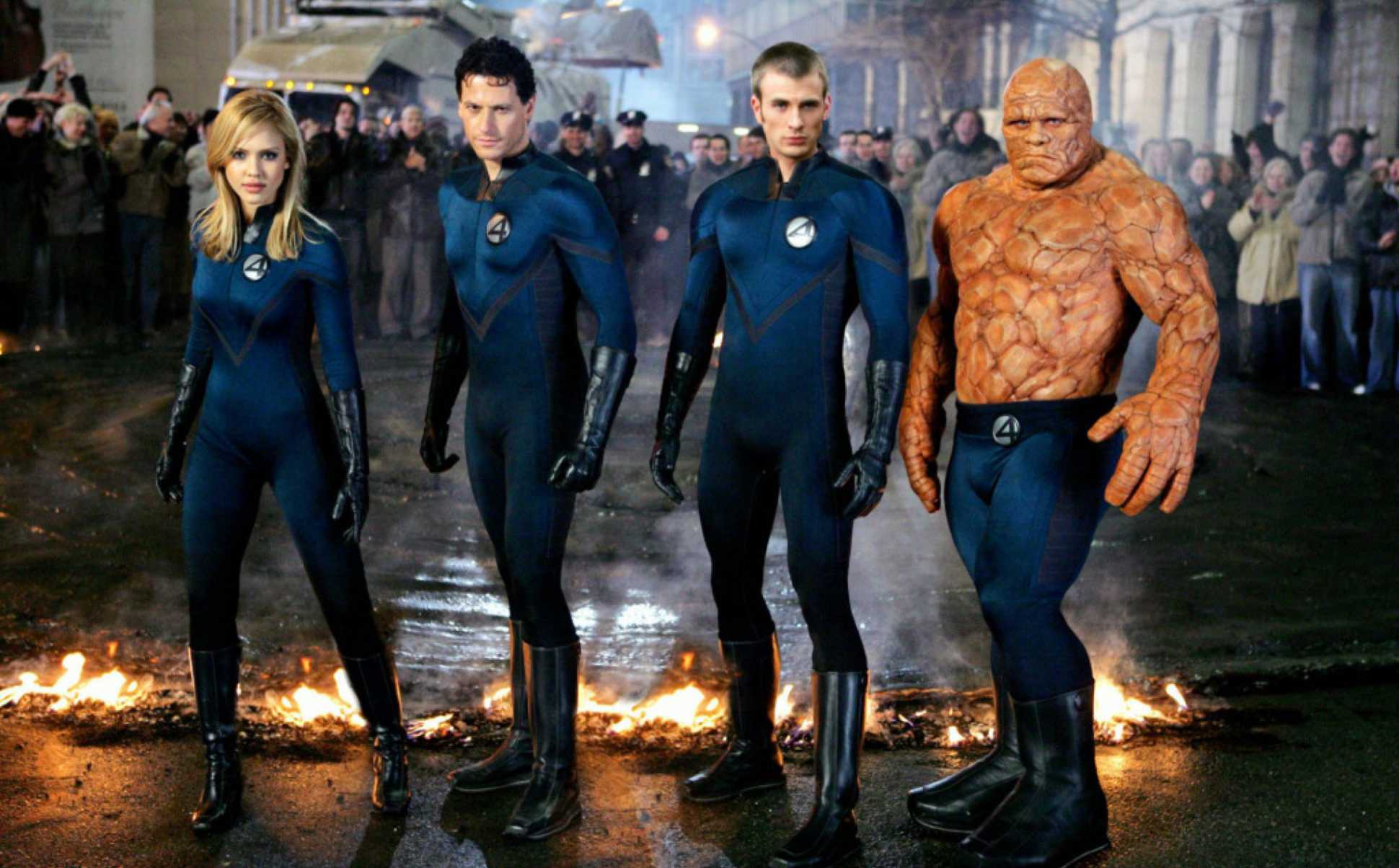 The Fantastic Four were birthed in an unfolding of creative energy deserving canonization in the progression of 20th-century art. Stan Lee scripted the stories and supplied the operatic dialogue, and he may have lived to take all the credit and make endless cameos in these Marvel films, but The Fantastic Four always bore the unmistakable fingerprints of artist Jack Kirby. Month after month, page after page, from 1961 to 1970, Kirby (at his most effective when accompanied by inker Joe Sinnott) laid the groundwork for the visual, tonal and narrative palettes of not just the modern superhero story, but the modern blockbuster. Comics had toyed with the idea of shared universes and serialized storytelling before, while madcap artists like Fletcher Hanks had pushed the medium to its cosmic limit. But it took Lee and Kirby’s collaboration here to balance the humanist with the biblical.

Most comic stories before The Fantastic Four had been one-off affairs, so when Kirby and Lee stretched the arrival of the world-eating Galactus across two issues, fans wrote incredulous letters complaining about not getting a full story in each issue. And yet look at the first page of that second issue, when the title characters gaze skyward with a mixture of fear and wonder at a sky torn open by a hungry space god—a sky which we cannot actually see, as the artist has focused our gaze on only the character’s faces. (Call it the proto-Spielberg face.) It’s hard to imagine what it must have been like to come across those panels then. Visually, Kirby experimented with photo collage and composition to the near-breaking points of the era’s primitive comic printing technology. Thematically, Lee somehow collapsed the anthracite of his young reader’s angst into perfect diamonds of narrative whose pathos and irony blended Greek tragedy with the waning optimism of the ’60s. This level of sustained wonder is all too common now. Where our ancestors grew weary turning lathes in precision-parts factories, we are exhausted by the rotational delivery of comic-book spectacle. And, like all good source material, survival requires stewardship.

So far as the Fantastic Four are concerned, 10 years of sustained genius were followed by the fate shared by most pop-culture characters—boom years mixed with bust years, moments of visibility crushed by moments of embarrassment. Kirby left first, and Lee followed soon after. Like Kermit without Jim Henson, though the initial spark of inspiration dissipated, the characters’ iconic status forced them into an ongoing sequence of creative recycling. Sometimes, as with intermittent runs on their comic book by the likes of John Byrne and Mark Waid, the results took the initial sandbox and expanded upon it. In 1994, a film was produced by Roger Corman which, like Fant4stic, existed largely to maintain the film rights to the characters. Never released and available only via bootleg or pirated file, the film established the second-rate status of the characters’ film outings that is still being echoed today. But in 1994, comic-book films still largely served as flimsy promotional material for their source material. The situation has been all but reversed today, leaving decades of publishing history irrelevant if the films are garbage. And so Fant4stic arrives as the visible iceberg of supposed disaster. Rumors tell of Trank fired from his own film for being a destructive menace. Bryan Singer, the godfather of the X-Men franchise, anticipates  a crossover between the Fantastic Four and that much more marketable property, making this film seem even more like an advertisement for its own, far-more-anticipated sequel. How could casual viewers, whose encounter with these characters has been limited to Redbox menus and subway ads, conclude that these characters are anything but “the road company”? More importantly, how can we continue to justify their place in pop culture? 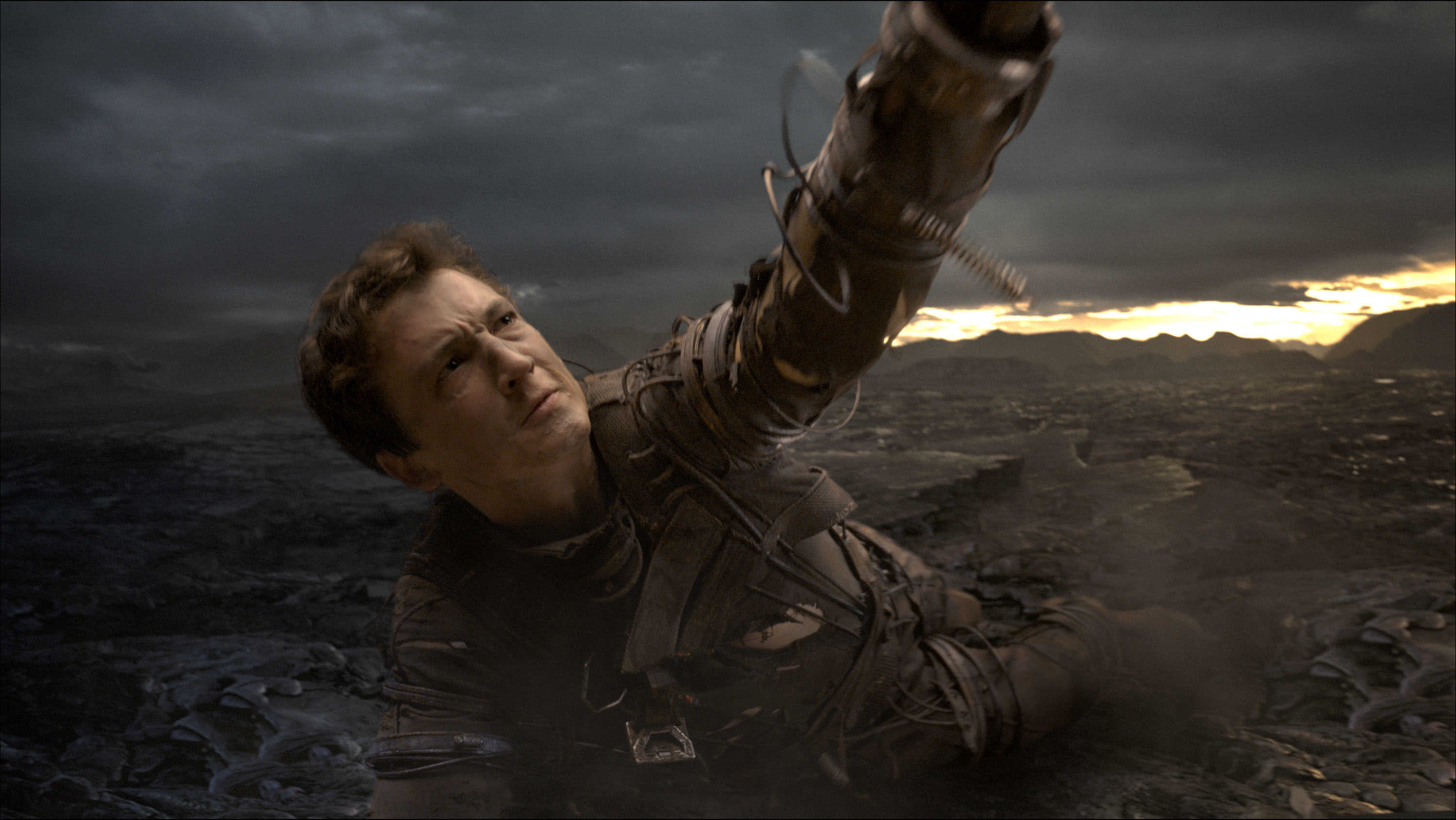 Marvel’s earliest comic books were chiseled out of existence in sweltering New York City apartments by sleepless men living on beer and sandwiches while they typed and lettered and drew a universe out of nothingness. Some of the characters they made are still with us, but only through a miracle of longevity, a journey across generations, through iterations, mediums, reimaginings, cinematic adaptations. Ub Iwerks animated the first Mickey Mouse cartoons by hand, with hour after hour of obsessive drafting. Now travel to Anaheim or penetrate the Orlando orange groves. What remains of that explosion of effort? Decades of sustained marketing (along with successful lobbying of intellectual-property law) have kept the character visible. But what of Iwerks’ initial ember of inspiration? Does it linger in the merchandise? Or does inspiration have a half-life?

The question is not how good or bad Fant4stic will be, nor how inevitable its sequel will be or how significant its box office. The question is to what extent every ball can remain in the air. This is what happens when we don’t recycle our characters. Do we expect these figures to stand forever? The Fantastic Four have spent decades battling an armored dictator named Doctor Doom; Fant4stic reportedly makes him into an evil blogger. Is this evolution—a necessary updating, an endless pursuit of relevance—or is it entropy? In some versions of the character, he is a vain man with a small scar on his face. He forges a metal mask to hide this tiny flaw. In his haste to wear the appliance, he presses the still-molten metal to his face, permanently disfiguring himself. This isn’t just a story. It’s a lesson about vanity to rival the drowning of Narcissus. It feels like it could age as well as Icarus, lasting for 1,000 years without ever losing an iota of its resonance. Does that leave The Fantastic Four’s film rights holders as doomed as Sisyphus, the titan cursed to forever roll a boulder up a hill only to watch it roll down the other side again? Or is a there a point where the story jettisons the medium and gains weightlessness, where it becomes like a kind of constellation? There isn’t room in the sky for every star to burn forever. Eventually, the sky determines.

One thought on “We Were Once A Fairytale: On The Fantastic Four”