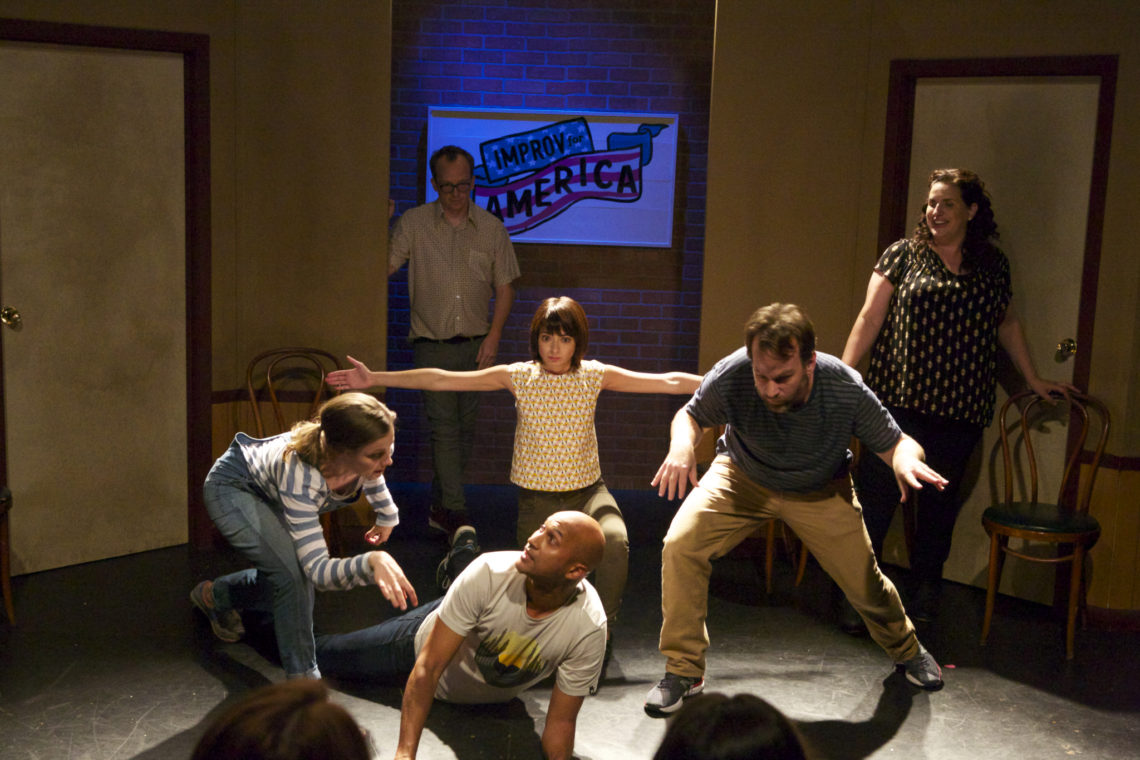 “Don’t Think Twice” and The Metrics of Comedic Success

To be involved in comedy is to be immersed in a culture of success. At any given time, you or someone you know is living on the cusp of it. Someone is landing an agent or a manager, or a rival improv team gets bumped up to a weekly run based on a weekend night. In the same way scientists and engineers might judge science fiction (see: any Neil deGrasse Tyson tweet) or historians look at period piece dramas, watching Don’t Think Twice as a comedian was daunting for me. But writer-director-actor-comedian Mike Birbiglia’s second feature film is a smart, funny, and empathetic look at success in comedy and how it looks and feels to six New York City improvisors.

There’s a scene in Don’t Think Twice in which members of the improv group The Commune sit down to watch their former member, Jack (Keegan Michael-Key), on his first episode of “Weekend Live”—the film’s equivalent of Saturday Night Live’s news sketch. After Jack’s performance, the members of The Commune lean back, unamused. Allison (Kate Micucci) tries to explain it, saying something to the effect of: “It was jokey, I guess, but it wasn’t really funny.”

It reminded me of the first time I saw a comedian friend on TV. I remember turning to my roommate at the time and saying, “That’s it?” To be on television is huge. It’s a profound accomplishment. I haven’t ever been on television, and yet, all I could muster was an odd mix of jealousy and happiness. There was someone I knew, someone who made me laugh all the time for hours on end, on screen for five minutes, and it made me half-chuckle once. 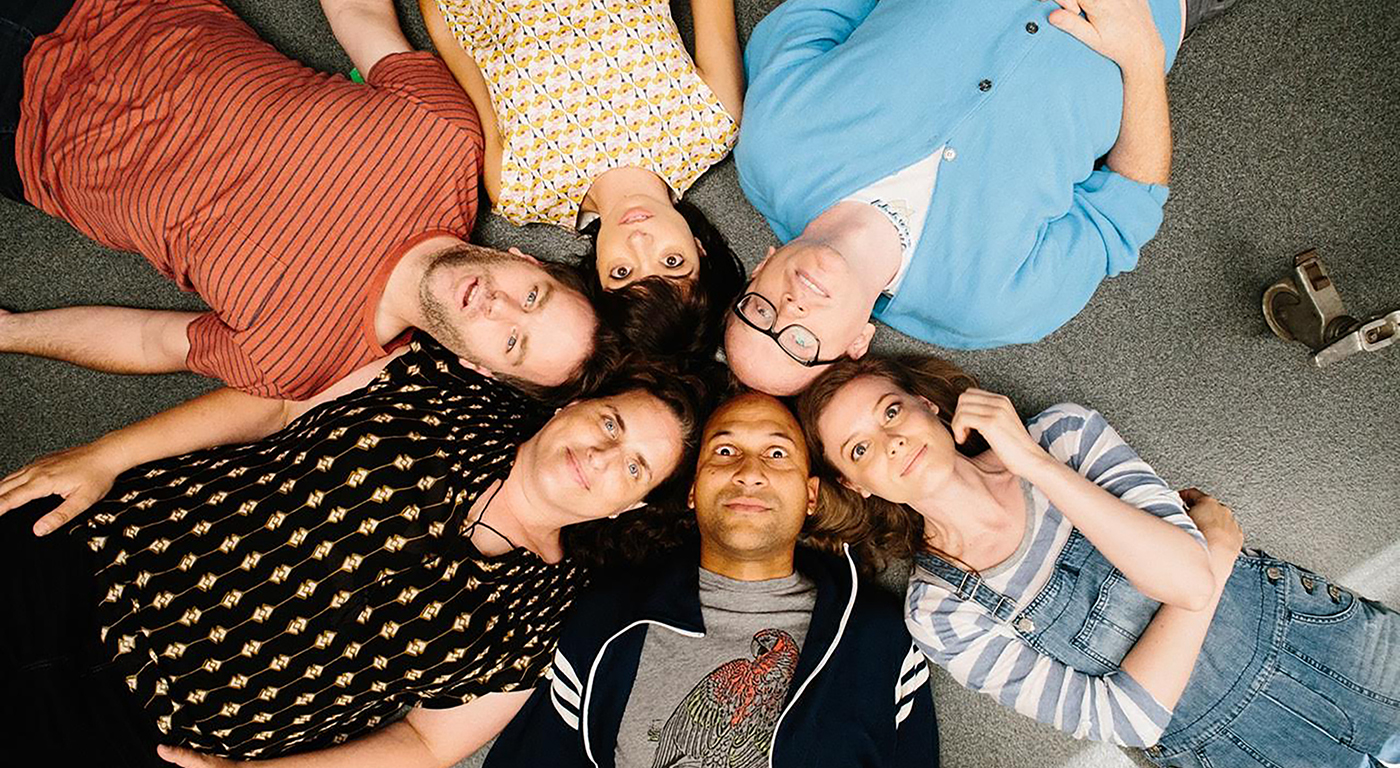 There hasn’t been a comedy film in a long time—if ever—that reflects the profession for what it is: a whole lot of work. I mean, it’s work. It’s a job that isn’t one. Miles (Mike Birbiglia) is the hardest working member in The Commune. He’s the oldest. He taught members of the team everything they know, and yet they’re the ones who reap the rewards. He’s defensive when Jack shows off in front of the crowd on the night The Commune performs in front of the “Weekend Live” cast. Improv is supposed to be collaborative—it’s not meant to showcase one person. And yet, it’s undeniable that when Jack shows off, it’s something worth showing off. He gets called for an audition and cast on the show. That’s that. Jack moves up, and the rest of The Commune is expected to carry on with one member missing.

Like any artform, comedy is filled with petty jealousy. You’ll always have rivals or people who seemingly get ahead without half the struggles you put into it. The second Jack experiences mainstream, tangible success, his relationship to the group changes immensely. He’s not as present. He’s a little condescending. He doesn’t mean to—and the film does portray Jack as a genuinely likable, if not a little showy, performer—and yet he can’t help but come across that way.

Similarly, after many members of the group submit writing packets for a television show, only Lindsay (Tami Sagher) gets a writing job. There’s immediate outrage from the group, especially from Bill (Chris Gethard) and Allison, who worked together on their joint packet. Lindsay lives at home with her parents who pay for everything around her. It’s not fair, Bill and Allison argue; she doesn’t actually know how to work. Privilege is an undeniable presence in success. I remember being fresh out of college working a food service job and going broke paying for comedy classes while peers of mine were getting work published in McSweeney’s. They didn’t have to work, they lived with their parents, and in turn, I realized, they had all day to work. But there’s nothing moral about doing a lot of work. It’s just something you do. When success comes, you want to say, “it’s deserved,” and inflect a moral weight onto it. The reality is, success comes to whomever’s packet was liked the most.

That’s not to say the end of the road is getting cast on or hired to write for a show like SNL. Don’t Think Twice uniquely tackles the myth and the mystery around the the famous NBC comedy sketch show. For so many people, comedian or not, SNL is the landmark of comedy jobs. From an outsider’s perspective, there appears an unparalleled camaraderie among SNL cast members: these are people who get to hang out and write sketches with friends, all the while meeting celebrities and musical artists, every single week. For a comedian, the dream of being on SNL is a little trickier to explain. It seems like an awful lifestyle. It seems exhausting and stressful with so many stakes for so few rewards. For a show with so much cult status, there’s high pressure from the outside looking in as well as the inside looking out. 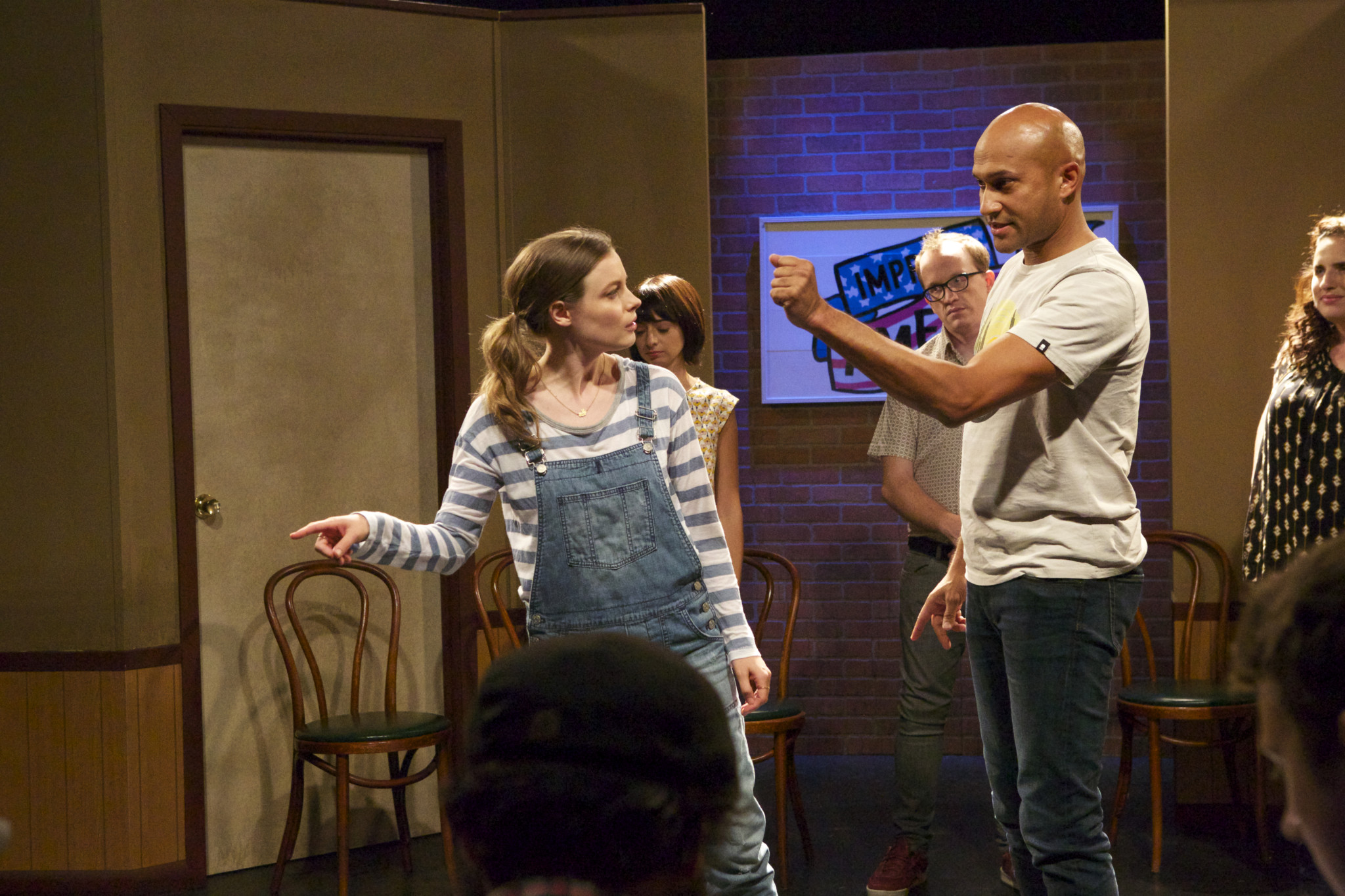 As Miles explains in the film, it’s the number-one sporting event for the live comedy world. Comedians watch, skeptically, barely laughing, trying to figure out which sketches are working and why, and which cast members are good and why. There’s barely any enjoyment in the 90-minute comedy show. When Jack lands “Weekend Live,” he’s expected to prove his worth week after week. Not only does he face judgment from his fellow cast members and bosses, he must prove himself to his close friends, as well as the outside world. There’s an abrupt shift in tone from the way Miles and other The Commune members talk about sketches on “Weekend Live” to the way they discuss each other’s work. It’s easy to sit back as a critic of a show, announce who and what you find funny or not, without any personal stakes. When you know someone you used to work on bits with––or teach, as Miles finds––the line between constructive criticism and normal criticism gets muddled. So much of comedy is working and reworking and tooling and retooling. The more success we have, the larger the scale, the more harsh and impersonal we can be with our opinions.

As Jack wades through the unknown waters of success, his girlfriend Sam (Gillian Jacobs) tries to figure out how to maintain any semblance of consistency. She’s also called to audition for “Weekend Live,” and while she works just as hard as Jack on her characters and impersonations, she can’t do it. Sam walks out during the audition and goes to the park to sit and think for a while. Sam knows it isn’t right for her. “Weekend Live” (or SNL) may be the end-all, be-all for so many comedians, but certainly not all of them. She wants to stay where she is, and if it means backing out of what could be the most important audition of her life, so be it.

There’s a weird subsection of people in comedy who are happy to only perform comedy. They’re not pushing their way through to get auditions or land agents. And to someone like Jack, experiencing all the stressors that newfound success brings, it doesn’t make any sense. Where’s the ambition? Where’s she supposed to go? “That’s it?” someone like Jack wonders about someone like Sam.

Sam reminded me of a group of performers from a smaller city I met earlier this year. “Do you guys have plans to move to New York or L.A. or anything like that?” I asked them.

“Nope, we just like being where we are,” they said. 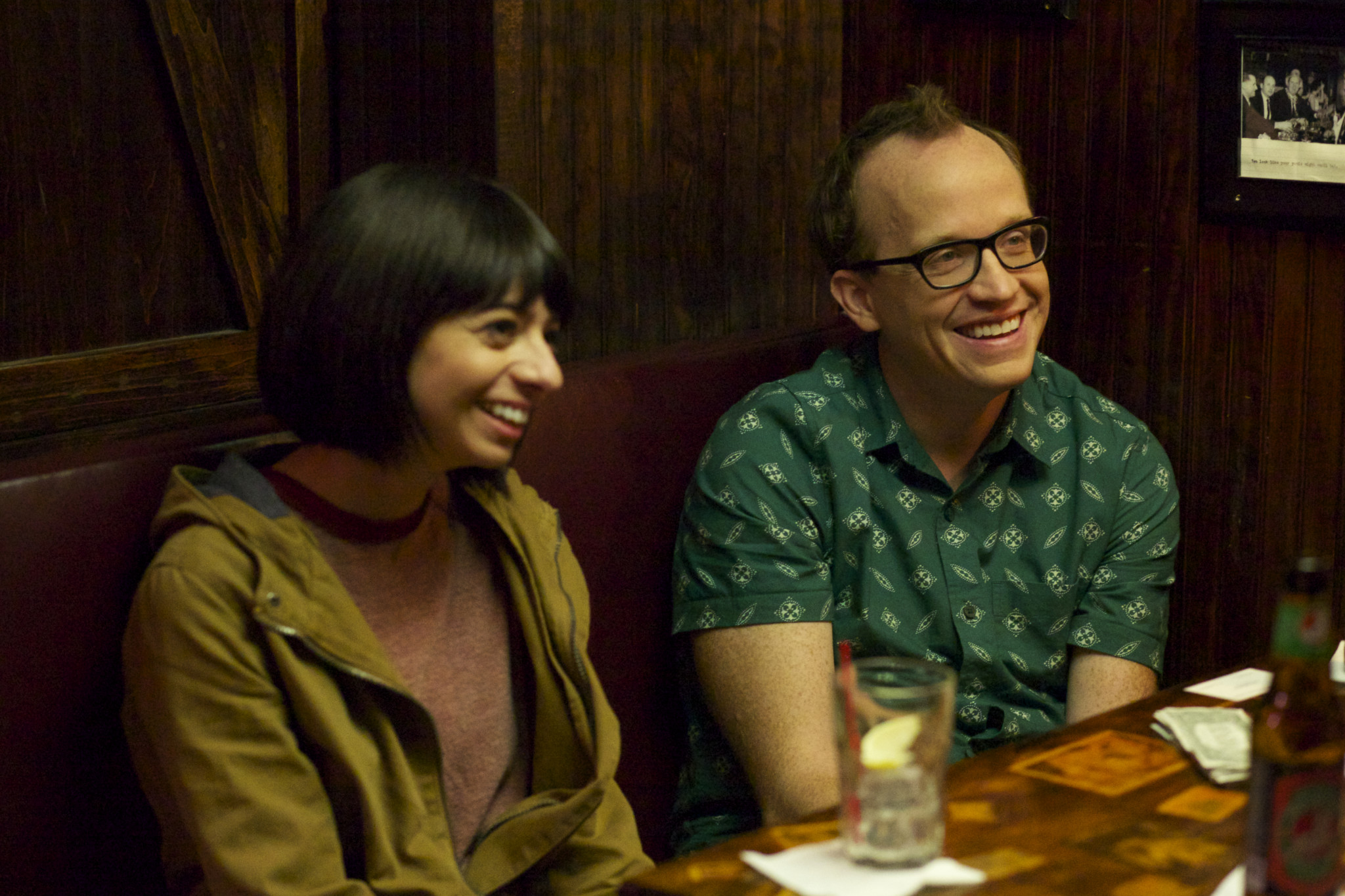 There was immediately an uneasiness between us, because my metric for success involves moving to a coast, getting a job in the entertainment industry, and “making it” in the most traditional sense. Their metric for success was … Where they are right now. We’re all doing the work, but striving for different results. They felt like this was their peak, and I felt like I was really just starting out. When you’re surrounded by success, you are somehow both obsessed with and desensitized to it.

And so what happens, exactly, when success surrounds you, yet never belongs to you? What’s left? Don’t Think Twice has answers to that question: it’s the photos of performing groups posted in a comedy theater, it’s the ritual of touching a wooden bear before going out on stage, it’s the casual pats on the back after a set, it’s promises to your team that you’re there for them. It’s the meaningless gestures and reassurances that keep everyone going. In my first sketch show, we chose Maroon 5’s very bad “One More Time” as our introduction song. It’s been years now, but on the off chance I hear it on the radio, I’m often in tears instantly. There’s joy in doing the damn work. When there’s joy in success, it’s only because it means there’s room to do more work, bigger and better and weirder work. Success is just a series of steps within the work. You still have to keep going once you get there.

I went to see Don’t Think Twice on a Saturday afternoon with one of my oldest comedy friends. We went to enjoy the movie together, of course, but also for moral support. We were certain that something about it would send us off into an existential comedy crisis. Instead, about 20 minutes into the film, we grabbed each other’s hand. Someone we knew was on screen. Someone who used to be a staple in the Chicago comedy scene, and he had lines and a name and everything. “Oh my god,” we kept whispering back and forth, admiring his success. Occasionally, in the mess of success, interpersonal politics, joke analysis, and conflicted feelings, you see someone you know on the big screen. There’s success. That’s it. It’s possible, and it was right in front us.