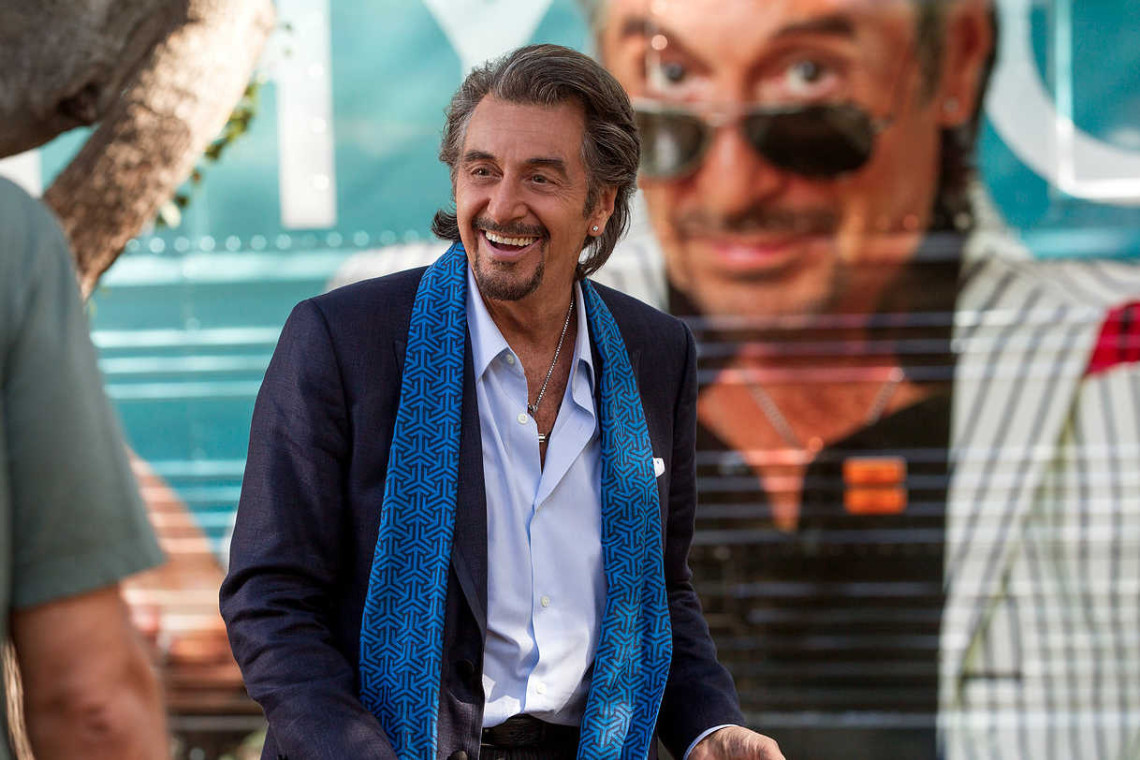 “When have I ever let you down?” asks Al Pacino as the title character at a crucial moment late in Danny Collins. It’s the biggest laugh I’ve had at a movie in quite some time, and one that brought the house down the way I haven’t seen in ages. The line itself isn’t a joke, but it comes so purely and directly from the character and from the audience’s investment in him over the previous couple hours that this seemingly unassuming line becomes a sublime payoff so much funnier than any punch line.

Because you see, Danny Collins lets everybody down. Always. We’re told that once upon a time, in the Jurassic-era 1970s, he was a sensitive, up-and-coming singer-songwriter, seduced away by easy money and catchy, manufactured pop jingles. Forty years later, he’s pushing his third Greatest Hits album and touring to sell-out arenas populated exclusively by blue-haired Golden Girls. (Think Neil Diamond without the writing talent, or maybe Barry Manilow crossed with late-period Rod Stewart cheeseball swagger.) Danny’s a piece of work, lacquered in a bronze spray tan and horrible hair dye, with his shirt unbuttoned halfway down to his girdle, parading around like a peacock in an array of garish, turquoise scarves.

We see “Danny Collins Sold Out” on a Madison Square Garden marquee, and boy, did he. The cock of the walk with a ditzy blonde bride-to-be maybe a quarter of his age, Danny gets along on a steady diet of whiskey and nose candy, blowing lines and chasing broads, surrounded by sycophants with the only naysayer being his longtime, long-suffering manager (an exquisitely deadpan Christopher Plummer) sighing bone-dry party observations such as “I can see your fiancée’s vagina…again.”

It wasn’t always this way, and it turns out Danny was sent a fan letter—never received until now—from the one and only John Lennon back in 1971, urging him to stay on the straight and narrow. The belated delivery prompts an extremely tardy mid-life crisis, with our hero pulling up stakes, cancelling his tour and moving into a suburban New Jersey Hilton, so determined to write his own material again he has a grand piano delivered to his tiny room.

Danny has the kind of epiphany most movies save for the third act, except he has it here in the first. What makes writer-director Dan Fogelman’s debut feature so special is that it pays particular attention to the emptiness of this character’s big talk (Danny swears off his old life of drinking and drugs while roughly 12 Scotches deep at the hotel bar) and just how difficult it can be to teach an old dog new tricks.

Pacino is a joy to watch, the outsized charisma and those haunted, puppy-dog eyes combining for a character who is always “on” and never not delighted with himself, except when he’s sinking into a pitch-black zone of self-disgust. He takes an instant shine to Annette Bening’s uptight Hilton manager, chasing her with dogged, hilarious determination as she finds a million different amusing ways to say “no.” Their chemistry is electric (but then, when has Annette Bening ever not had great chemistry with somebody?); the two get soused one particular evening in a volley of goofy improv bits, and I swear I could have watched them all day. When Pacino trumpets to his beleaguered father-confessor Plummer that he’s finally romancing an “age-appropriate” woman, the old man doesn’t hesitate to point out a slight discrepancy in his protégé’s math. “Baby steps,” Danny responds, with a smile.

In a bid to try to make amends, Danny tracks down his son (Bobby Cannavale) from a one-night stand with a groupie some 35 years ago, assuming he can just breeze in, toss some money around and solve everybody’s problems. It turns out to be just a tad trickier than that—or in his own words, “a lot fuckin’ harder than I thought it would be.” Some things you can’t just write a check to cover, and this late in the game, Danny has to learn how to be a grandfather, to be a dad—to just be there, period.

Nothing is easily achieved here: Danny’s a screw-up and a coddled child accustomed to getting his own way. As Plummer explains, “He’s got a good heart. It’s just up his ass most of the time.” I laughed a lot during Danny Collins and I cried a little bit, too. This is a hugely entertaining, mainstream crowd-pleaser about how we can all try to be our better selves, fail spectacularly, and then pick ourselves up and try again. Baby steps.