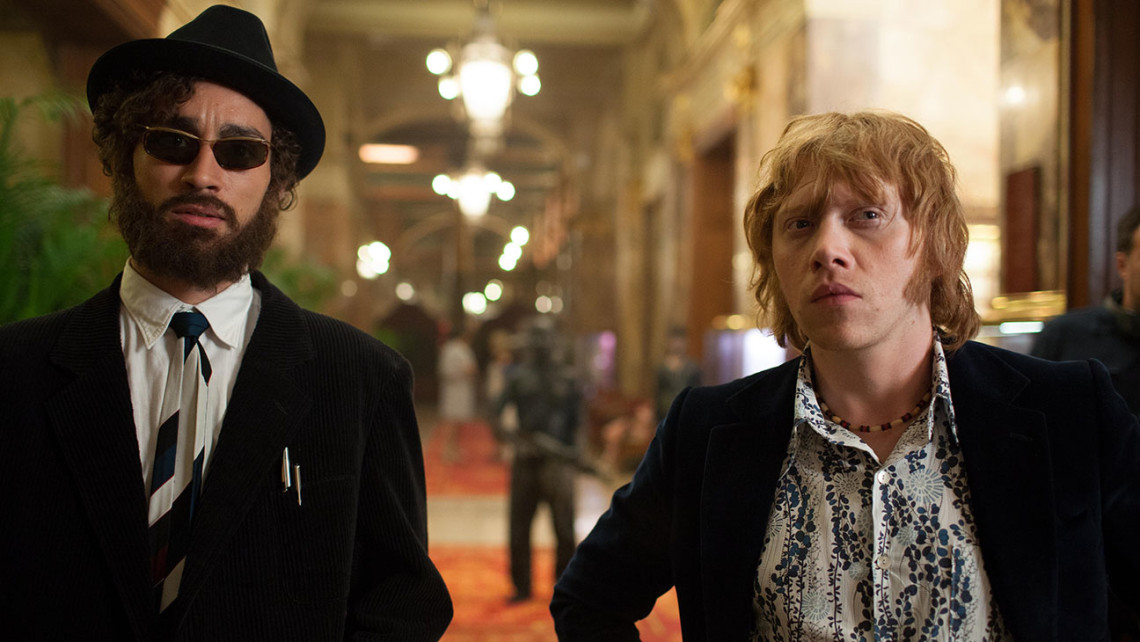 This Week’s Cinema: “Moonwalkers” and “Band of Robbers”

Traditionally, January is a time of casting off the old and ringing in the new. It’s a time to make a fresh start full of hope for the future. Not so much for the movies. In terms of the release cycle, January has become a nega-space dominated by late-2015 releases opening wide outside of their limited Academy Award-qualifying runs. The awards season is an exhausting exercise—at the time of publication, we are smack in the middle of Golden Globes afterglow and pre-Oscar foreplay. It’s a constant cycle of chatting up the same set of contenders favored to win.

With critics’ eyes on the awards buzz until the end of February, it’s an opportunity for distributors to slip their less-than-stellar offerings into theaters, perhaps with the hope that a dud will go relatively unnoticed, lost in the shuffle of awards-season think-pieces. This week on the marquee are a couple of light, goofily high-concept movies from both sides of the Atlantic: the British farce Moonwalkers and an American indie, Band of Robbers.

The urban legend that the US government actually conscripted Stanley Kubrick to fake the Apollo 11’s famous moonwalk is so delicious that it’s a wonder a movie version hasn’t yet been tackled. In Moonwalkers, Antoine Bardou-Jacquet’s debut feature, Rupert Grint (still looking eternally youthful from his Harry Potter days) is Jonny, a hapless manager of a groovy band in swinging 1960s England. Deep in hock to a local gang, he lucks into a lucrative opportunity to help stage the moon landing at the behest of CIA agent Kidman (Ron Perlman).

It’s a set-up rife with possibilities, yet Bardou-Jacquet manages to squander all of it, veering wildly between farce and abject violence. The jarring tonal discrepancy is divided between the two leads: Grint plays the film as comedy, while Perlman metes out Guy Ritchie-levels of extreme violence as a deeply traumatized Vietnam vet. Even that aspect of Perlman’s character is wildly inconsistent. He flashes back to atrocities committed during the war with revulsion and regret, yet seems to show no compunctions upon blowing away the heads of Mafioso grunts in a firefight. In the midst of all the farcical ridiculousness—a subplot involving Jonny’s band filming a space-themed rock opera in the middle of the ersatz Apollo mission being among the worst—the film asks for an emotional investment in its characters that is never satisfyingly earned.

Oddly, Moonwalkers is not the only “faking the moon landing” movie slated to arrive this year, as Matt Johnson, director of The Dirties, will be taking his long-awaited NASA-infiltrating follow-up Operation Avalanche to Sundance. Now that I’ve seen Moonwalkers, I feel secure in saying that Johnson has nothing to worry about in Park City later this month.

Speaking of Sundance, the Nee Brothers’ Band of Robbers fares slightly better as a cutesy combination of two American treasures: Mark Twain and Wes Anderson. The Nees pull significantly from Anderson’s Bottle Rocket in their modern retelling of Tom Sawyer (co-director Adam Nee) and Huckleberry Finn (Kyle Gallner) as a pair of scrappy man-children. In this version of the story, Huck is in the clink for a minor offense while Tom has failed upwards as a member of the local police force. When Huck is released on probation, Tom hatches a plan to rob “treasure” from a local pawn-shop. Their plans, predictably, go awry.

Like Moonwalkers, it’s a charming enough idea and the Anderson-lite production design fits perfectly in the wheelhouse of the minor American indie flick. But in relying so heavily on the Twain source material, Band of Robbers shoots itself in the foot. Famous Twain plot points are shoehorned around the crime caper plot, regardless of whether or not they fit organically into the story. All principal players are accounted for, including Becky Thatcher (Melissa Benoist of “Supergirl” fame) as “Judge Thatcher’s daughter” and Tom’s rookie partner whose only role is to react to (and inexplicably crush on) Tom. Stephen Lang, as a white Injun Joe, is a cipher of bland villainy, and often the subject of multiple unfunny jokes about cultural appropriation. Even whitewashing the fence is referenced in the title font design. Band of Robbers stinks with the desperation of trying too hard to be clever while offering few new ideas or innovations.

Moonwalkers and Band of Robbers will certainly not light up the box office this weekend, but are perfectly serviceable as respites from the blare of snubs and awards commentary. But if your eye is on Oscar gold, your time is better spent catching up on the favorites of last year.