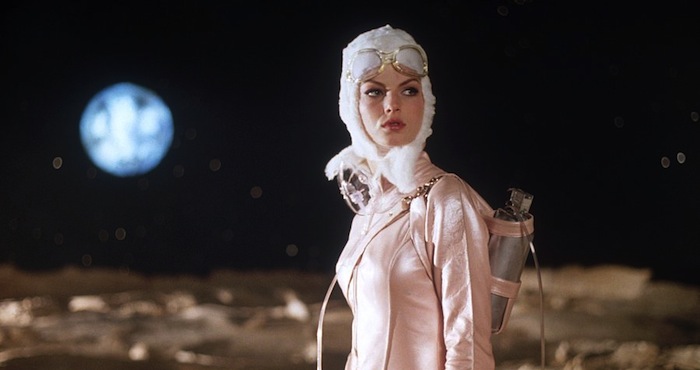 The evolution of movie trailers is as relevant to the state of cinema as the films themselves. At some point, crafting a trailer came into its own as an isolated art form. Obviously a trailer cannot exist without the film it’s designed to promote, but while trailers must be packaged into miniature narratives, cutting them could prove trickier than piecing together a feature, which could potentially breed revolutionary results.

Until the ’60s, movie trailers played out more like infomercials. They came so bloated in length (closer to five minutes as opposed to today’s typical two), and spewing the kind of lavish praise for its own product rarely found outside of an infomercial script. Over-the-moon descriptions of the film’s quality come rolling across the frame in big swirly typeface, all without a single annotation. No critic actually printed those words. Those quotes aren’t lifted; they’re invented by PR writers. Imagine if the promos for The Big Wedding eschewed favorable review snippets (if any could be found, that is) and instead employed that voiceover guy who sounds like he’s been chain-smoking industrial smoke stacks to read directly from the film’s press release touting its “Humor!” “Heart!” and “Public Appeal!” over scenes of rampant racism, flagrant sexism and Robert DeNiro in a bathrobe. Talk about misleading viewers.

With their technical limitations, older films arguably lacked visual flair, so selling them to the public as something more than a filmed stage play required a little playful futzing at the editing bay. By the early 70s, with such propellent auteurs dominating the screen and the future of the medium, the approach to constructing a trailer would shape-shift along with new cinematic rules anchored by the likes of Martin Scorsese, William Friedkin, Francis Ford Coppola and, perhaps the most singular of that crew, Stanley Kubrick.

The teaser for Kubrick’s A Clockwork Orange turns the needlessly long trailer model of old inside out. In just under a minute, we are bombarded with images from the film, inter-spliced with tantalizing, accurately descriptive words such as “FRIGHTENING”, “COMIC”, “BIZARRE” and of course “BEETHOVEN”, all set to the frenetic William Tell Overture in a hyper strobe collage that likely gave Gaspar Noe his first erection. In a nod to that trailer, Austrian filmmaker Michael Haneke purposefully mimicked Kubrick’s format for the 2007 shot-for-shot American remake of his own sadistic chamber essay on violence, 1997’s Funny Games. The excitement generated by Clockwork’s brief trailer is fulfilled tenfold by the manic, profound-for-all-time feature.

The best trailers give merely a taste of the film they’re selling. They don’t misrepresent the film by establishing a false energy or tone, or by including scenes that don’t appear in the final cut. It would be wisest for the director(s) to cut his/her/their own film’s trailer, as no one understands the film’s intent better. The Coen Brothers, for example, always produce great, safe trailers which faithfully represent their film. They provide a taste to entice the viewers.

The teaser for 1998’s The Big Lebowski features a kaleidoscope of clips under one of the soundtrack’s central songs, Kenny Rogers’ “Just Dropped In”. The barrage of quick scenes that silently play within small, disjointed squares hints at absurdist pandemonium and the most gleefully slapdash story the Coens had offered up to that point. It’s also worth noting that the most-widely celebrated aspect of Lebowski is its dialogue, and this teaser contains nary a syllable.

It’s not uncommon for trailers to tease footage that won’t wind up in the final cut, but some are so brazen that they take that notion even further by featuring no footage at all. No, I’m not referring to those cheap plugs for anticipated releases that show up in theatres long before any footage is even shot and are nothing more than elaborate title cards. I’m talking about trailers that choose to represent their film as an extension of it, in form of a short film. The trailer for Hampton Fancher’s ultra-forgettable 1999 neo-noir The Minus Man is so riveting, so sinister, so satisfying, there’s no possible way the film could live up to it. Imagine a couple on a date leave a theatre showing The Minus Man and spend the night-into-morning discussing, debating, dissecting the film. As the sun comes up, the woman suddenly realizes how much time has passed and hurries off in a panic. The payoff beyond delivers, something that the actual film, with an incomprehensible cast of Owen Wilson, Janeane Garofalo, Brian Cox, Dennis Haysbert and Sheryl Crow, aggressively neglects to do.

But perhaps the worst, most egregious crime a trailer can commit is overselling. They’re the kind of trailers you re-watch after seeing the film and say, “I want to see that movie.” I understand that movie trailers adhere to the general schematic of advertising, but if sold honestly, art is more likely to reach, if not the widest audience, its intended audience.

No trailer makes me yearn more for a movie that doesn’t exist than the trailer for Roman Coppola’s CQ.

The denial created by this rousing trailer is such that I still think back fondly on seeing the film. Not the film that got released, however, but the one I fantasized about for months after seeing the trailer. I was 16, and in my formative years as a film buff and aspiring filmmaker. I was aware of the Euro-sexy spy/space genre of the 60s, but had yet to delve in. Regardless, I had never seen anything like what the trailer for CQ was promising. It was my first favorite-before-seeing-it film. What irresistible fantasies this trailer provided for a painfully caucasian suburban teenager: American in a foreign land, in an infinitely more carefree past, involved in a weirdo sci-fi film, fantasy bleeding into reality, beautiful women, espionage (in space!), laser guns, adventure, gadgets, more laser guns, vespas, and layers upon layers upon layers of glorious cheese.

CQ delivers these ingredients, but Coppola (son to Francis, brother to Sofia) gets the serving sizes wrong. The trailer for CQ is a compulsively watchable couple minutes that sets up the story, the setting, the conflict, all but spilling the resolution. What it also leaves out are the crawling talky scenes that trudge forward some hint of a story on a meandering path of indulgences and unfounded observations. For example, Coppola’s idea of downplaying his pampered upbringing is providing the movie version of his father with the occupation of a doctor instead of a renowned filmmaker.

Coppola’s mistake isn’t setting the film in 1969 (the year he turned 4), his mistake is setting his own personal story there. The exchange is right there at the top of the trailer: “I’m trying to make my personal film,” says the protagonist played by terminally soporific Jeremy Davies. “But what if it’s boring?” astutely asks his French girlfriend, played by a similarly tranquilized Élodie Bouchez. Coppola strands the audience in his perfunctorily dreamed-up version of ’60s Paris, with a cast of his relatives and dad’s buddies who have all gathered for a glorified student film. His attempt is commendable but the result insipid and meaningless, always hinting at a much more spirited twist on the seductive elements he nearly abandons by the wayside.

CQ is one of many films that succumb to their own generated hype, albeit on a much smaller scale than we’re used to. CQ was never going to be a hit, and even with a more honest trailer it may not have made more than the paltry $414,000 it closed out with. Maybe no one suffered the same level of hype that I did. Maybe no one revisits this trailer with such fondness or with such frequency. I know it’s descending a staircase to nowhere re-watching this trailer, but in a way it’s comforting to pretend that film is still going to come out someday. And who knows? Maybe someone will make it without even intending to, and no one but me will realize or appreciate it.

There are films that help shape one’s perception of cinema. They invigorate and cement a personal preference of style, filmmaker objective, technique, themes and so on. Usually they are films imposed upon us at an early age, or happy accidental discoveries. Evil Dead II was a big one for me. As was Woody Allen’s Annie Hall, Terry Gilliam’s Brazil, Ingmar Bergman’s Through a Glass Darkly, and, due exclusively to its trailer, the ghost of CQ forever haunts that list.

What are some of your favorite better-than-the-movie trailers?