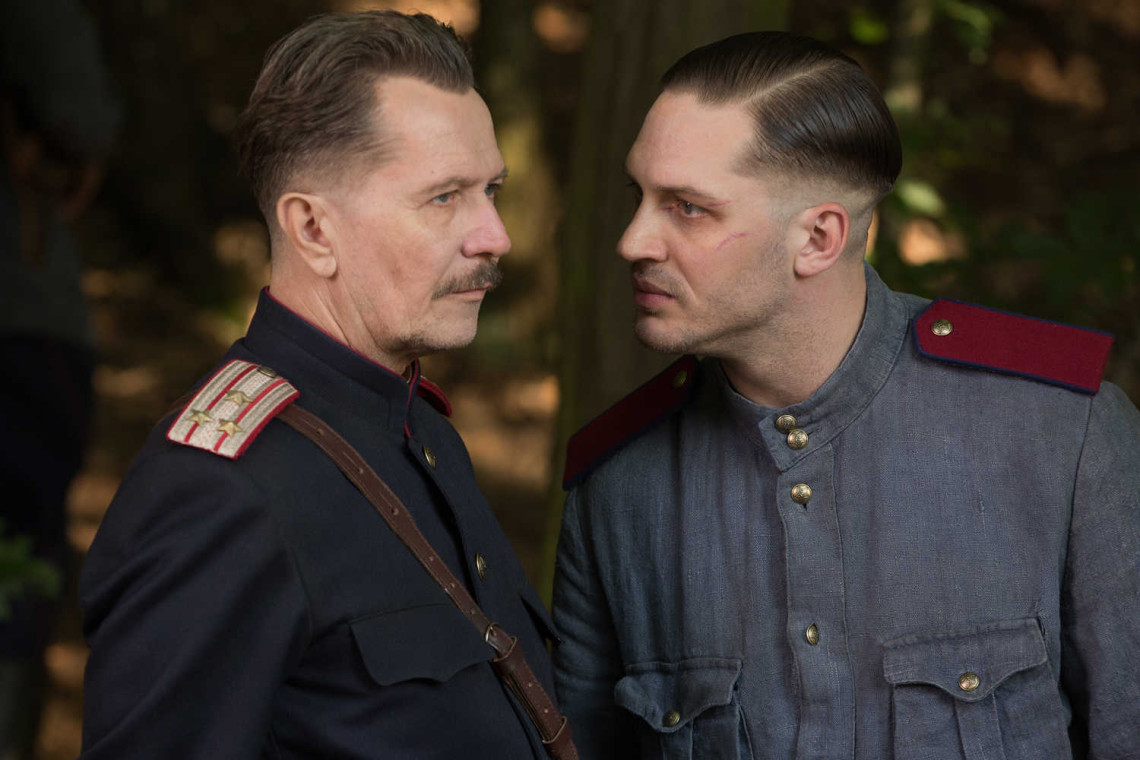 A child gets brutally murdered, but the case will never be looked into. It was a fatal train accident, you see. The dead and the living – everybody knows, but no one will tell. Why? Because “there can be no murder in paradise.” It’s the early 1950s in the USSR and murderous cravings are strictly western, a “capitalist disease,” as one on the protagonists, a secret police apparatchik points out.

Child 44 tells a story of MGB officer Leo (Tom Hardy). A runaway, hungry orphan roofed by a Soviet soldier, Leo was raised by the system and rose to prominence within its frame. Now a grown man, he follows its orders blindly, never questioning what has to be done. When his friend’s son falls prey to an evidently degenerate murderer, he’ll still file the false “train accident” report despite knowing it is not morally right. But it’s the first crack in the MGB knight’s armor, the beginning of a series of events – turns out later, an aftermath of an inside power play – that plant the seed of doubt. Step by step, he uncovers his “family” flaws – and brutal strength. When his superiors decide to test his obedience by making him denounce his beloved wife Raisa (Noomi Rapace), he refuses to conform. In doing so, he again becomes an orphan and begins his quest to identify the killer, an enemy.

Both Richard Price’s script and Tom Rob Smith’s book were inspired by the true story of serial killer Andrei Chikatilo, nicknamed the Butcher of Rostov. The filmmakers decided to take the story back in time – the film takes place in the Stalinist era, 20 years before Chikatilo started his murderous spree that claimed more than 50 innocent lives. This move proves worthy, creating an interesting moral dilemma, making the movie more metaphorical and layered. Apparently, the Russian Federation did not appreciate such manipulation – Child 44 was banned by the Ministry of Culture only a few days before its planned premiere. The film was deemed “harmful and unacceptable.” Judging by this decision, one could think not much has changed since the times in which Child 44 takes place.

Attractively shot and passionately acted, the film delivers an engaging and nuanced spin on a coming-of-age scheme. Leo might be well in his thirties, but only now he’s becoming his own man, learning to discern and name emotions; make independent, intutive decisions; and follow his own ethical compass. Hardy and Rapace complement each other well – their onscreen partnership is a delicate dance routine, with each trying to find the balance and succeeding in doing so subtly, with great mutual focus. Child 44 provides an interesting insight into the grim period of Eastern European history. The set design is more than impressive; it’s almost tangible, physical.

On the other hand, the film can often come across as disorienting and uneven. Too many significantly introduced – then left aside – protagonists and intertwining plotlines, leave the viewer confused. It’s easy to imagine how lost someone from outside of the region, for whom some facts are not at all evident, can feel when confronting this dense tissue. The international cast of supporting characters is a team of winners and losers. Joel Kinnaman may try all he wants, but his character, Vasili, is made of cardboard and even an electroshock therapy could not help him breathe. Vincent Cassel’s and Paddy Considine’s characters are barely sketches – superficial and cliché. An interesting detail: except for the leads, most of the actors sport their own interpretation of a Russian accent. Some succeed, but some fail miserably. For example, there’s Gary Oldman, whose character sounds like a BBC radio host.

Despite what the Russian Ministry of Culture claims, when it comes to entertainment and storytelling value, Daniel Espinosa’s film Child 44 is not “harmful and unacceptable.” Sadly, the ambitious director got crushed by the complexity of material yet he managed to rise again. The effect is sinusoidal as the lifeline of a person in such circumstances.