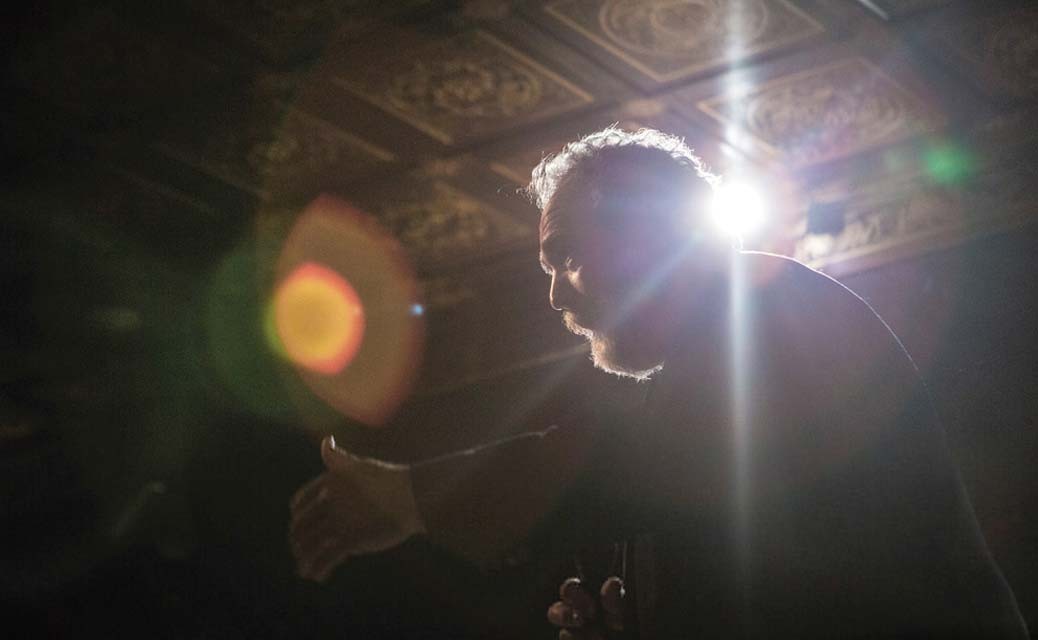 A hulking bear of a man with a handlebar moustache takes the stage, puffing on a cigarette and swigging from a bottle of beer, announcing: “So I’ve been on kind of a health kick lately.” The man is Barry Crimmins, the “comedian’s comic” who helped launch Boston’s standup renaissance in the late 70s and early 1980s. Back in that antediluvian age before YouTube and podcasts, Crimmins was one of those performers who didn’t find much in the way of mainstream success, yet you heard his name discussed with hushed reverence by anyone in the business who knew what they were talking about.

In 1979, Crimmins founded the Ding Ho Comedy Club in Cambridge’s Inman Square. His friends recall Barry saying, “I found a Chinese restaurant with country and western line dancing four nights a week, they’ll let me do anything!” And so he did, stacking the lineup with a murderer’s row of untapped local talent and brutally critiquing their sets. Barry Crimmins became a brusque, beloved mentor to an entire generation of standup superstars, including Steven Wright, Lenny Clarke, Denis Leary, Paula Poundstone, Steve Sweeney, Kevin Meaney, Dana Gould, and especially Bobcat Goldthwait, who directed the deeply affecting documentary Call Me Lucky as a tribute to his friend.

For about half the movie, it’s a wild ride. Cutting together hysterical archival footage and silly cartoon reenactments with present-day talking head remembrances, Goldthwait captures the headlong rush of that early standup comedy boom, when otherwise unemployable misfits and class clowns suddenly discovered they could make a living telling jokes. Priceless anecdotes include the time Barry and Lenny went to Julia Child’s house at four in the morning on a bender, ringing the doorbell and demanding that she cook them some breakfast. But such massive nights took a toll, with Crimmins noting that the Ding Ho was a good business until “all of my employees became raging cocaine addicts.” Goldthwait credits his mentor with reaching out and helping him sober up for good after a blacked-out rampage made him a pariah in the Boston comedy community.

It’s obvious from the early performance footage that Crimmins’ humor was a poor fit for the jacket-and-tie, airline-food observations that were so trendy in the early 1980s. Intensely political and fueled by a furious anger, he despised Ronald Reagan and viciously railed against the “morning in America” hypocrisy brought to you by “the guys who invented homelessness.” (Barry predicted that Reagan would eventually be commemorated on the million dollar bill, “so his friends will have something to remember him by.”) Obsessed with Iran-Contra, Crimmins visited Nicaragua but while there noted that he would never move out of the United States because he “doesn’t want to become a victim of America’s foreign policy.”

Best described by a colleague as “Noam Chomsky meets Bluto,” this was heavy-duty stuff, and the comic had zero tolerance for audiences looking for mindless giggles. (The hecklers caught on camera here probably still haven’t recovered from the splenetic tongue-lashings they received in turn.) Crimmins’ rage was apocalyptic, and seemed to intensify with each passing year, to a point where friends and family grew increasingly concerned.

Then, one night in the early nineties, Barry Crimmins broke down on stage, explaining to the audience that he probably identifies so much with victims because at the age of four, he was repeatedly taken down to a basement and raped by a friend of his babysitter. His revelation detonates Call Me Lucky, throwing the subject’s unquenchable fury into sharp relief. The film becomes something else altogether – a journey of healing and advocacy, about coming to terms with a horror almost impossible to imagine, and then trying to take all that pain and turn it into something positive. Being from Boston, I was familiar with the broad strokes of Crimmins’ story, but I still wasn’t ready for how deep the film cut.

In 1995, the embryonic America Online had become a haven for pedophiles swapping kiddie-porn in unmoderated chatrooms, while the company feigned ignorance and made a fortune from extended use fees. Crimmins began frequenting the rooms, posing as child and amassing reams of evidence he then delivered to prosecutors who didn’t even have computers in their office yet. His crusade, the pursuit of which caused this survivor the kind of psychological distress one can hardly fathom, ended with the comic exposing AOL’s unconscionable negligence before Congress.

It’s a hard-earned, cathartic triumph to watch Crimmins handling Strom Thurmond and corporate lawyers with mic skills honed from countless hours onstage. (Wearing a beige suit and a Jerry Garcia tie, Barry notes that he “probably looked to them like a California marijuana grower here for his arraignment.”) But Goldthwait tempers the victory with a palpable sadness, never letting us forget how much has been lost.

Truth be told, Call Me Lucky runs about 10 or 15 minutes longer than it probably should, meeting its natural endpoint in a stunning sequence in which the filmmaker follows Crimmins to that basement in upstate New York, confronting the space where his innocence and trust were cruelly stolen. But it’s just a room, not haunted by any ghosts nor providing any closure. (His abuser died in prison years ago.) Barry Crimmins looks around and mentions how many other children who suffered as he did ended up dead or irreparably damaged.

He utters the title of the film, then shuts out the light.