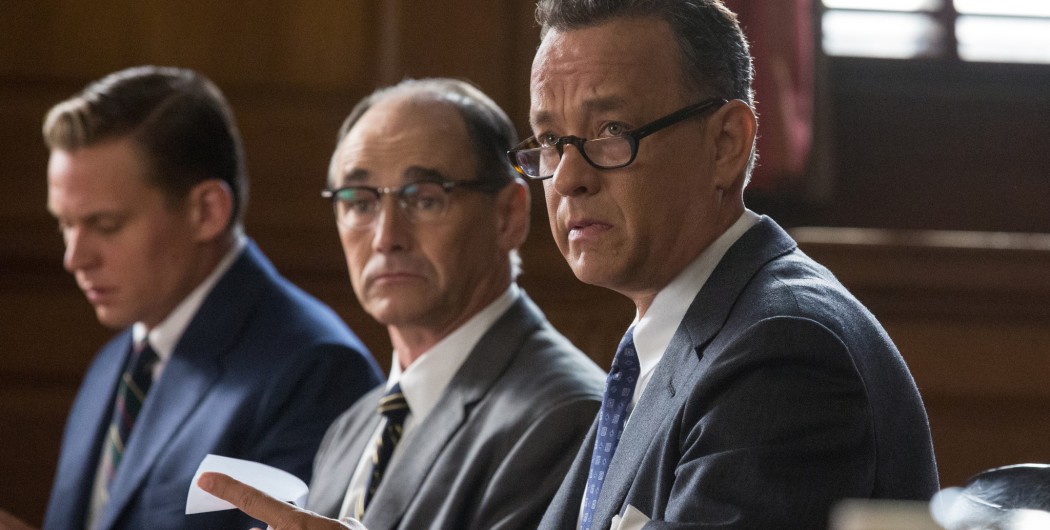 “Bridge of Spies” Is Snarky and Suspenseful

Bridge of Spies is the true story of James Donovan, an insurance claims lawyer tasked with negotiating the release of a military pilot shot down over enemy lines during the height of the Cold War. Directed by Steven Spielberg, with a screenplay assist from Joel and Ethan Coen, it’s as compelling, snarky, and suspenseful as any movie that’s primarily talk can be. These master filmmakers have Tom Hanks at their disposal, and he uses every bit of the gravitas he borrowed from Jimmy Stewart to underplay Donovan’s heroism. From his first scene, Hanks effortlessly reflects the inherent goodness of his character, which is expected. What’s unexpected is the constant stream of humor running through this film. Bridge of Spies is the funniest Hanks has been since he stopped making comedies.

Though Bridge of Spies has over 140 speaking parts and a cast of characters that includes Alan Alda and Amy Ryan, the two-tiered story is primarily driven by Hanks and Mark Rylance. The film begins with an excellent, wordless sequence following Rudolf Abel (Rylance) and the men trailing him. Spielberg and his regulars, cinematographer Janusz Kaminski and editor Michael Kahn, craft a thrilling sequence. As the camera moves through the crowd, the audience alternates between being the pursued and the pursuer. The scene is rife with visual information and clever touches, culminating in Abel’s arrest at his apartment. He is charged with being a spy for Russia – a charge Russia is quick to deny.

Abel is the perfect spy. Unlike James Bond, he’s completely inconspicuous. He looks like a very nice older man shuffling his way through the later years of his life. You probably wouldn’t pay him any mind had you passed him on a crowded New York street. Rylance gives Abel the right amount of stoicism and wit; his biggest piece of cinematic espionage is the subtle way he stakes claim to the film’s best performance. Rather than wrestle with the audience’s built-in regard for Hanks as a hero, Rylance instead opts for a hint of mystery to draw us in. He plays to the audience’s curiosity about his innocence and intent, and Hanks pokes around for the answers we seek. Their pas de deux is a satisfying ballet between two great actors whose mutual respect bleeds into the friendship their characters develop.

Donovan is called upon by his boss Thomas Watters (Alda) to defend Abel in what is expected to be an open and shut case. The move is questioned by Donovan, who explains he hasn’t done that type of law in ages. Watters responds that it must appear that Abel gets a fair trial, even if the current Cold War climate fills the American public with panic over nuclear war and communism. (There’s even an appearance by the famous and useless “Duck and Cover” short.) Abel is guilty in not only the public’s eye but the court’s and the government’s as well. Of his defense of a very unpopular man, Donovan tells Watters, “the public will hate me, but at least I’ll lose.”

Donovan underestimates the level of public animosity, especially when his impressive defense saves Abel from the death penalty. His family is threatened, but he remains adamant that Abel will make a good bargaining chip. Donovan gets the chance to prove that when the spy plane of Francis Gary Powers (Austin Stowell) is shot down. Powers is convicted of espionage, and the CIA wants to exchange him for Abel before any information is extracted from Powers. Donovan is entrusted with the negotiations, which turn complicated when an American grad student, Frederick Pryor (Will Rogers) is arrested in East Berlin. Donovan wants to save Pryor and Powers in a 2-for-1 shot, but the CIA doesn’t care and neither the Germans nor the Russians are willing to get the lesser end of the deal. Donovan digs in his heels, stubbornly defying his bosses while jeopardizing the mission.

Like all great spy stories, Bridge of Spies gets maximum mileage from process rather than action. It knows that a life of spying is more like chess than Battleship, and Spielberg wrings unbearable suspense from each strategic move. The technical details are first-rate, even if the score by Thomas Newman overdoes it at times. The actors impressively commit to the story, no matter how small the role (as Mrs. Donovan, Ryan manages to spin gold out of an underwritten part). The screenplay never tips its hand, opting to leave the audience in the dark about some of the details, and allowing us to figure out others on our own.

This is a fine telling of a little-known story, and if nothing else, it should bring veteran actor Mark Rylance the American recognition he deserves. Hanks’ fourth film with his director (and second with the Coens) is the best of his Spielberg pictures. Folks will go to Bridge of Spies for Hanks, but will stumble out stunned by Rylance.