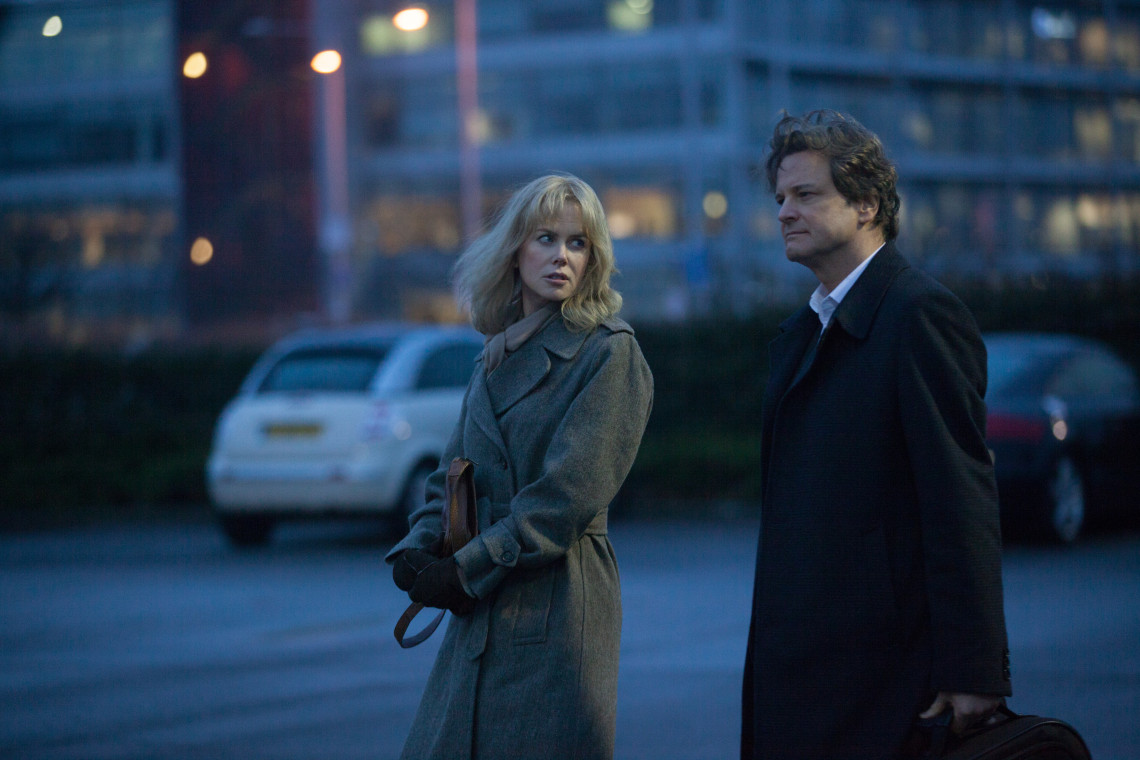 “Before I Go to Sleep”

There’s a resigned manner in the way Before I Go to Sleep plays out. Running a trim 92 minutes and with a credited cast of just nine actors plus stunt people, it’s a small, rote mystery about a woman with amnesia, Christine Lucas (Nicole Kidman), who sets out to discover the cause of her problem and the truth behind the puzzle of her life. Christine’s default setting isn’t rage or curiosity or even confusion, though, but insecurity: her face cast in a perpetual half-gape of unknowing, she’s hesitant to venture too far or believe too much about anything, preferring for events to run their course around and over her. There are any number of reasons for this passivity, but most telling is that her indecisiveness is mirrored by writer-director Rowan Joffe, who adapted the film from S.J. Watson’s novel. Joffe, throughout, seems compulsively unable to let suspense build through character interaction or intricate situations, which is confounding given that his premise is inherently wired for drama and mystery.

Yet every time Joffe gets close to staging a scene where two characters draw closer together or farther apart based on what they might be hiding from each other, he steps on the action with jump scares, like the camera suddenly whipping up to see a plane soaring low overhead, or the horn of a large truck driving by the protagonist for no reason. There’s probably a charitable way to squint and read these moments as symbols of Christine’s fragility, but that feels like giving Joffe too much credit. The beats and blasts come at regular intervals here, and it eventually becomes apparent that his goal is not to entice the viewer with a mystery but to check off items in a list and be done with it. Woman in peril, check; woman violently assaulted in ways almost guaranteed by their violence to blind us to what their gruesomeness might mean for us as passive viewers of such horrors, check; good guys acting like bad guys and vice versa, check. One interesting late-game twist aside, the entire film is hobbled by insecurity. Like Christine, it lacks a voice, or even an idea of how to find one.

At the start, Christine awakens next to a man she doesn’t recognize (Colin Firth), who reminds her he’s her husband, Ben, and that Christine was in an accident 10 years earlier that left her with anterograde amnesia. She’s unable to form new memories, and whatever she learns or experiences in a day is wiped out overnight as she sleeps. Ben says Christine’s mind still thinks she’s in her early 20s, though in a curious lack of oversight (or just a reluctance to get into it), Joffe never has Christine remember anything: not her life before the accident, not her childhood, not older world events, nothing. She’s a blank slate. Once Ben is at the office, Christine receives a call from a Dr. Nasch (Mark Strong), a doctor who’s been working with her to help restore her memory. He tells her he’s supplied her with a camera for her to record a daily diary so she can get a kind of neurological jump-start on the day by watching what she learned the day before. This tool will let her start to build a story for herself as she explores her past and realizes Ben has been hiding things from her in the name of protecting her.

It’s a tight premise for a modest kind of thriller, but Joffe grows timid almost immediately. For instance, Nasch acts erratically for a doctor, telling Christine he wants to keep their work private from Ben and only meeting with her in abandoned parking lots and offices after-hours. This isn’t a narrative decision, but a manipulative one: Joffe wants us to suspect Nasch right away instead of journeying with Christine as she wonders whether to trust Nasch. Only in cheap thrillers do ostensibly good characters say vague, cryptic, possibly threatening things for no real reason other than stringing viewers along. As a result, the film feels less like a narrative and more like a very thinly cast parlor game: cast your votes as to which of the only two other main characters had something to do with Christine’s accident. You’re bound to pick the right one long before the film’s abbreviated run time expires. Not helping matters is the film’s pedestrian look, relying on abstract extreme close-ups and generic settings, as if it was shot with eventual TV viewing in mind. There’s an underlying sense of thriftiness that underscores the film’s bland identity.

Tasked with carrying the film, Kidman does good work with what she’s been given, and there are moments when Joffe brushes against Christine’s true sadness and desperation that are genuinely affecting. For example, she learns a particularly grim fact about her past and sits stunned by the attendant sorrow that, because of her condition, she will have to relearn this fresh grief every day. For just a moment, Before I Go To Sleep locks in and seems to grow into something more solid. But then its own memory resets, and everything falls apart.