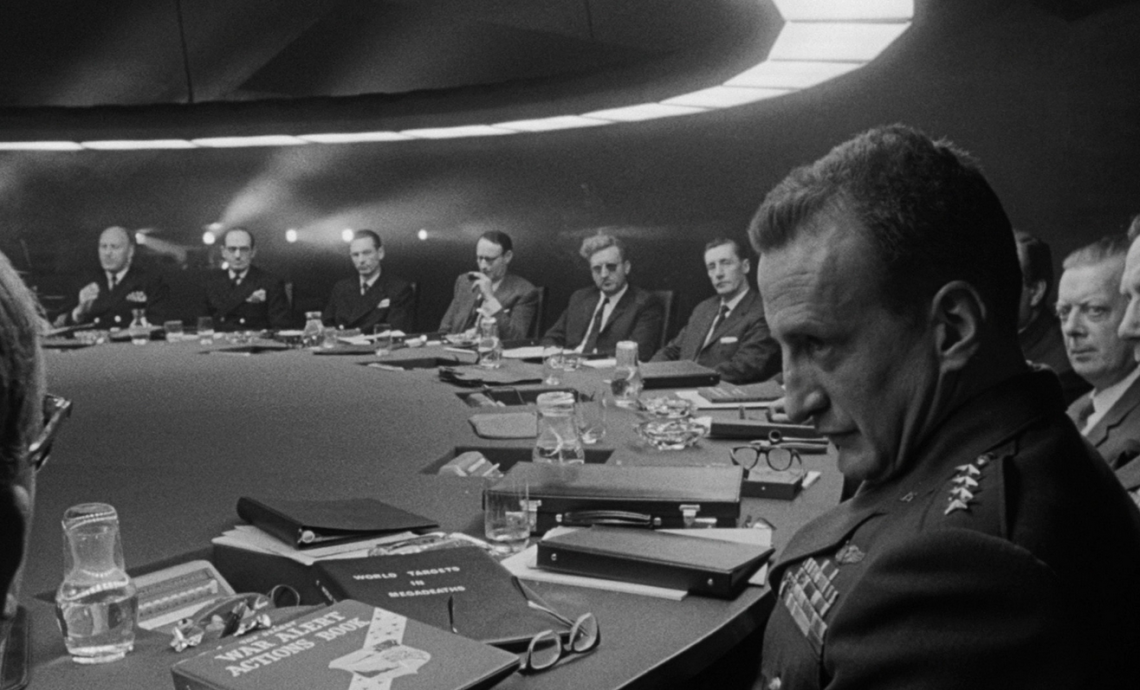 Every other week, Alissa Wilkinson looks back at an iconic piece of cinema in the Adult Beginners column. The twist? She’s watching each of these films for the first time, approaching them with fresh eyes and mature context. This week, she’s discussing Dr. Strangelove or: How I Learned to Stop Worrying and Love the Bomb.

There’s nothing funnier to me than a good political farce, and it’s clear, now that I’ve finally watched Dr. Strangelove or: How I Learned to Stop Worrying and Love the Bomb, that I’d been missing the granddaddy of all political farces all this time.

Farces aren’t merely comedy—they’re comedic dramas, which I take to mean that they’re ludicrous on the surface while dealing with something real underneath. Everything in Dr. Strangelove is off the hook, from Peter Sellers’ three-role appearance (apparently he was slated to do four originally) to the names. The names! General Jack D. Ripper, Captain Lionel Mandrake, General Buck Turgidson, President Merkin Muffley, Alexei de Sadeski, Colonel “Bat” Guano. Burpelson Air Force Base.

Not everybody got that it was a farce, though. Writing about the film on its 50th anniversary last year in the New Yorker, Eric Schlosser noted that a lot of people didn’t get the joke: “[One critic] compared it to Soviet propaganda. Although Strangelove was clearly a farce, with the comedian Peter Sellers playing three roles, it was criticized for being implausible. An expert at the Institute for Strategic Studies called the events in the film ‘impossible on a dozen counts.’” That sort of reception is now common: For any given movie, some expert in astronomy or foreign relations or Martian agriculture is hauled onto the scene to give a lecture on what X gets wrong about Y. But ironically, as Schlosser points out, most everything in the movie turned out to be real after all.

Anyhow, though I’ve seen most of Stanley Kubrick’s films, I was completely unfamiliar with Dr. Strangelove when I fired it up for a group of friends the other night. The characters’ names first clued me into the level of farce—it’s a sex comedy, right? Having grown up steeped in the Old Testament, I instantly recognized “Mandrake” as the name of a plant that Jacob and his wives used to, well, encourage fertility—it’s a root that’s both hallucinatory and narcotic (you might remember mandrakes from Pan’s Labyrinth). Turgidson, Muffley: I think that’s plenty, especially coupled with the obvious phallic imagery of the bomb, the constant talk of Americans’ “precious bodily fluids,” and Turgidson’s sudden uptick in interest in the bunker with a 10-to-1 female-to-male ratio.

It took a while after the film’s initial release for anyone to write about the seemingly obvious sexual imagery of the film. And that basically means that commentators back then were fixated on the movie’s politics, which I suppose says something about when it was made and what was on everyone’s mind. It’s such a skillful farce that the humor slipped below viewers’ radars.

The funniest and most frightening part of its politics is that it’s a nuclear scare started by nothing, by a crazy man running his mouth, and that once it’s started it can’t be stopped. It’s all posturing and poses, a truly international incident where nobody can possibly win. It’s the thing we’re all worried about when we talk about some presidential candidate having the nuclear codes, and it’s the same worry that runs beneath every war we’ve engaged in since the Cold War: What if we all get obliterated for no reason?

The idea that real-life politics are often a farce is pretty much gospel today. Just watch Twitter during the next debate, or tune in to any late-night show. Or do my favorite thing, and fire up In the Loop next time you’re in the mood for a political farce. The genius of Armando Iannucci’s 2009 black political comedy is that it tracks along with what Kubrick’s does so well.

In Iannucci’s film (which includes the most melodic strings of profanities you’ll ever hear, straight from the mouth of Peter Capaldi), it’s not a posturing general who’s at fault, but the hapless Minister for International Development who inadvertently starts a war by saying that war in the Middle East is “unforeseeable.” From there, things escalate quickly. But everything in the film happens not so much because of principle or policy but because of egos—national egos (London and Washington alike), old grudges, old sexual pairings, new enmities, general misanthropy. Dr. Strangelove’s sexual imagery is more metaphorical, while In the Loop is more explicit, but both hang the true source of the escalation on interpersonal politics more than anything about, say, governance.

I keep going on about the sexual politics for this reason: Sometimes we file people away by their ideologies, assuming we know who they are from their party affiliation. But governance is done by humans, who are vulnerable and stupid and full of themselves, and we’re never more those things than in matters of love and sex. So political farces like Dr. Strangelove and In the Loop are smart to link governing and warmongering to sex as a reminder of how precarious civilization is, and how quickly it can be taken down by someone’s passion or temper.

Besides, surely you can’t help but love a movie in which the president hollers, “Gentlemen! You can’t fight in here! This is the War Room!”