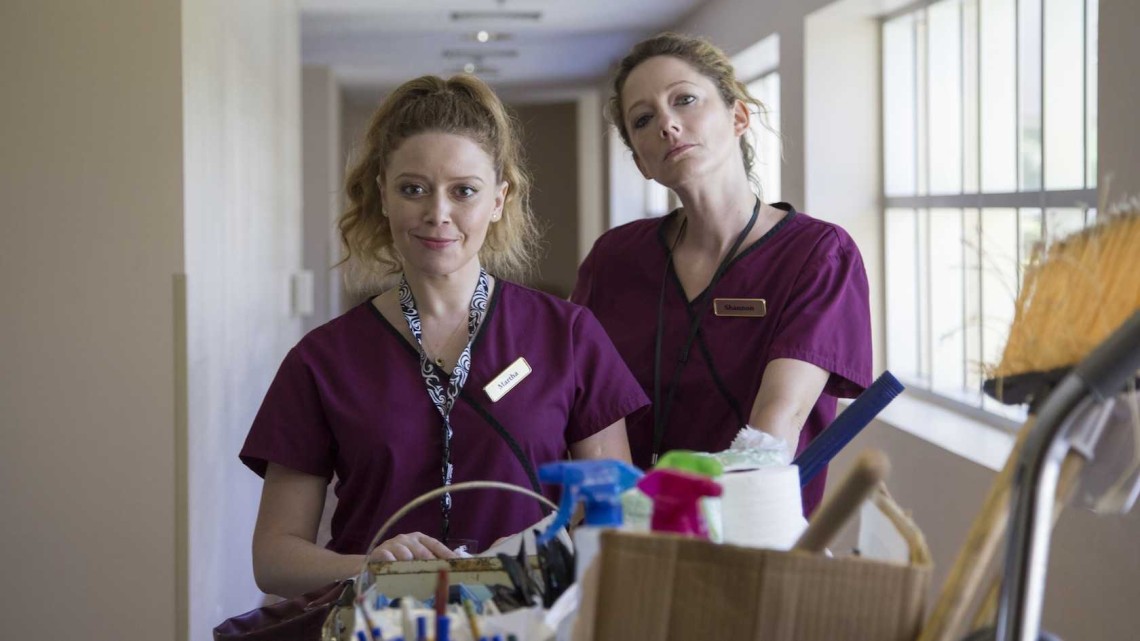 “Addicted to Fresno” Has Surprisingly Little to Say

Nothing about Jamie Babbit’s Addicted to Fresno sounds bad on paper. Babbit has helmed episodes of Girls, Married, and Brooklyn Nine-Nine in her career, while her partner, Karey Dornetto, has penned installments of Portlandia and vintage Arrested Development; the cast, meanwhile, features Judy Greer and Natasha Lyonne in leading roles while the great, criminally underrated Malcolm Barrett, plus Ron Livingston and Aubrey Plaza, fill out the margins as supporting players. Sounds like a recipe for uncomfortable hilarity.

But the television background of Addicted to Fresno’s architects show. Yes, fine, we’re in a “golden age” for TV, and by consequence, our ideas of what TV can do are expanding. Addicted to Fresno fits into a much smaller box than any of the series that Babbit and Dornetto have their names on, though; in fact, the whole film feels like half a season of television shoddily edited to fit into an 80-minute movie. You get the sense that Babbit and Dornetto had more story that they wanted to tell, but found themselves tight on space for their jokes, characters, and narrative to properly breathe. Movies rarely need to be made shorter. Addicted to Fresno effortlessly proves that most of them could stand to be longer.

Greer plays Shannon, a begrudgingly recovering sex addict. Lyonne plays Martha, Shannon’s determinedly sweet, long-suffering sister. Martha, eager to help Shannon get back on her feet, finagles a job opportunity for her sister: maid service at the hotel where Martha works. Shannon, of course, is less than pleased at her circumstances, and tries to find reprieve in her steamy affair with her doctor, Edwin (Livingston). But Shannon’s libido leads her and Martha into calamity when Martha walks in on Shannon screwing Boris (Jon Daly), a skeevy guest staying at the hotel. Shannon claims rape. Martha tries to help. They all struggle, Boris winds up dead, and suddenly the girls have a major corpse-disposal problem.

The rest of the movie concerns their efforts to dispose of poor Boris’s body quietly and quickly, but all that really matters is the set-up. Movies like Addicted to Fresno play in a vulgar sandbox where anything goes and where propriety is less important than the pursuit of a great punchline; if at any point you’re not offended, there’s likely something more wrong with you than there is with the movie itself. Addicted to Fresno doesn’t let us down as a work of provocation, but its basic conceit toes the ugliness line with appalling dismissiveness. Look, we get it: Boris is the dictionary definition of “gross.” He’s a mullet-sporting, catcalling perv. But the movie practically invites our sympathy for him and our disgust for Shannon, who, frankly, is unlikeable enough without needing an accidental murder hanging over her head, too.

Addicted to Fresno stays caught in the gravitational pull of her dishonesty, and that sours the already astringent viewing experience. It’s an issue of perspective. There’s never a point in the film where Shannon reflects in any meaningful way on essentially leading an innocent man to his demise. She doesn’t really think about it. Babbit doesn’t, either, but the hand she and Dornetto deal this otherwise irrelevant character is jaw-dropping. Getting past Boris shuffling off his mortal coil and enjoying what meager pleasures Addicted to Fresno has to offer is almost impossible, and calling out the film’s callousness almost feels like a social faux pas. Such is the infectious power of its indifference: We’re persuaded into not caring when we likely should, not just about Boris, but about the nature of Shannon’s falsity, which is every bit as bad as icing a person and lying about it.

Social politics and morality aside, Addicted to Fresno has little to say about its subjects or its themes, and aside from a few clutch one-liners and performances from Greer, Lyonne, and Barrett, there’s little here to offset the plot’s repugnance. (The film, in fairness, deserves praise for hiring Edward Barbanell to play Shannon’s and Martha’s boss, a cheerful man with Down syndrome, and treating him with real dignity and warmth.) Greer and Lyonne gel beautifully together, which is probably more important for Greer than for Lyonne; 2015 hasn’t exactly been Greer’s year, no matter what her IMDb sheet tells you at a glance. In two of the summer’s top 10 highest-grossing flicks, Jurassic World and Ant-Man, Greer was shoe-horned into inconsequential mother roles that don’t make use of her wicked sense of humor or penchant for making mania alluring. (At least she has Grandma.) But whatever connection they make with each other is marred by Addicted to Fresno’s polluted ethics. No topic should be off limits to comedy, but maybe they should be off limits to certain individuals.