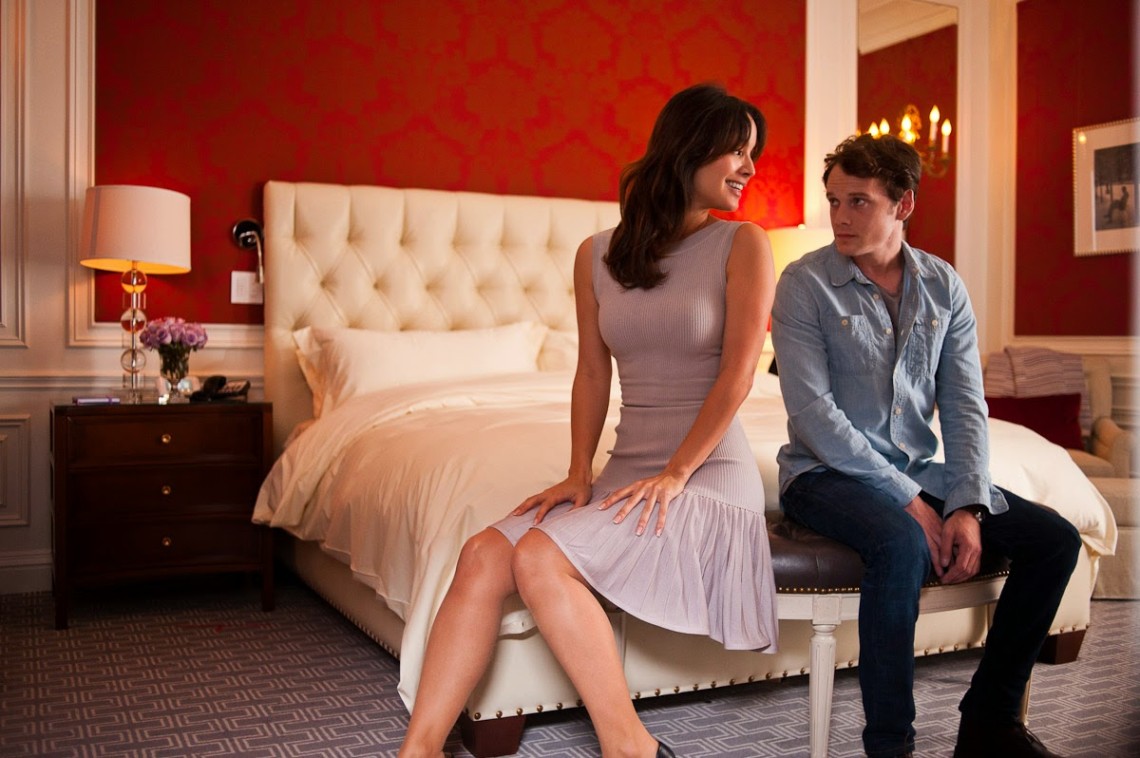 Nascent filmmakers sometimes fall into the trap of attempting to emulate the singular styles of Terrence Malick or Quentin Tarantino with diminishing returns. But it’s Woody Allen’s influence on film that has wrought irrevocable damage to the limited imaginations of budding writer-directors who crave to duplicate the native New Yorker’s nonpareil magic. In the wake of Annie Hall and Manhattan, New York narratives are seldom just about its sprawling qualities and very diverse population. Now they frequently tell of artists who speak in prattling voiceovers, and feature long shots of chatty people crossing through a wide shot. And of course, they bemoan the irresistible sustenance of romantic entanglement (or, in Allen shorthand, “the eggs”). While there are plenty of stories to tell, even in the same city, 5 to 7 is another superficial Woody wannabe movie—albeit one that fails to expand upon its inspirations by shaking up the expected aesthetics. Instead, it’s a bland salute wrapped within a tepid plot that also owes itself to Mike Nichols’ The Graduate.

5 to 7 does initially offer a unique story angle, but it is written by someone who must have perceived The Graduate as a straightforward May-December romance. The “Benjamin” of this situation is Brian (Anton Yelchin), a 25-year-old New Yorker who falls for a “Mrs. Robinson” that’s nearly a decade his senior, Arielle (Bérénice Marlohe). Because of her marriage and two children, she wants their relationship to honor the title concept, “cinq à sept”—a reference to the time of day in which French men would see their mistresses after work. Her husband, Valery (Lambert Wilson), does the same thing too, with a younger woman named Jane (Olivia Thirlby). Although originally hesitant to Arielle’s unusual terms, Brian begins a relationship with Arielle and as he gets very close to her, Arielle becomes the “Elaine Robinson,” and she begins to flee his sporadic grasp.

First-time director Victor Levin calls attention to his Allen-esque attributes by introducing Brian as the inverse of a Woody proxy. Yelchin name-drops The Little Mermaid when trying to charm Arielle about interesting characters, and he’s lost when he steps into an art museum. There’s no low art and high art clash in Brian’s convenient endearment to Arielle; it’s all low art for him. That is, until it surfaces that Brian is an aspiring novelist, which has the effect of salt in a wound for the audience. Levin’s script endeavors through this reckless delusion, from the mailed rejection letters that cover Brian’s wall (do publishers not use email?) to a straight-faced declaration of Brian’s unproven brilliance. Other films have the conceit of casting handsome leads, sometimes with laughably shiny physiques; but effete movies like 5 to 7 make their characters romantic underdogs who happen to be unequivocally “bright” writers.

Sans spectacles until the very end, but always in the same blazers and button-downs as Allen’s Isaac and Alvy, Yelchin’s performance is lazy as the script, taking on this rigid archetype without any je ne sais quoi. Although he has been sturdier and better cast in other films (such as Drake Doremus’ 2011 Like Crazy), flying-hands neuroses do no good for him here. Weak characterization is a common epidemic in this watered-down version of New York, but 5 to 7 reaches its low point when it pits Yelchin and Thirlby together for cringe-worthy conversations, which play out with stiff, amateur line-reading.

It’s cinematically that Levin aims to distinguish himself from Woody Allen, and cover up the debt it obviously owes to The Graduate’s plot. The camerawork by Arnaud Poiter has a periodic yet welcome delicacy, opting for darker shadows and pleasant frame movement. The strings that sometimes accompany the romance of 5 to 7 are agreeable, too, but would fit better in a Downton Abbey downer moment rather than overflowing the sap within an already disingenuous movie like this. As a storyteller, Levin’s slogging script understands the style of his influences but not the technique that has made them great. Hardly looking outside of the standards of Allen-imitation-style, Levin resorts to a one-dimensional grasp that makes it impossible for 5 to 7 to resonate autonomously.