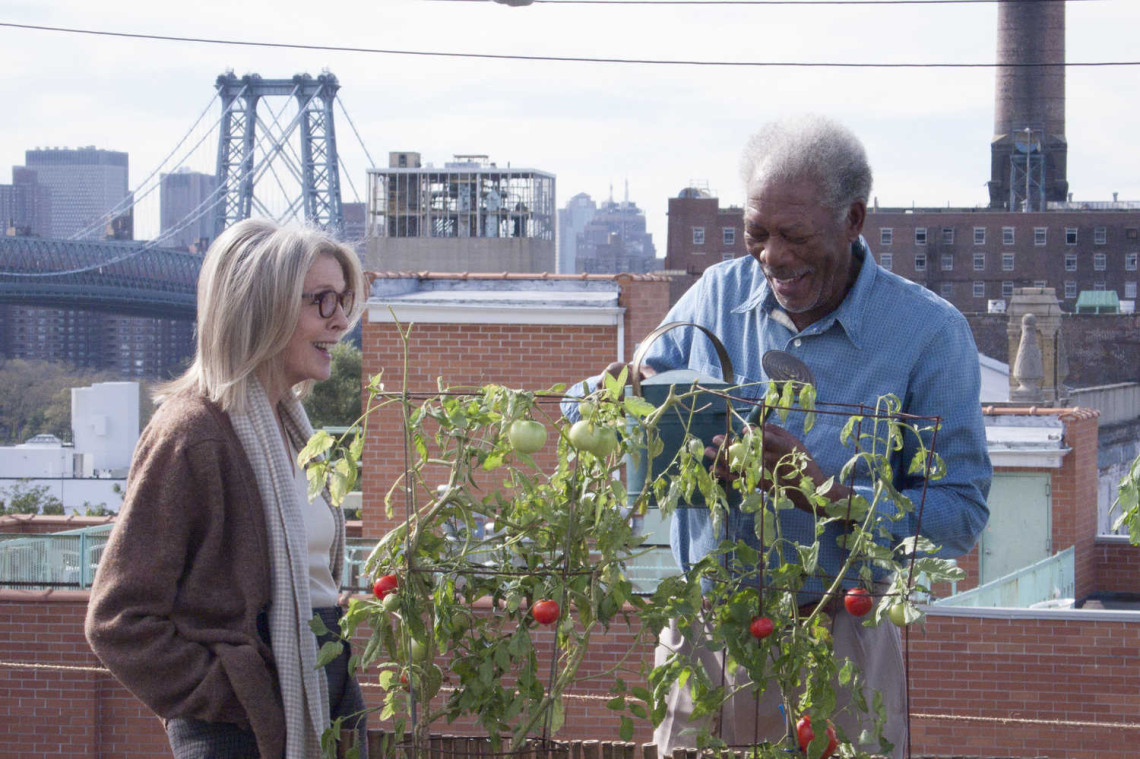 Modest in ambition and charm, 5 Flights Up, a deftly played two-hander starring Morgan Freeman and Diane Keaton, feels a lot like a Hallmark Channel movie that just so happened to land a couple of cinema legends in leading roles. But movie-star charisma goes a long way, as evidenced by the film’s opening moments, when we see these two wonderful performers settled into the comfy comic rhythms of an old married couple who have been together for so long they practically complete each other’s sentences.

Alex is a painter, Ruth’s a retired schoolteacher, and boy, has their Brooklyn neighborhood changed over these past 40 years. After learning they might be able to land upwards of a million dollars for their cozy fifth-floor Williamsburg walk-up, the two attempt to sell it with the help of Ruth’s high-strung realtor niece (Cynthia Nixon, giving a performance considerably less at ease then her co-stars). After all, Ruth and Alex aren’t going to be able to climb those stairs forever.

Set over a chaotic weekend of New York real-estate marketing maneuvers that will only seem cartoonish to those unfamiliar with the actual insanity that goes on in that city, 5 Flights Up occasionally pauses for tender moments and offers hints of being about much more than the film actually is. It really shouldn’t be such a novelty to see a movie about two senior citizens that doesn’t portray them as clumsy, sex-crazed curmudgeons for cheap laughs, but here we are.

Freeman and Keaton have beautiful chemistry, with his folksy, seen-it-all gravitas balancing out her dizzy neuroses as they beam at each other adoringly. At least for a little while, it looks as if 5 Flights Up is going to confront issues of aging that are dealt with every day by moviegoers but seldom seen onscreen. There comes a time when we all have to move on and secure a future, even if that means saying goodbye to a place you dearly love.

Sadly, the movie instead cops out, tables all these concerns and positions Ruth and Alex as the last soulful bohemians in Brooklyn, taking a heroic stand against one-dimensional, gentrifying villains and their awful cellphones. Nixon’s brittle realtor bears the brunt of it in an exceedingly uncharitable portrayal, eventually sputtering obscenities on a street corner for the audience’s easy derision.

Director Richard Loncraine cut his teeth on edgy big-screen theater adaptations like Dennis Potter’s Brimstone & Treacle (1982) and Ian McKellen’s 1930s-set take on Richard III (1995). Here, though, he downshifts into agreeably gooey sentimentality, swaddled in burnished cinematography and cozy music cues. 5 Flights Up is not an unpleasant film – watching Freeman and Keaton is too much of a treat – but it is a false one that was tantalizingly close to being true.