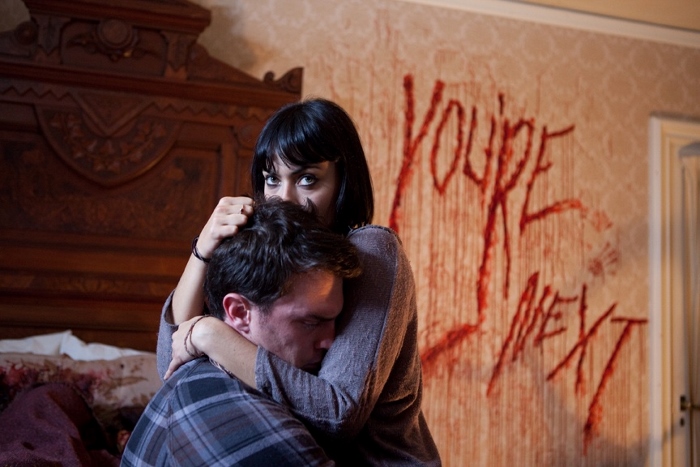 Adam Wingard’s ‘You’re Next’ is Hysterical, Brutal, and Tons of Fun

Republished and altered from our LA Film Festival coverage.

When I saw You’re Next at the LA Film Festival, director Adam Wingard and writer Simon Barrett introduced the film to the crowded theater by saying up front “We made this movie with the purpose of not making you feel like a horrible person when it ends. We want people to have fun with it. We made it entirely with the audience in mind.”

If that was the ultimate goal of this home-invasion thriller, then mission accomplished. You’re Next might be one of the most audience-gratifying horror films I’ve seen in quite a long time, rewarding the viewers as much as it likes to screw with them. There’re a few twists and turns in the story, but the focus remains on delivering its visceral thrills and gallows humor with precision and skill. It gives horror nerds exactly what they want, then offers something more for non-fans to latch onto. After hearing the hype for this film from various festivals since all the way back in 2011, it’s nice to find that You’re Next is both as good and as fun as it’s been talked up to be.

The twists are all fun and spice up the formula a great deal, but those expecting the film to be a Scream or Cabin in the Woods-level meta-commentary should shift their anticipation. There’s really no genre-shifting, trope-subverting tactics going on in the story, or even so much as a profound thematic undercurrent. Rather, You’re Next is simply a skilled exercise in the tropes, reinvigorating the cliches to make them fun again. That being said, there are some subversions in the way the story is set-up, as we learn why it is that this family is being targeted and characters continually reveal their true colors. These twists on audience expectations feel more experimental than meaningful, which actually works to the film’s benefit, giving it a very freeing, anything-goes kind of vibe, often reminding me in some ways of Michael Haneke’s Funny Games, even though it’s operating on an entirely different wavelength. 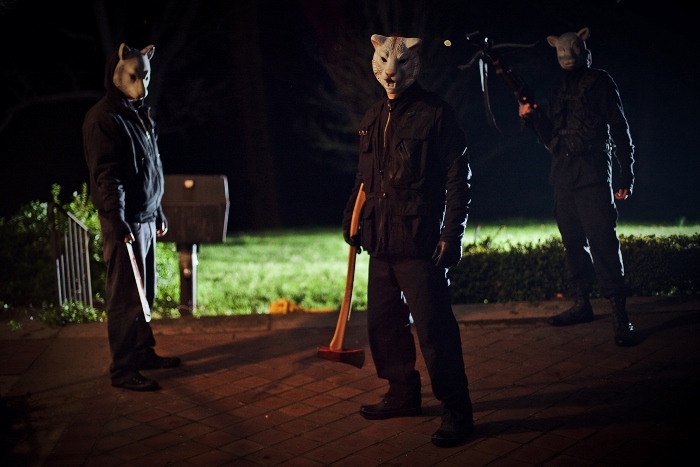 That being said, the twists that make this film as unique as it is are also what make the movie hard to really explain or critique on a plot level. All I’ll really say is that people who are constantly annoyed by horror protagonists who can’t aptly defend themselves or approach horrifying situations in a logical and empowering manner will get a kick out of You’re Next. Our lead female Erin (Sharni Vinson) is so remarkably capable that she skirts the line between scream-queen and straight-up action heroine. She’s prepared for every situation, always thinks ahead, does the smartest move 90% of the time (hey, it wouldn’t be a horror movie without a few dumb decisions), and is able to hold her own against the already powerful intruders.

This kind of character should’ve been problematic for this kind of movie (a small part of me was thinking “Oh, come ON!” when she happened to predict certain enemy moves), but perfect casting goes a long way and Sharni Vinson completely dominates the role and the screen, able to both sell her badassery and then perform a more impossible feat: making it all believable. This is a woman who is naturally badass, exuding strength because it is simply a part of her rather than someone who has to be empowered by external means. I could see Vinson becoming either a new horror film sensation or an action-star breakout, and I’d be immensely happy with either choice.

You’re Next often walks the tightrope between humor and chills, but there are a few moments when it stumbles in that line-straddling. There’re times when the humor got in the way of the scares and brutality got in the way of the laughs. There were even a few choice scenes in which my LAFF audience guffawed during a scene that would be flat-out horrifying in almost any other film. That being said, the sequences that blunder fall short in comparison to the near-euphoric scenes in which the humor perfectly complements the horror and vice versa. Perfectly timed one-liners, some excellent visual gags, and a solid array of supporting performances from the strange cast of other indie and mumblecore filmmakers (Joe Swanberg and Ti West both appear as members of the family) make the humor work most of the time. I dare not spoil the best gags, but there are some creative means of murdering people in this film that reach Looney Tunes levels of cartoonishness.