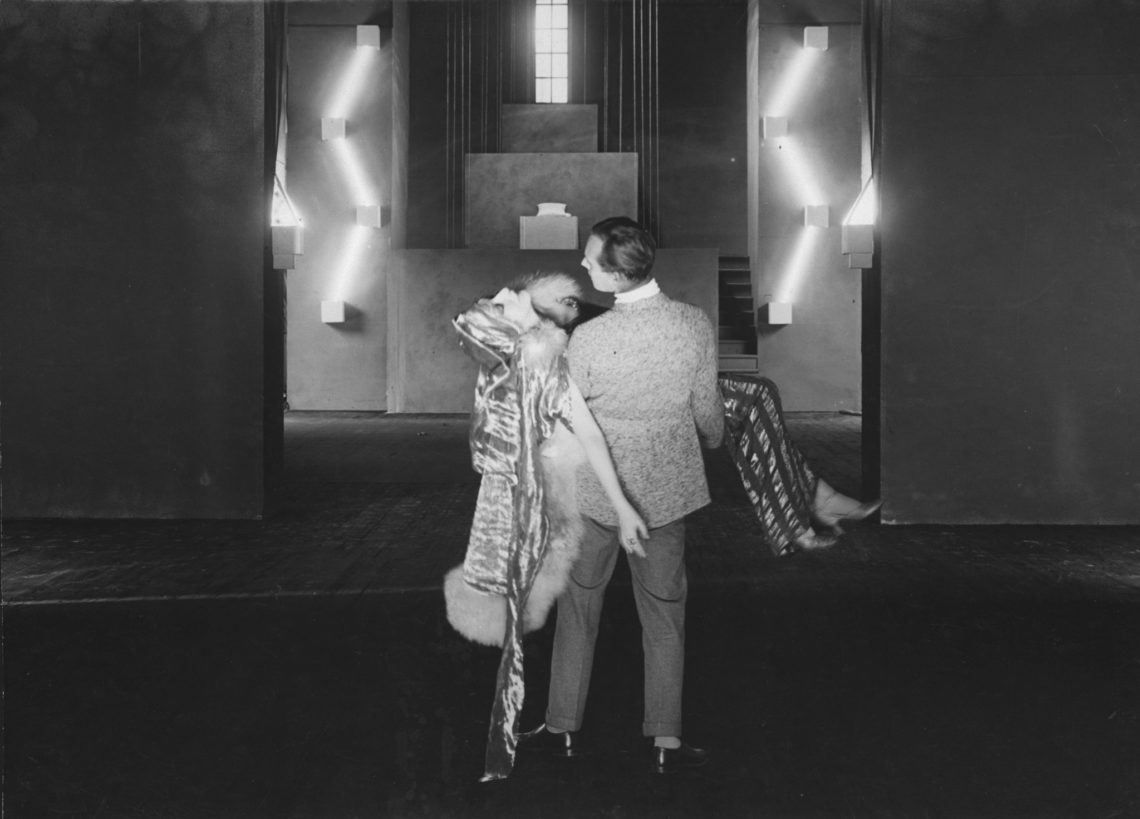 This Week on MUBI: “L’Inhumaine”

In this week's column, Jake Cole looks at the influential 1924 science-fiction film "L'Inhumaine."

L’Inhumaine (1924) is less a film than a portable exhibition, a collection of formal innovations across several artistic disciplines bound by a plot developed just enough to support the weight of its technique. Its opening shots of a camera peering out of a train window down to a city below the tracks has a documentary quality immediately thrown to the wayside when the action moves to the home of the singer Claire Lescot (Georgette Leblanc). From there, the film becomes a repository for architects, set and costume designers, painters, and more to show off their skills for Marcel L’Herbier, who attempts to synthesize them with the latest filmmaking breakthroughs.

Claire’s house first appears in miniature, flattened against the background of a shot of cars arriving to the home for one of her many soirées. Rendered two-dimensional, the house only looks stranger, no meat feat given the cold, modern design of the building. Large and blocky, with clusters of windows on the upper and lower levels, the building looks more like a factory than a domicile. Inside, the home is even more forbidding: pyramidal staircases descend at opposite ends of the foyer, overlooking a u-shaped dinner table on a warped chessboard pattern floor, surrounded by a moat. There is a demented regality to the setting, with the opulence of the interior and the shape of the table calling all attention to the unwed head of the household. It’s hard to tell whether Claire herself projects an animal magnetism that lures men to her side or whether the intricately egomaniacal design of her living quarters subconsciously imparts authority onto her.

Either way, Claire has the desired effect on men, and her parties are colossal affairs of group courtship in which everyone from industrialists to athletes arrive to hobnob and play for her affections. Claire herself, however, is every bit as cold and imperious as her home; Leblanc’s performance is one of tossed-off smiles filled with razor teeth and transparent indifference to the frenzied lust of the men around her. To Claire, there is no difference between her suitors and her servants, whom she forces to wear eerie masks with literally painted on smiles, preventing speech and creating the constant sense of contented obedience.

Claire’s attitude has the tendency to drive some of her suitors mad, none more so than Einar Norsen (Jaque Catelain), a Swedish scientist who is completely in love with the tyrannical bachelorette. Arriving late to the party to find he was not even slightly missed, Einar becomes more and more restless as his romantic memories of going out on the streets of Paris with Claire clash with the sight of her leading on so many men like him. Shots from Einar’s point of view use cloudy filters to communicate his mounting stress via blurred vision, and when he can finally take no more, the scientist drives away, the trees lining the country line warping and undulating as he loses himself to jealousy and pain. Frenzied cutting between a frazzled Einar on the road and Claire back at her house laughing with her guests eventually blurs objective markers of each location into a projection of Einar’s sadness, making the shots of Claire feel like his tormenting imagination.

After Einar loses it and sends his car over the side of a hill, the film briefly sets aside some of its more stylistic flourishes to settle into a perfunctory arc of moral punishment for Claire. Suddenly shunned by high society, Claire is overwhelmed at a concert by a chorus catcalls and boos, which L’Herbier communicates through some simple superimpositions to visually reflect the sonic properties of the crowd’s mass rejection. Elsewhere, though, the film settles into perfunctory silent displays of remorse, with the wild backdrops replaced by plainer settings. Only when Claire is forced to visit Einar’s body. When she first enters the room, a shot/reverse pattern of images seems place to place her dead suitor far away, as if both figures are placed in a vast chamber. But then, one shot of Einar pans over to Claire in an unbroken take and reveals how close they actually are. It’s a deft piece of manipulation that shows how clever the director can be even when stripping away some of his excess.

The final act is all over the place. An extended period of atonement drags the film out with repetitive scenes of Claire’s newfound sense of moral obligation that lack any of the creative spark of the opening stretch. This plot only works when L’Herbier is using it as an excuse to experiment, but the second his technique reverts back to standard, the thinness of Claire’s meaningless emotional arc is all the more apparent, Happily, the climax, in which Claire must be revived after a jealous lover uses a snake to poison her, reclaims some of the film’s earlier drive. Daring fluctuations in lighting add energy to shots of Einar’s laboratory in action to save the woman, and jagged editing lends added intensity to the workers’ frantic labor. The set itself is not as complex as Claire’s home, but L’Herbier eschews some of his collaborators’ dazzling displays with clever in-camera work of his own. By the end, a melodramatic but largely standard tale of a dishonest woman’s rehabilitation is given the feel of an epic by this frenetic sequence.

If you’re interesting in watching L’Inhumaine on MUBI, use your Movie Mezzanine coupon for an exclusive discount and access to a breathtaking library of cinema! Note: MUBI now offers its streaming service to North American users via a Playstation 4 app. Visit the Playstation Store to download for free.