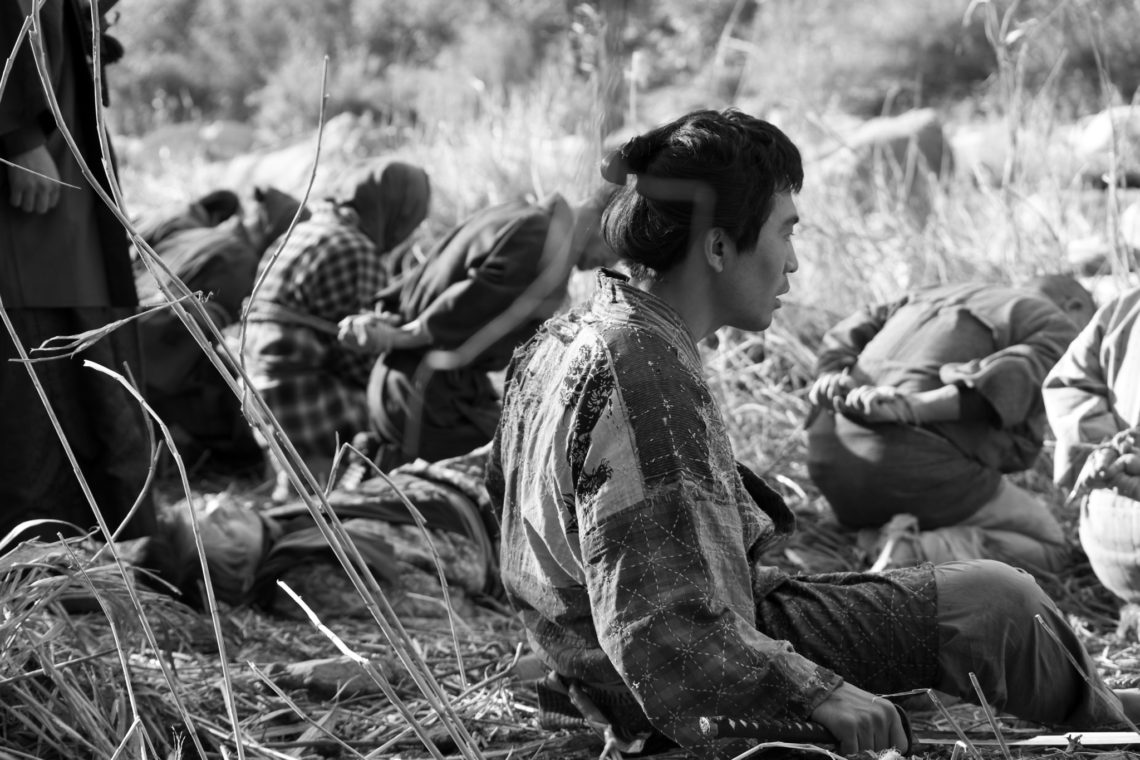 This Week on MUBI: “Sanchu Uprising: Voices at Dawn”

Juchiro Yamasaki’s sophomore film, Sanchu Uprising: Voices at Dawn, is a throwback to the radical Japanese filmmaking of the mid- to late-‘60s. Its direct political address and wild formalism continues the style of Art Theatre Guild mainstays like Nagisa Oshima, while the extremely high-contrast black-and-white cinematography recalls the outré work of Yoshishige Yoshida. The first shot alone announces a strange approach to the classic jidaigeki period drama, unfurling over pitch-black as the agonizing creak of a wooden mill wheel slowly builds in the soundtrack. At last, the image fades up just enough to barely distinguish the spokes of the wheel turning.

This shot disorients with its abstract quality, but it also foregrounds a physicality that defines much of the picture. Yamasaki shoots the movie in a kind of arch verité, a contradictory style attuned to intimate moments but nonetheless filmed with extreme aestheticization. Charting the mounting tensions between overtaxed peasants and uncaring officials that led to a 1726 rebellion, the film always seems to take place in winter, after farming harvests have been completed and the majority of the yields have been seized by the daimyo. The direction of the early scenes is mostly static, and the slow movement of objects within the frame connotes a sluggishness born of hunger. Even the frequent dips into deep shadow suggest that the environment itself has slowed to a crawl to conserve energy.

Despite the mounting grumbles from peasants over the outrage of having their crops seized and being forced to forage for their own food, the film’s protagonist is timid and non-confrontational. Jihei (Naohisa Tanaka) is a humble farmer who seems to get along with everyone he knows in the Sanchu province. He cares less for the political turmoil growing among his peers than he does going home to his wife, Tami (Kano Kajiwara), who is pregnant with their first child. Shots of the pair are gentle and loving, as in a moment where Jihei returns home to find Tami asleep and promptly gets an ear down to her belly, hoping to hear the baby kicking. He feels the loss of food as acutely as anyone else, but he is so easy-going that even his politically active in-laws mildly resent him for his childlike lack of conviction.

Naturally, Jihei gets shanghaied into representing the village, and he takes to the job with extreme reluctance, preferring to let others do the talking, and everything else. Centering the action on the least active member of the growing union of farmers and woodworkers who take their grievances to the prefecture is standard drama, but it also allows the director to keep focus, initially at least, on the daily rota of those suffering under the system. We can watch Jihei as he struggles to put himself forward and risk what little he has to stand with his peers, but equally can one see the ways that Jihei’s brother-in-law, a master martial artist and skilled speaker, attempts to embody a noble upbringing in a peasant’s body to impress officials, or how the labor movement’s leaders shrewdly gather their numbers. For all the style of the first section, it never loses sight of the subtle ways that each person contributes to the struggle.

The director captures with equal grace the efforts of the tax collectors and lords to forestall this gathering threat to authority. Excessively darkened scenes inside of gathering rooms show officials plying representatives with bribes, and also insinuating threats. In one particularly sinister scene, the laborers seem to score a significant victory, getting five of their six demands met. But when it is revealed that the one unanswered demand singles out woodworkers for extra taxation, it becomes clear that the government only gave in to the other items to sow dissent, to make one type of laborer feel unfairly singled out to produce internecine squabbles within the populist organization.

At its best, the film regularly defies expectations for the hidebound jidaigeki drama. The epic sweep of the genre is visually undermined by the cinematography, which so regularly plunges the frame into such darkness that only objects in the immediate foreground are visible, often restricting the action to a single plane. The focus on tax exploitation and subtle political machinations thwarts the desire to see bloodshed, a move that denies even the accidental catharsis of watching samurai cut down rioting peasants. This circumnavigation of expectation extends to Jihei himself, whom we first meet seven years after the events of the main narrative, at which time he resembles more a ronin than a farmer. Yet when the film arrives at the events that give him the eye patch seen in the future, we see not heroism but elaborate cowardice, reconfiguring the entire story around a personal legacy of shame.

Eventually, though, Yamasaki’s experiments get the better of them, and the final act, which follows the disgraced, hidden Jihei, is a repository of meaningless formal diversions. There’s an animated dream sequence, as well as a coda that abruptly jumps to the present, in color, to show the actors re-enacting the events of the rebellion. Neither of these aesthetic leaps is provocative enough to justify their jarring intrusion of an already daringly shot film, and they only call further attention to how much momentum is lost as the character study gives way to the dead end of Jihei’s embarrassment. But there is one gleaming moment in the last act that matches the expectation-ducking cleverness of the first part of the film: its climax, which trades violence for dance, eschewing the further rending of personal ties in favor of a reunion. It’s perhaps the finest scene of the entire movie, and proof that Yamasaki is a talent to watch.

If you’re interesting in watching Sanchu Uprising: Voices at Dawn on MUBI, use your Movie Mezzanine coupon for an exclusive discount and access to a breathtaking library of cinema! Note: MUBI now offers its streaming service to North American users via a Playstation 4 app. Visit the Playstation Store to download for free.