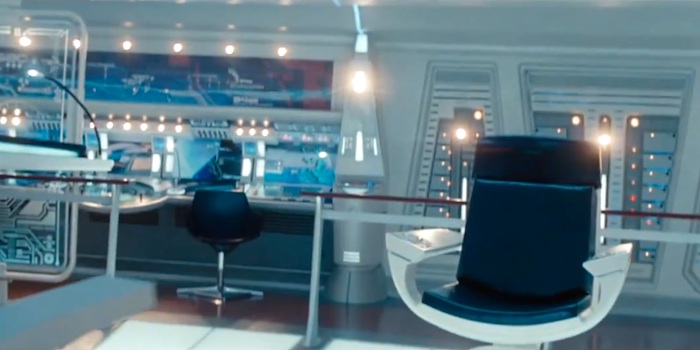 J.J. Abrams’ Star Trek does many things well, but its most unheralded accomplishment is its distinct visual style. Defined by bright, primary colors, canted angles, constantly flowing camerawork and the notorious lens flares, more than any other element of Abrams’ franchise reboot, the visuals are what give it life.

It would perhaps be going too far to say that Abrams’ visual proclivities are the sign of an artful mind at work. His specific visual decisions are often functional—as evidenced by his overuse of medium-shots and close-ups—and often fall on the side of visual distraction from the plot, but the overall feel he creates strengthens the core themes of his approach to the series.

For his iteration of the Star Trek universe, Abrams’ clearly watched the original series and was inspired by the cheap pastel look of the production design. He took that very basic impression and directed that it be updated to reflect modern design aesthetics. What once looked clean and cheap now looks clean and expensive. The interior of the Enterprise provides the signature identifiable look for the films, and what Abrams and his team have done is simply give it a bright white and glass set that allow the colorful, 60’s-inspired uniforms to pop.

What Abrams finds in this modernized, 60’s-inspired design is a vision of the future quite in line with that of Roddenberry’s original conception. It’s the future, but it’s a better future. This isn’t the gritty dourness of Blade Runner, or the paranoid cleanliness of Minority Report. What we’re witnessing is a future where the world truly is a better place, and simplistic as it is, clean designs and bright primary colors reflect this worldview extremely well. For all the awful things that happen in both Star Trek and Stark Trek Into Darkness—planets imploding, people dying—it’s a vision of the future that looks genuinely appealing. It’s a future anyone would want to live in.

The lens flares are perhaps the most identifiable and controversial feature of Abrams’ style. While I cannot argue for the specificity of their use—unlike, for example, the very purposeful flares in Punch-Drunk Love—their effect is more than just a functional aid for verisimilitude. For a long time Abrams has spoken of the lens flares as a means for making the future feel brighter. That may not be totally genuine given their overuse in even his non-Trek films, but it doesn’t matter because they are effective anyway. Much like the primary colors of the sets and costumes, the bright, colorful lens flares feel like splashes of energy bursting through the screen. It’s a lively future, so lively that a mere camera cannot contain the light.

Dutch angles can be awful when overused (see Thor or Les Misérables for examples of terrible canted angles). Star Trek and Into Darkness both rely very heavily on tilting cameras at odd angles, but it’s not just the angles. Shots rush forward and spin around, almost always closing in on or following characters in motion. It’s a busy, bustling future and Abrams’ throws us in there head first. It’s not an artful technique, but it’s effective. Rarely are we left to sit around and consider the implications of the plot, which is no doubt helpful in the moment. It’s a fun, visceral experience through-and-through.

Many would say that this is a blatantly negative feature of Abrams’ filmmaking, and that it’s completely at odds with the spirit of Star Trek. It’s difficult to wholly disagree. Abrams certainly devalues the harder sci-fi elements of his films, even when their plots might actually support more introspection and complexity. That’s not Abrams’ modus oparendi, though. His is a world of developing character through action… lots of action. And, surprisingly, the characters do come through loud and clear, anchoring the films with heart and warmth.

A bright, busy, colorful, action-filled future. That’s the Star Trek of J.J. Abrams. Dan Mindel’s anamorphic cinematography captures it all perfectly. It’s bold, and often beautiful, and best of all it’s completely distinct in this era of blockbuster cinema. No other big budget action movies look as splendidly bubbling with life as Star Trek or Star Trek Into Darkness.