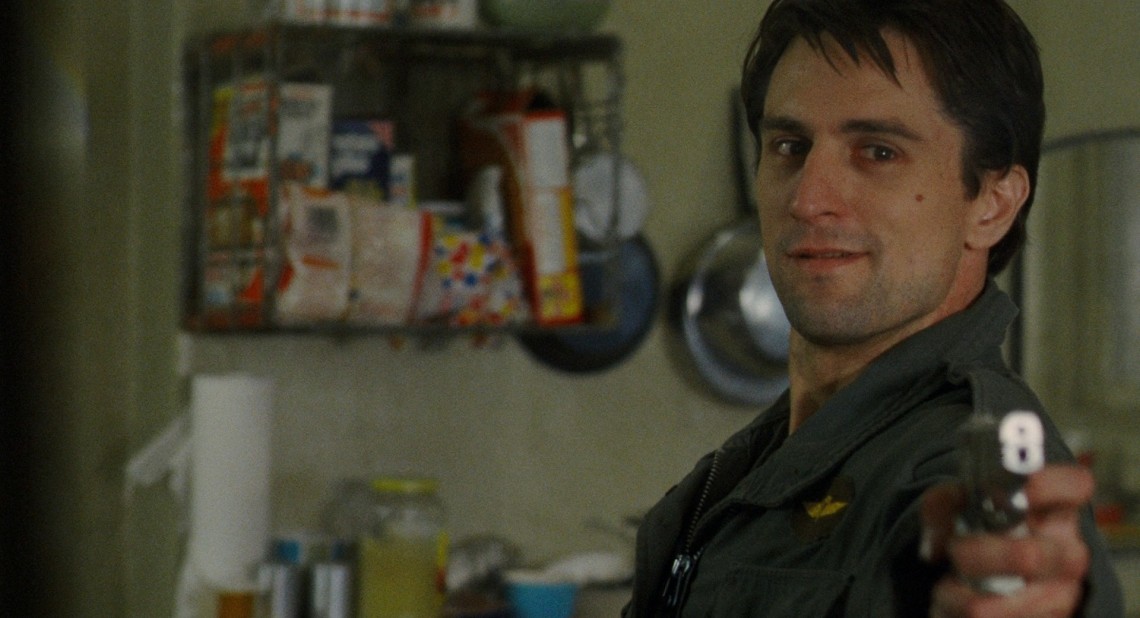 A year before the word was spoken by Obi-Wan Kenobi (Alec Guinness), “force” held Travis Bickle (Robert De Niro) transfixed. More accurately, “true force,” followed by a line about “All the king’s horses and all the king’s men,” incoherent ramblings that don’t amount to anything presentable, but exhibit vividly enough the weather systems of a disturbed mind, the color and temperature of his obsessions, the texture of the imprint he’d care to leave upon the world. “Force” appears on the first page of Paul Schrader’s script, a keyword in his description of Bickle. The Vietnam veteran who takes up driving for vague reasons (“I can’t sleep nights”) is in many ways a fantasy, and very possibly a projection of Schrader’s inner mind or self-image, at least at some point during his early Los Angeles days, when he lived a Bickle-esque life himself. It’s important for Schrader to get these ideas down on paper right off the bat, that Bickle is lonely, hollow-eyed, lean and hungry, smells of sex (“Sick sex, repressed sex, lonely sex, but sex nonetheless”), but is characterized most of all by “force,” the all-purpose, universal adapter of fantasies that speaks to nothing more complicated than our desire to acquire agency in a world of open-air hostility, whether it’s by money, works good or ill, sex, violence, or speech. Bickle’s Hamlet longs only “to be,” and, in the blood-saturated climax, he does. He is.

As it happens, Schrader’s script is one thing on the page, and quite another on the screen. The lion’s share of Schrader’s dark thoughts makes it into the film intact, but around Bickle’s head, Martin Scorsese builds Bickle’s world, a dirty, frustrating, corrupt New York City, but a Scorsese city all the same, not always a Schrader city. And while Taxi Driver had been his most ambitious undertaking to date, Scorsese nevertheless brings the DNA from some of his earlier, smaller movies into the mix. The film benefits from the chatter between Bickle’s fellow drivers, like Wizard and Charlie T., and the banter, well-researched shop talk and complaining in Schrader’s script, dwells on tall tales and absurdities in the final film, as if the knuckleheads from Who’s That Knocking at My Door had invaded.

It’s this quasi-Hawksian milieu that softens the rigid realism Schrader prescribes on the page, and Bickle’s tale, at its core a rather solipsistic yarn about a righteous loner taking on the world from the gutter up, the dream life of a decrepit barfly or a Young Republican, is leavened by a more cautious, more humorous, and more philosophical set of eyes, alive to the doors to invention left open by the script’s far more linear shape. The city on the page has grit and documentary detail, not to mention a splash of lefty New York theater, heir to the legacies of Kazan and Brando, but a process of innovation and improvisation during production gives the city of Taxi Driver a life of its own, the kind of environment that inspires in us the urge to recite the old chestnut, “Only in this fuckin’ city.” 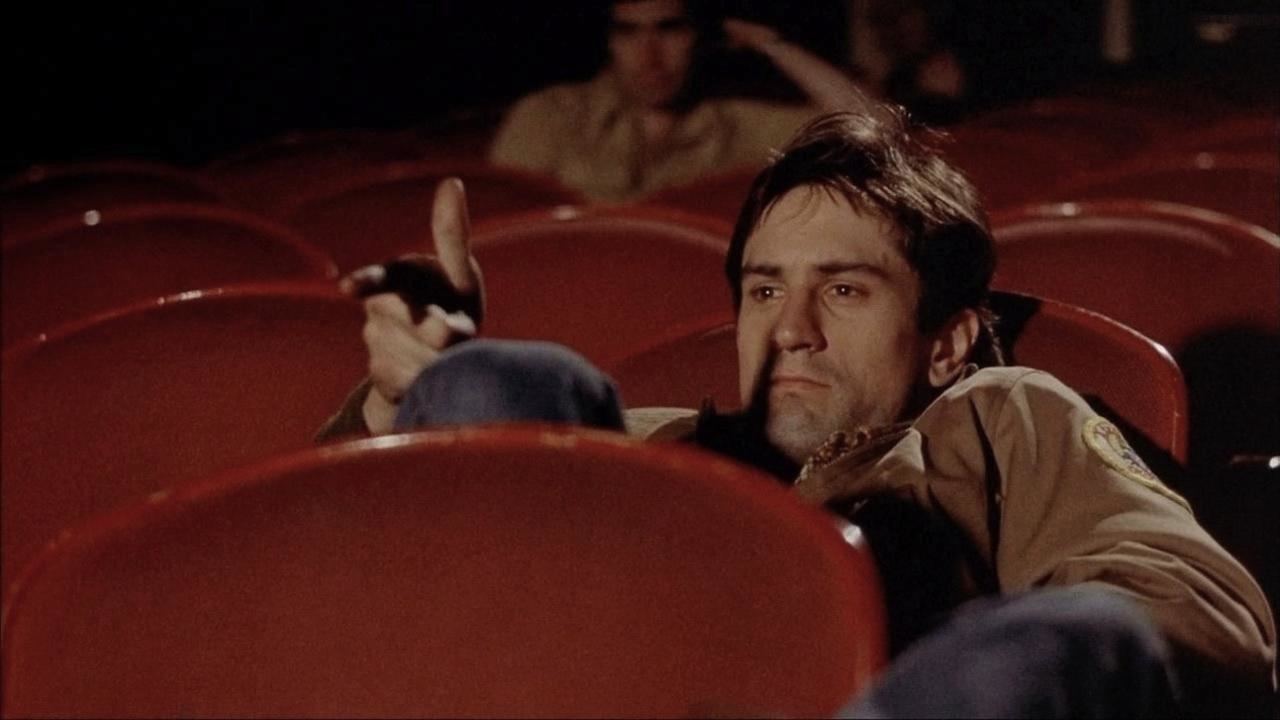 It’s this divide between what’s inside Bickle’s head and what’s outside of it that gives the movie much of its substance—its conversation with itself. While it’s hard to argue that Taxi Driver is some kind of ensemble piece, given the dominance of Bickle’s voice and temperament, the film will often turn to face him from an outsider’s perspective, or remind us of ours. There’s another, more subtle oscillation: at unpredictable moments, Taxi Driver will allow its realist mode to draw back a bit to accommodate the woozy, uncertain perceptions of a troubled insomniac, or, instead, will ramp up its realist mode to return Bickle to his original proportions. Bickle’s brazen confidence when he first asks Betsy out on a date seems to have been brushed away like cobwebs when he interacts with Iris; the stone burden of underage sex work finally, perhaps, too grave a notion to be treated with any other eyesight than 20/20.

It’s in these moments of clarity that Taxi Driver discloses which matters most to its tormented soul: if Bickle cannot possess the angel of light (Betsy), he can at the very least dispatch himself on a crusade to rescue an alternate symbol of purity (a child) from the darkness. By now widely acknowledged to draw considerable influence from John Ford’s The Searchers (revered by Schrader and Scorsese alike), the film shows Bickle’s journey taking on an arc of a decidedly different trajectory than that of Ethan Edwards. Edwards’s (John Wayne) old soldier grows older still as time on Ford’s terms devours all—his pursuit ultimately a thankless one, and in the final frames he departs to once again wander, not any longer needed by the family he’s restored, that house of strangers. Bickle is the outsider finally processed in by news accounts, the house of horrors he makes of a pimp’s den spun into a heroic rescue, as opposed to the kamikaze blowout we saw with our own eyes. In fewer words, Edwards’s journey takes the shape of the turning of the Earth, while Bickle’s is a parabolic curve downward facing, having thrown himself so hard against the bottom-most layer of human filth that there’s no other possible outcome than for him to ricochet off of it, back into the light.

All of which, adherent to the pessimist-tragic mode favored at the time by the Gordon Willis/Haskell Wexler/Vilmos Zsigmond-darkened palettes of American movies, is predicated by the obsessive heat of Schrader’s script; it’s Schrader who sets the pendulum to inscribe Bickle’s fate, now doomed, now redeemed. Scorsese’s actualization of Schrader’s nightmare vision is a little bit bigger and broader than what was ordered—there’s a Hitchcockian vividness to the colors, sounds, and sensations, woven so delicately into the realist fabric as only to be detected as chord changes. This approach doesn’t invalidate Schrader’s structure but it liberates the viewer to process the fiction as having a fantastic quality, and to question its claims to authenticity, yet also to embrace it without conflict or contradiction. This reflexive quality raises the artwork’s intelligence quotient out of the reach of the somewhat reactionary (and highly dangerous) daydream that forms its foundation—the righteous white man cleaning up the sewers with a kit of well-chosen firearms. What forms of this id-ego dissonance within the same film, hopefully, is a provocation aimed at the viewer to wrestle with dilemmas similar to those once imparted to us by Dostoevsky—in a chain that links Crime and Punishment to Taxi Driver by way of Robert Bresson’s Pickpocket (another Schrader touchstone). While in pursuit of his own, romantic ideal, Bickle endeavors to convert a life of nonstop service (first military, then private sector) into one brief, shining moment of agency. The price exacted is measured in blood, its resolution arguably only reconciled by a clean break from reality.