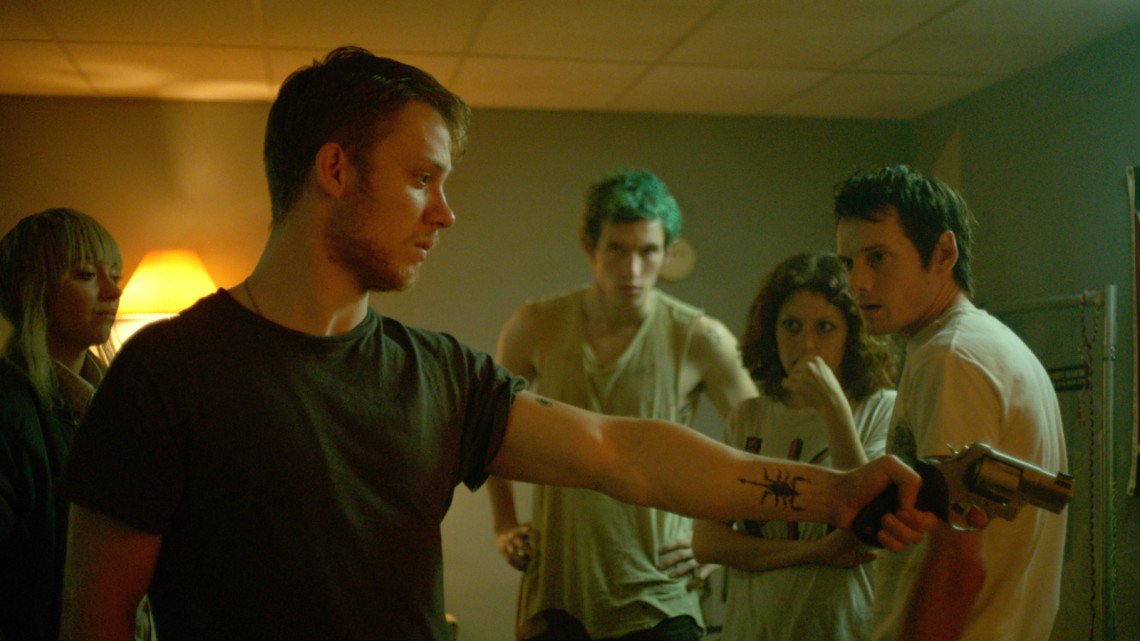 If Jeremy Saulnier’s Blood-Simple-by-way-of-ultraviolence sophomore feature Blue Ruin demonstrated anything, it’s that the young director can effectively stage dread-laden bloody setpieces. Though stylish and gritty, Blue Ruin underwhelmed due to labored pacing and an underbaked central conceit, but whenever Saulnier arranges a suspenseful scene in a claustrophobic space—Dwight’s (Macon Blair) first murder in the bathroom, his escape from his sister’s home (especially the flashlight-lit floor-level shot of him as the feet of his would-be killers make careful steps just inches away), and the final bloody showdown—the film really cooks, and provides the adrenaline rush like the very best genre thrillers. Blue Ruin at its best makes you wonder what a streamlined Saulnier film would look like.

Enter Green Room (or Punks v Skinheads: Dawn of Duct Tape), an honest-to-God sick flick out of the midnight movie tradition that takes all of Saulnier’s strengths and turns it up to eleven. The premise is simple: The DIY hardcore group The Ain’t Rights (Anton Yelchin, Alia Shawkat, Callum Turner, Joe Cole) witnesses a murder in a shithole skinhead venue in the outskirts of Oregon and the white supremacists that run the joint, led by the collected Darcy (Patrick Stewart) and his second-in-command (Blair again, whom I oddly loved here more than in Blue Ruin) take them, along with the victim’s friend Amber (Imogen Poots), hostage. Saulnier’s script sketches out the characters just enough to make them distinctive and the performances shade in the nuances, but Green Room doesn’t spend more time on characterization than it needs. It communicates who they are and puts them between a rock and a hard place as quickly as possible, and then begins bloodletting.

Saulnier plays Green Room’s tension like a helium balloon, spending the first half-hour blowing it up and slowly letting the air out with every frightening moment. To his credit, Saulnier hardly lets the knife-twisting structure feel programmatic, partially because he keeps the full extent of the skinheads’ plans in the dark until the last minutes, but mostly because he highlights the equal parts ineptitude and desperate know-how of his underdog punks. Though their fuck-you aggro energy keeps them running like warriors, even when it becomes clear that most of them aren’t going to make it out alive, they’re all clearly scared and in way over their heads, conveyed beautifully by the actors’ tear-stained faces and muffled sobs. The much-ballyhooed graphic violence—limited only to sudden, shuddering bursts rather than a full-on onslaught—confirms Saulnier’s unwillingness to sanitize the reality of Green Room’s premise: These are Good People in the Wrong Place at the Wrong Time, and they’re outnumbered.

Using the suffocating space along with the inherently creepy Oregon woods to his full advantage, Saulnier stages Green Room wonderfully, first establishing the narrow, limited environment and then using every inch of it in the drawn-out battle, capitalizing on the small, crucial details—a fire extinguisher, amplifiers, and duct tape become crucial tools in the punks’ battle. Saulnier’s camera soaks in the venue’s foreboding grime, highlighting the initial dirt and grit, and later the pools of blood that cover the floors and walls. Saulnier frequently cuts away to the venue’s immediate surroundings to track the skinheads’ clockwork-like strategy to contain the situation, first with carefully calibrated deception, then with box cutters and bloodthirsty dogs. While it’s compelling action, it primarily emphasizes the fucked-both-ways situation that the punks are stuck in. It may be a living Hell inside the green room, but it’s no prettier just outside the walls.

Green Room functions perfectly well as a no-nonsense B-movie thriller, and anyone who gets a kick out of visceral action and shots of X-treme violence will find at least something to like about it, but Saulnier packs the film with subtle implications that go beyond any sort of mindless nihilism. Saulnier spends the first act detailing a day in the life of a DIY group—siphoning gas, sleeping in a car, playing for change—all to maintain their principled integrity and credibility (they, of course, have no social media presence because it’s all about the immediacy of the live show); in the rest of Green Room, he takes just as much care depicting Darcy and his gang’s meticulous process to keep their white supremacy group thriving and out of sight of the authorities. While he doesn’t draw a nasty punks = skinheads comparison between the two—the Ain’t Rights are noticeably uncomfortable in the company of “boots and braces” types—he sets his sights on the methods both underground “bands” take to hold onto their purity, even if one uses that term very differently than the other.

But to state the obvious: When the Ain’t Rights and the skinheads are put in mutual danger, only the latter is willing to kill people and stage it as an accident to keep up appearances. The band members’ hardcore façade waxes and wanes as the real fear of death approaches them—well, all except for Amber, the only one who fully understands the type of danger they’re in—and as the film goes on, they start to act like the kids they really are. (One of the more telling, heartwarming moments is when the Ain’t Rights all admit their real desert island band after providing their “cool” choice to a college radio interview the day prior.) If Green Room has a political dimension, it’s that organized bigotry doesn’t flourish on its own; it has to be carefully maintained above spilled blood and broken bones. Hatred thrives at the expense of innocent lives, and though Saulnier doesn’t adopt a po-faced approach to his material, that idea shines through the film’s genre surface. Sometimes it takes real war to see the most sinister purposes. 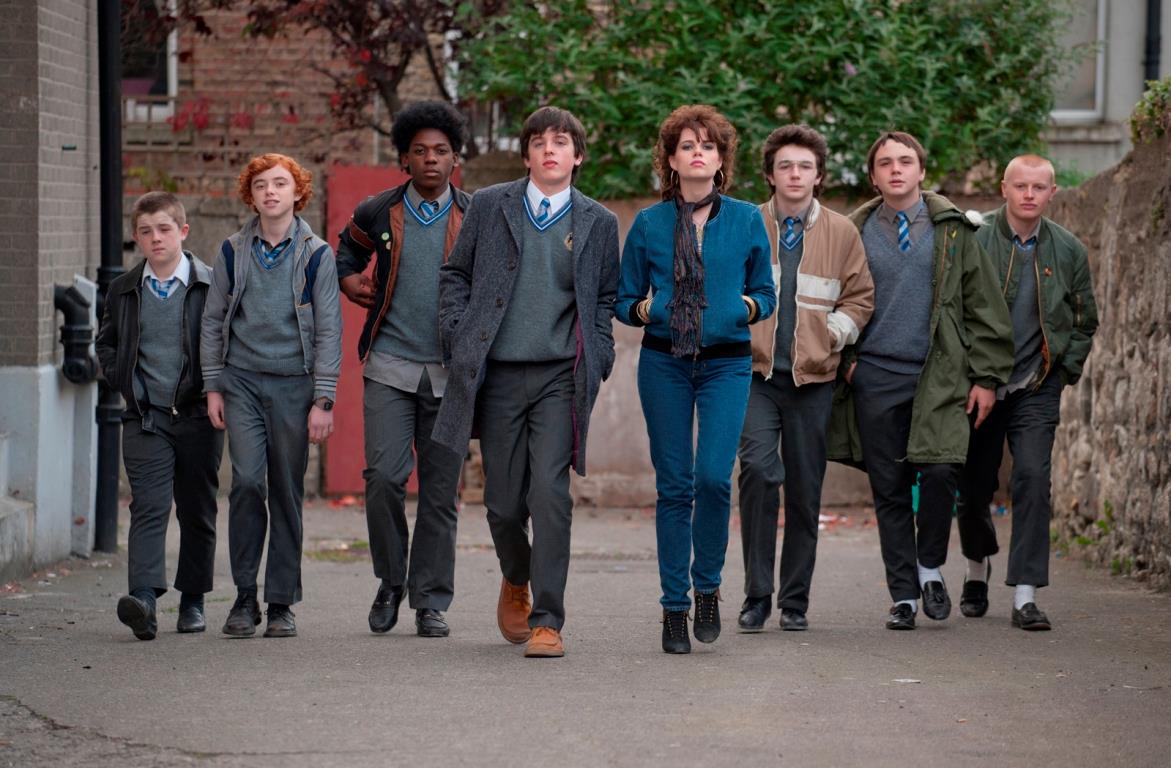 While the punks are stuck in the green room, the dreamers are stuck on Synge Street hoping to find a better life far away from there. At least that’s the running thread in John Carney’s 80s musical dramedy Sing Street, about a wide-eyed Irish teen who starts a band to impress a girl and finds his passion, first love, and himself in the process. Though the film is exactly as earnest and sentimental as that logline sounds, Carney fills in his nostalgic semi-autobiographical look at 1980’s inner-city Dublin with just enough personality, specificity, and genuine sweetness that it mostly stays a charming romp and rarely tips into cloying territory.

The teen in question is Conor (Ferdia Walsh-Peelo), a shy kid forced to attend Synge Street CBS, a rough-and-tumble Jesuit state-school after his family’s financial difficulties force him to leave his private school. Packed to the gills with bullies, indifferent teachers, and a stern principal (Don Wycherley) implied to be a pedophile, the school is a place of constant torment for Conor, but his home life isn’t a picnic either. His parents (Aidan Gillen and Maria Doyle Kennedy) are constantly fighting and on the brink of separation; as a result, a tense, oppressive air hangs in the house. More importantly, they represent what happens when you settle for “good enough” in a nowhere town than chasing something bigger far away, something that Conor’s stoner dropout older brother Brendan (Jack Reynor, far and away the best of the cast) constantly reminds him about whenever he’s not giving him records, preaching wisdom, and showing him the wonders of Duran Duran music videos on TV.

Like plenty of other dejected, isolated kids in the history of recorded time, Conor escapes into music, and when he spots the beautiful Raphina (Lucy Boynton) across the street from the school, he claims he’s in a band and that he needs a model for his music video. So, of course, he starts a band called Sing Street with the help of young allies and eager classmates, and they’re off to the races. Soon, the band drops covers in favor of original songs at the strong behest of Brandon, teams up with Raphina who acts as their costume designer and makeup artist, and guess what, they’re actually really good.

Most descriptions of Sing Street make it sound like a nauseating exercise in feel-goodery, something to reasonably expect from Carney’s heart-on-sleeve previous work (Once, Begin Again). Remarkably, it never enters that territory even when it’s making you feel good, a big feat especially with this material. Carney mostly restrains himself from mawkish tendencies as he affectionately depicts young love between Conor and Raphina, dynamic band practices, and close sibling relationships. But he really excels with the musical setpieces, capturing the intimacy and dynamic scale the best musical sequences can offer, complete with reasonably catchy, toe-tapping original tunes. While an imaginary musical sequence will probably garner the most attention just for the impressive choreography, the 360-degree tracking shot of Sing Street practicing and performing a song in a family living room sells the Magic of Music better than any other scene in the film.

There are some elements of Sing Street that bother me in retrospect—broad-strokes characterization no quality of performance can cover, some narrative hiccups, and maybe just a little too much corniness at times—but they never registered in the moment because Carney wonderfully sells the innate sadness in his subjects’ lives. It’s not just that every character’s home life seems irreparably broken through alcoholism, lack of employment, or mental illness, it’s more their constant fear that they’ll never escape their present state, that they’ll just end up like their drunk, cynical parents. It’s a classic fear, and as the child of immigrants who once took a leap of faith and left their homeland to find a better life elsewhere, it’s hard for me not to connect with Conor’s dreams of escaping to London just so he won’t suffer a too-familiar fate. It’s well-worn territory, but those universal, yet nevertheless moving thematic material Sing Street through its occasional rough patches.

While it’s futile and pointless to play “what-ifs” when it comes to films, it’s really difficult not to imagine a version of Sing Street set from the perspective of Brandon, Conor’s mentor and champion. The most affecting, personal scenes in the film are between Conor and his brother as he shares music, culture, and knowledge of a world outside of his immediate sphere (the film is dedicated to “brothers everywhere”). Though quick-witted and sharp, Brandon’s life is on the downswing, and Carney heavily implies that any hope for him to escape his current dead-end drudgery has long since passed. So what does he do? He channels his energy into his younger brother, giving him the confidence and courage to do what he never did. While Brandon’s palpable joy at watching his brother achieve new heights is undoubtedly poignant, Sing Street arguably peaks when Brandon gives his big speech to Conor about how no one ever acknowledges that he was “once a fuckin’ jet engine.” Sing Street is a very good, occasionally great film (it’s easily the best of Carney’s career), but anytime the film focuses on the sibling’s relationship, it’s so wonderful that it opens up a whole world of unexplored possibilities about what it could have been. It’s a satisfying film that leaves you wanting more, and not in the way it desires.