The success of Key & Peele, Keegan-Michael Key and Jordan Peele’s Comedy Central sketch series, has as much do with its recurring subject matter as it does with its comedic consistency. The series deservedly received heaps of critical acclaim for the comedy duo’s unique take on race relations in Obama’s America, particularly the linguistic and socio-cultural struggles of being biracial, but Key & Peele never got enough credit for simply being funny more often than it wasn’t. Sketch comedy inevitably hits and misses, and the best of the genre—Monty Python’s Flying Circus, Kids In The Hall, Mr. Show, Chappelle’s Show—separate themselves from the pack because of their specific visions as well as their evenness, maximizing their successes and minimizes their duds. Key & Peele arguably stands as the defining sketch show of the decade for its cultural relevance and its unfailing hit-to-miss ratio, aided by the team’s mastery of sketch structure, their goofy sensibility, and their cutting wit.

Unfortunately, Key and Peele don’t bring that kind of consistency to their first major motion picture Keanu, an intermittently funny action comedy revolving around a stolen kitten and drug warfare. Peele plays Rell, a stoner layabout without much direction in life, and Key plays his cousin Clarence, an uptight, housebroken family man living the traditional suburban lifestyle, but since both characters are so broadly sketched, they’re effectively just playing “themselves” (read: their comic personas). Suffering from a recent breakup, Rell finds a kitten outside his door; he names him Keanu, dotes on him, and photographs him in constructed miniature film scenes in some of the funniest sight gags in the picture. But little does he know that Keanu actually belongs to a drug kingpin, and he escaped his clutches during a gangland massacre. When gangsters break into his apartment and take Keanu, Rell and Clarence team up to go search for the pet, only to find themselves mixing it up with hardcore criminals who mistakenly believe they are a legendary murderous duo who have a penchant for knife-wielding torture.

As one can reasonably surmise from that brief synopsis, the story is fairly half-baked, lurching awkwardly from scene to scene until it arrives at a fairly predictable conclusion like, to invoke a cliché, a protracted comedy sketch. To be fair, Keanu’s narrative solely functions as a clothesline for co-writers Peele and Alex Rubens, a veteran writer from the sketch series, to hang jokes and setpieces on, but the actual comedy is so uneven that it’s difficult not to pay attention to the flabbiness of the plot. Peele and Rubens are fairly indifferent to pacing, preferring instead to let the actors riff on certain premises, like Clarence trying to convince up-and-coming gangsters of the blackness of singer George Michael. This choice occasionally works well, but invariably drags down many scenes that start from good premises, e.g. there’s an extended bit involving a drug deal at actress Anna Faris’ house that starts off genuinely amusing but eventually falls into a lame rhythm that renders the whole scene a slog. Keanu repeats that pattern constantly, with some scenes that shine, but too many that hammer good ideas into the ground. 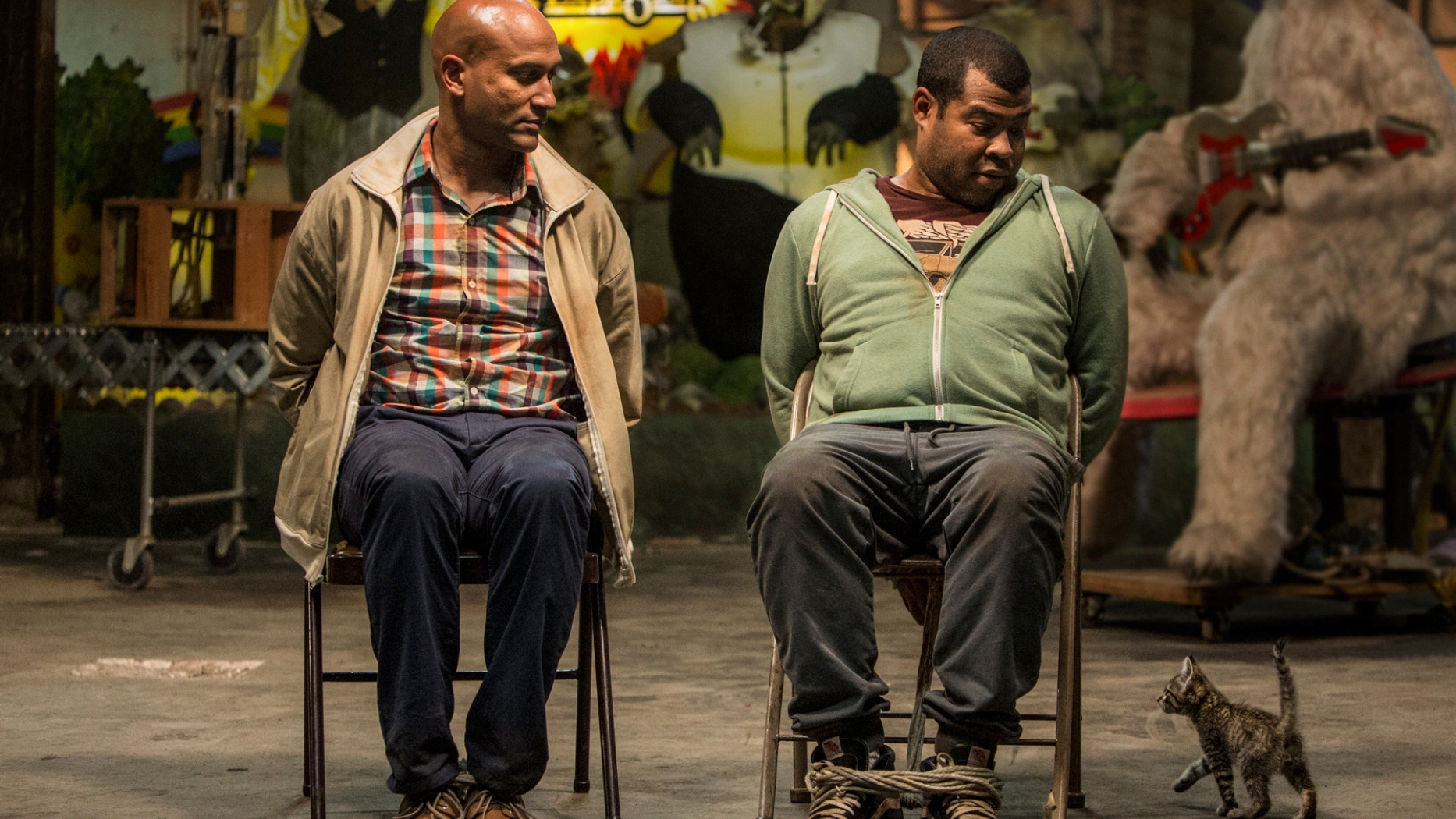 Furthermore, Peter Atencio’s showy direction doesn’t help matters at all. While Atencio’s visual flair invigorated many Key & Peele sketches, bringing a broad “cinematic” style to an otherwise visually flat genre, its limitations are on full display here. During the action sequences, he indulges in too many slow-motion shots that merely suggests high-octane action but doesn’t quite deliver it. This was great in short bursts, but in the last bloody half hour, it becomes a bland display. When Keanu breaks from the action, Atencio’s direction is serviceable, relying on Jas Shelton’s crisp cinematography and reaction shots to do the heavy lifting. Fortunately, Key and Peele have some of the funniest facial reactions in the business, so the near-constant shot-reverse shot doesn’t become quite so dull.

Though all of the actors heavily commit to Keanu’s central conceit, the writing doesn’t service the performances all too well. Method Man plays a variation on the character he frequently plays, but he works quite well as the gang leader Cheddar, a hardcore criminal who gets frustrated by losing at video games like the rest of us. Tiffany Haddish imbues warmth and personality into Hi-C, the sole female gang member, but her character is too one-dimensional for it to truly register. The rest of the main gang members—Bud (Jason Mitchell), Trunk (Darrell Britt-Gibson), and Stitches (Jamar Malachi Neighbors)—get their fair share of funny lines. Will Forte’s wannabe-tough pot dealer occasionally brings laughs when he’s frantically blubbering his way through every dangerous situation. But at best, the performances are scattershot because Keanu doesn’t allow any of them to really stand out from the group.

If Keanu underlines anything, it’s Key and Peele’s natural, dynamic chemistry. For anyone even vaguely familiar with their work, it’s no surprise to see how well they play off each other. Their organic banter steals every scene, and they can deftly switch between straight man and comic roles in any given situation. Keanu is funniest whenever its two leads are allowed to just be funny within heightened situations—their initial meeting with Cheddar in a strip club, and their unlikely escape from a torture-porn scenario are the film’s two big highlights—because it’s clear that both bring their own strengths to the table and support the other any way they can. It’s a shame that Keanu frequently fails the duo not just by constantly separating them, a source of endless frustration, but also by hamstringing them to a weak one-joke story. When they inevitably get together for their next big movie, let’s hope they stick to the “buddy” part of the buddy comedy.