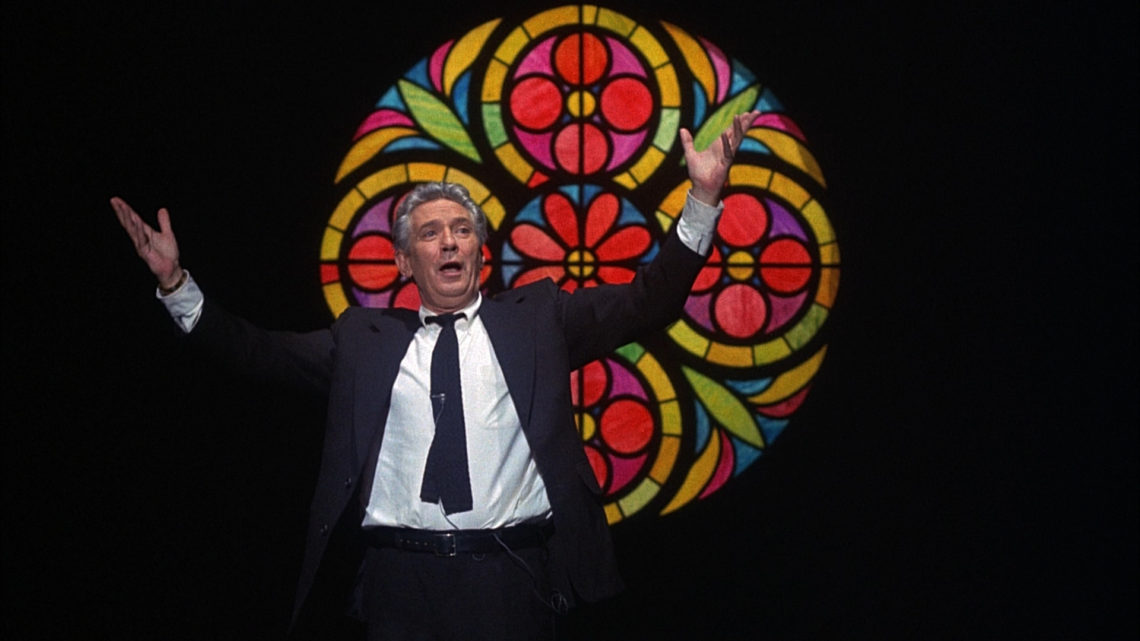 Sydney Wegner writes this essay in commemoration of the 40th anniversary of Sidney Lumet's satire "Network."

On the 40th anniversary of its release, Network, it pains me to say, is more relevant now than when it was back in 1976. Its insights on the dire state of the American public’s desperate anger combined with their willingness to allow people in power to bend that anger to suit their own needs have manifested themselves in an election that was traumatizing and bitterly fought. As mean and outlandish as Sidney Lumet’s film is, it did not predict anything so wild as a reality-show-star president, and its value now is in helping us understand how we ended up here, if we are ever to prove its pronouncements wrong.

Network is shot entirely in oppressive, artificial environments. The first exterior shots of the Union Broadcasting System’s skyscrapers are from below, looking up—the buildings reduced to an overwhelming grid of brick lines and dark empty windows. Within the massive towers are overly tidy, cramped offices, yawning boardrooms in which the human inhabitants are dwarfed by furniture, impersonal apartments and over-decorated homes. Clothes are always neat and clean, men pinned into suits that make them look alike and women in luxurious but drab and forgettable business attire. Characters—usually seen only yelling or conspiring—are often shot with objects in between the camera and subject, keeping them just out of reach from the audience (case in point: a scene of quarreling lovers with taxis and large trucks obscuring their interactions, thus robbing the moment of any intimacy with the viewer). Faces look haggard and worn in close-up, constantly distressed, with even their laughter just a bit too hysterical or maniacal. There are no bright colors, nothing green or natural—only man being oppressed and swallowed up by the environment he has built. These visual cues push Network into science-fiction territory, forming it into a meditation on the fear of rapidly advancing technology and how it influences future generations. 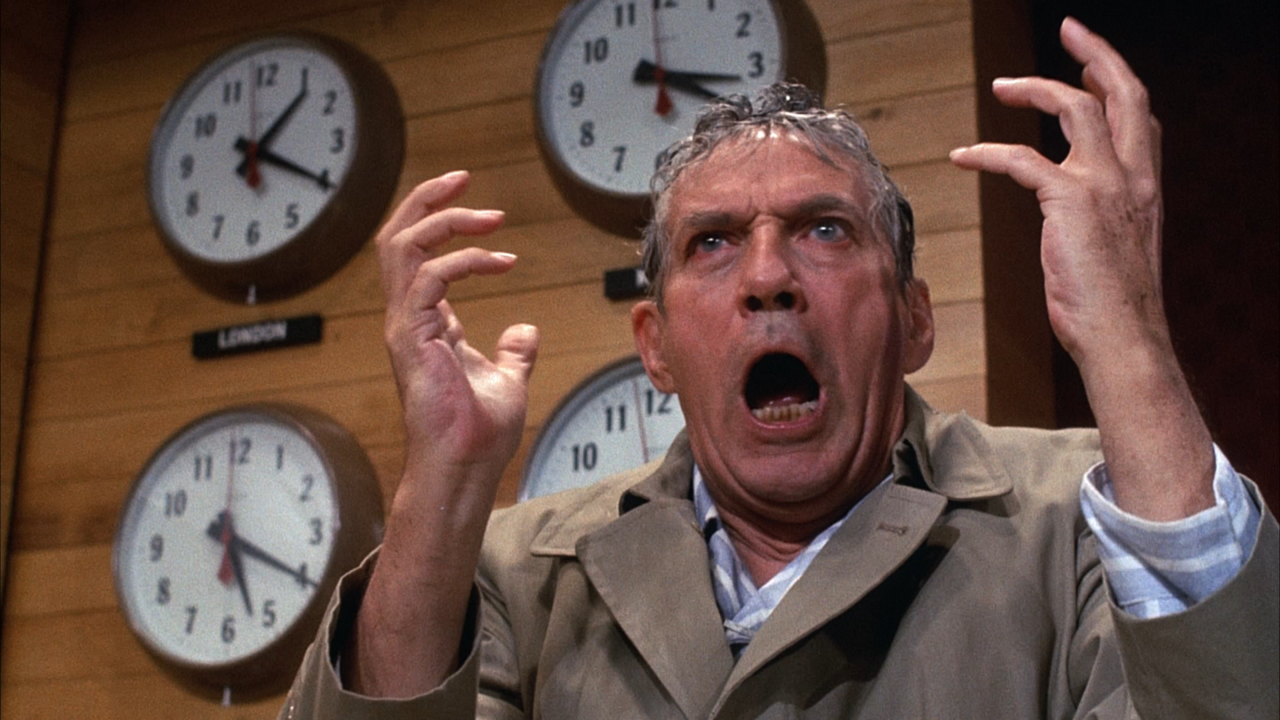 The only bright lights are television spotlights, and the only scene full of color and light and music is the garish production of a show that features Howard Beale, the network news anchor who has lost his mind and is subsequently given a role as a primetime prophet in exchange for not killing himself on air. The rest of the movie revolves around his rise and fall, the lives of the characters at his raving mercy. Most people know Beale (an impressive performance from Peter Finch as possibly the only sympathetic character in the movie) from his famous “I’m mad as hell and I’m not going to take it anymore!” speech. This outburst is close to the beginning of the movie, and it is this breakdown into madness that prompts Diana Christensen (Faye Dunaway), UBS’s programming head, to make him a star instead of have him hospitalized. Alongside that is a subplot in which Diana finds a guerrilla group and pitches them their own show as well, again tapping into the sensationalist nature of the anger they incite. She doesn’t care about the content, only the high ratings she is sure they will generate. Both threads intertwine into a finale that was probably shocking at the time, or dismissed as too on-the-nose, but, viewed now, takes on an especially crushing significance knowing we learned exactly nothing from its implications.

Part of the genius of Network lies in Paddy Chayefsky’s construction of his screenplay as a television show within a story about a television show, inspired by the shallow entertainment it’s meant to criticize. It’s a combination of over-the-top screaming soap opera combined with bizarre situations played so straight it’s impossible not to believe they could actually happen. And why not? Why wouldn’t people respond so feverishly to a raving lunatic who so closely understands their troubles, even if he started working for the enemy and had his own blatantly exploitative show that is a mockery of everything news is supposed to stand for? We now know that this essentially became a prophecy, with loudmouth pundits ranting about opinions masquerading as unbiased truths on news stations and the internet. So besides being a pretty devastating drama, it’s also a blacker-than-black comedy, with a deadpan voice-over throughout and dialogue that is often as painful to laugh at as it is funny. It’s as if you’re meant to laugh in defeat, as a last resort when something horrifying is put into unstoppable motion.

Not everything about Network has aged quite as well as its satire—particularly its portrayal of the main female character. Diana Christensen is introduced as a take-no-prisoners businesswoman, by her own admission a failure at everything except her work. Despite her willingness to throw absolutely anyone to the wolves for ratings, there’s still something likable about her. It’s hard not to get taken in by her bright eyes and feverish excitement, making it easy to put the blame on the American public for their bloodlust instead of on her for merely delivering what they want. However, she soon enters into an affair with Max Schumacher (William Holden), a married network executive roughly twice her age. He at first admires her ambition, but later turns on her for possessing the qualities that attracted him to her in the first place. In an intense third-act scene, he calls her “television incarnate,” heartless and incapable of connecting with real life, seeing him only as a part of a script. The age gap is referenced, too, she being of a generation raised on sitcoms and dramas, and this is presented as the cause for her inability to cope with or navigate relationships. Her attraction to him is implied as a father-figure complex, and she is shown to be pitiable and weak, but instead of humanizing her, her weaknesses turn her into a misogynistic villain. Chayefsky and Lumet failed to understand that women don’t act heartless and cruel to get ahead because they are simply cruel people. They must learn to act like men to compete in a male-dominated world. Instead, in Network, a woman like Diana Christensen is not to be respected or awed, but feared—and then pitied, for she is reduced to nothing more than a worthless sociopath. 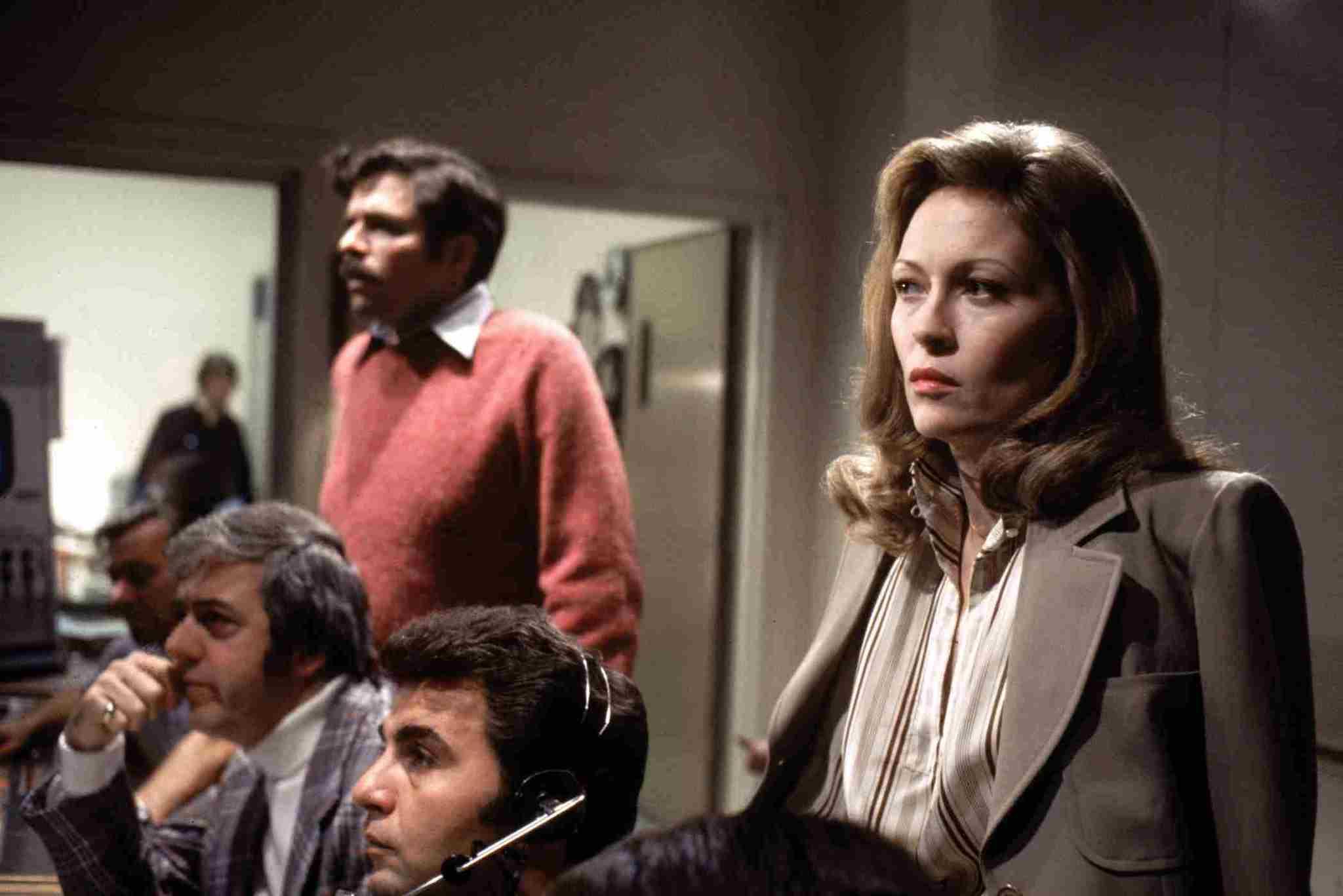 It’s harmful rhetoric, an especially cruel place for a character whose only real purpose is to allow Max the opportunity to cheat on his wife and then correct a mistake. But like all problematic things, we can learn something from it. When you read the next thinkpiece from a 60-something railing against selfish millennials and how they’re dooming the planet, remember who put us here. Max criticizes Diana for her coldness and blames it on television, but doesn’t take the time to reflect on the fact that he and his generation were the ones that built the institution in the first place, creating the generation of alleged monsters to corrupt their own industry. In the same vein, it is the world of men that created a woman who must work twice as hard without remorse or compassion, who must continue to prove herself and show no weakness even when her apparent lack of emotion is exposed. If she connects, she will be discarded or deemed a slut, feared or pitied but almost never respected as an equal. We’ve made large strides in the right direction, but the fact that Network still stands as an almost universally respected member of the “canon” has shown only that its misogyny has either gone unnoticed or been deemed less important than the other lessons the film contains.

Another gripe Network lodged that hasn’t quite come to pass is that the falsity of the idea that TV will rot everyone’s brains. While that argument could still be made, if we are to look at our current administration, it isn’t scripted television but news media who have and will always treat fear as a currency. Like all good movies about fear of technology, it ends with the creation attempting to eat its creator alive. Man has made a system that quickly grows too big to handle, his aspirations for power so high that they overwhelm his ability to think rationally about the consequences. Television is Frankenstein’s monster, though it is without remorse, and everyone in America is complicit in its creation.

That Network is still as relevant and urgent as it was when it was released shows a depressing lack in our collective ability to learn from our mistakes—in this case, putting too much trust in the mainstream media. If we’d stopped paying attention long ago, how would things be different now? We want someone to lead us and tell us what to do, and as long as that’s true, the will of those who desire power above all else will always overcome those who become leaders for the benefit of humanity. As cynical as Network is, it was made on the presumption that television is so transparently ludicrous that when exposed, a difference might be made. It’s only in retrospect, knowing that nothing has really changed, that it becomes truly harrowing. The TV station in Network understands how powerfully people need to connect with someone who will “tell it like it is,” and so it is commodified by the first person ruthless enough to do it. Businesses have always known how to manipulate people, how to take our weaknesses and turn them into profit. The news has done this again during this recent election cycle by tapping into the terror of the public and ramping it up while refusing to deny or condemn or openly endorse, beyond the fact that giving death and destruction 24/7 coverage can become, if not an endorsement, at least an advertisement of it. The question now is whether or not people will continue to fall into the media’s poisonous cycle.