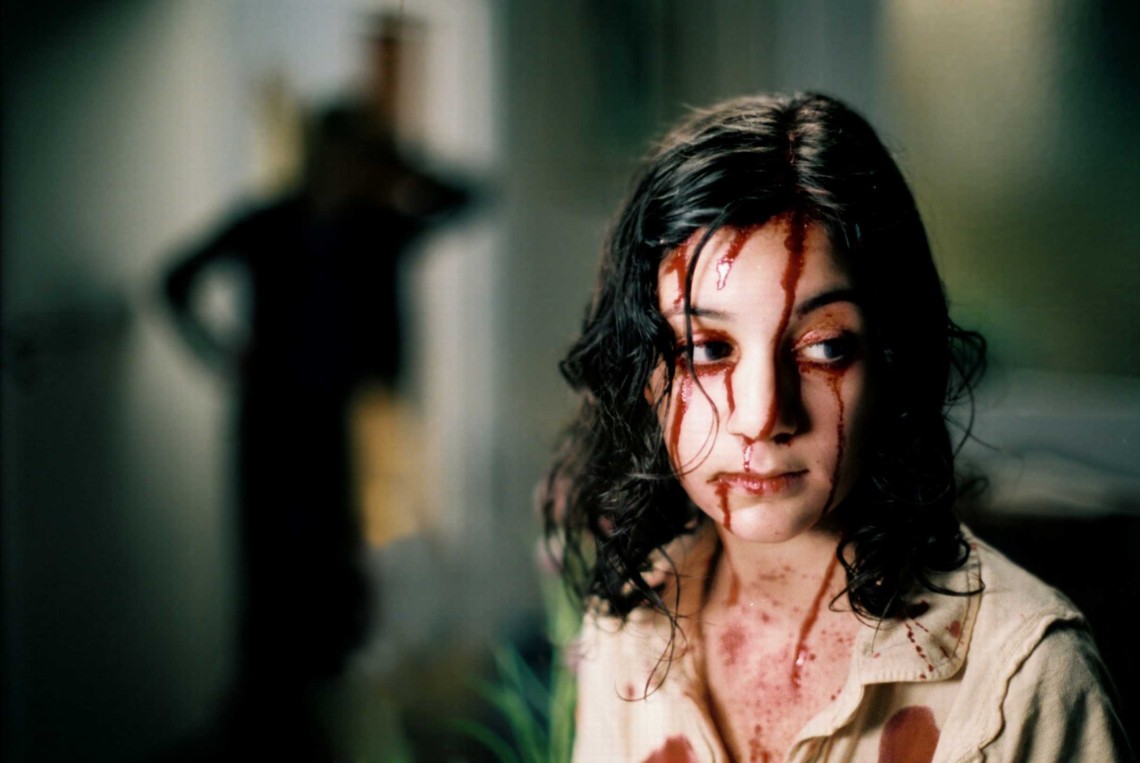 This Week on MUBI: “Let The Right One In”

Editor’s note: We are thrilled to announce that MUBI, the curated online cinema that brings its members a hand-picked selection of the best independent, international, and classic films, is now sponsoring Movie Mezzanine. You can use the discount on this promo page to check out all of MUBI’s selections.

Halloween may be over, but the heldover October title Let the Right One In is better suited for wintry viewing anyway. Set in a frosty Sweden, the film is defined by its brittle environment, of stripped, flimsy branches coated in static tendrils of ice. Dull brown apartment complexes provide a joyless complement to the bleakness of nature; if anything, their spartan design feels more hostile than the empty forests nearby for having been deliberately crafted. Even by the standards of vampire flicks, this is a cold movie, one where bloodletting excites not for its visceral thrill but for the possibility of warmth that it offers. But the blood, too, looks frigid, dark from lack of oxygen to the point that it seems to congeal the second it leaves the body.

The emotional core of the movie centers on the alienation of tween loner Oskar (Kåre Hedebrant), who faces bullies at school and neglect with each of his separated parents Sitting on an iced-over roundabout one night, he meets Eli (Lina Leandersson), a young girl who immediately grabs Oskar’s attention for walking around in subzero temperatures in light clothes and no shoes as if it were the height of summer. Their meeting, of Oskar outside his single mom’s home and discovering a strange creature, is vaguely reminiscent of Elliott stumbling upon the alien in his backyard in E.T., and their initial, terse conversations have some of the same cautious whimsy as that film.

The erotic element that informs most vampire movies is present here, but where other entries in the genre focus on the narcotized hedonism of the ageless bloodsuckers, Tomas Alfredson’s film keeps its perspective rooted to Oskar, the inexperienced boy on the cusp of puberty who finds himself attracted to Eli not for her looks or perversely adult mannerisms but for the emotional bond he forms with her. Most of the time, their interactions resemble an ordinary coming-of-age film, with sweet quirks of connection such as tapping out Morse code messages to each other on the shared wall of their respective apartments. Eli even gets Oskar to stand up for himself, and though this prompts a bit of violence against one of the classmates who torments him most, one gets the sense that his mild bloodletting is a better pressure valve than what he might do with that knife collection of his if he continued to bottle up his anguish.

When the subject of sex comes to the fore, it is less in Oskar’s fumbling, nervous attempts at physical affection than in the unsettling relationship Eli has with her middle-aged companion, Håkan (Per Ragnar), whose guarded jealousy casts him in a complex light of both predator and willing servant. Only when one intuits that Håkan is a glimpse into Oskar’s future—the seemingly same-aged boy who grows older and feebler while Eli remains young and voracious—that the film reaches the apex of its horror, the realization that even if Oskar escapes his terrible life and gets the girl, some day he’s gonna end up a shuffling slave, pouring acid all over his face when he finally gets caught so no one can tie him back to the lover who will have long forsaken him by then.

This throughline gives the film a pervasive sense of melancholy that overrides scares in favor of discomfort and debilitating sadness. Even the grisly climax, where Eli takes such revenge on Oskar’s bullies that any possibility of satisfaction is muted by revulsion, ultimately stresses the ephemerality of this victory, which will force the boy to leave everything to go into hiding with Eli. The final scene is a sweet one, but the doomed nature of the love on display prefigures the future endeavors of Anderson, whose subsequent adaptation of Tinker Tailor Soldier Spy stressed the weariness and isolation of its spies, and cinematographer Hoyte van Hoytema, who not only gave the John Le Carré adaptation its hollow intimacy but, recently, lent a deathly pallor to James Bond. Most horror films are best watched in groups to disperse tension and fear among friends; here is one best served for group viewing just to remind oneself that life isn’t so lonely as all that.

If you’re interesting in watching the original Let The Right One In on MUBI, use your Movie Mezzanine coupon for an exclusive discount and access to a breathtaking library of cinema!