The Fluid Identity of Janelle Monae

Kyle Turner compares the gender and image fluidity of Janelle Monae to David Bowie and Prince in this essay.

With her acclaimed albums and EPs Metropolis: Suite I (The Chase) (2007), The ArchAndroid (2010), and The Electric Lady (2013), the inimitable Janelle Monáe created a funk- and R&B-inflected universe in which she could explore the ways in which female identity could be commodified and, in turn, modified. Now, you can see Monáe at your local cineplex: in Hidden Figures wearing a prim, expertly stitched blue dress, clipboard in hand while standing in a testing room at NASA, her hair a little short; or in Moonlight standing in the dining room of a very nice house in Miami, her hair a bit longer now, pulled back with a white hair tie, wearing an unbuttoned button-down shirt that casually clings to her body, striped in white and baby blue. That Monáe opts to tweak her presentation marginally for these roles does not negate the artist’s queerness. Like David Bowie and Prince before her, she’s using the camera as a fun house, playing with her fluid identity in music videos and now in the movie theater.

For queer musical artists—and, to be clear, by using the term “queer artist,” I don’t mean that the artist him-/herself is LGBTQ, but that his/her work exists within that milieu, examining notions of identity, sexuality, etc.—the camera is a palette on which to expand their own experimentations with identity. It’s not unlike the stage on which they perform, but larger: Their reach is grander, the possibilities are different, and, as far as when these artists enter the world of narrative filmmaking, the world seems a little more expansive.

These artists’ music-video work, though, is as crucial to building their personas as it is to continually augmenting them. Music videos work as a blue print, but allow for a continual evolution in the way their image is presented. 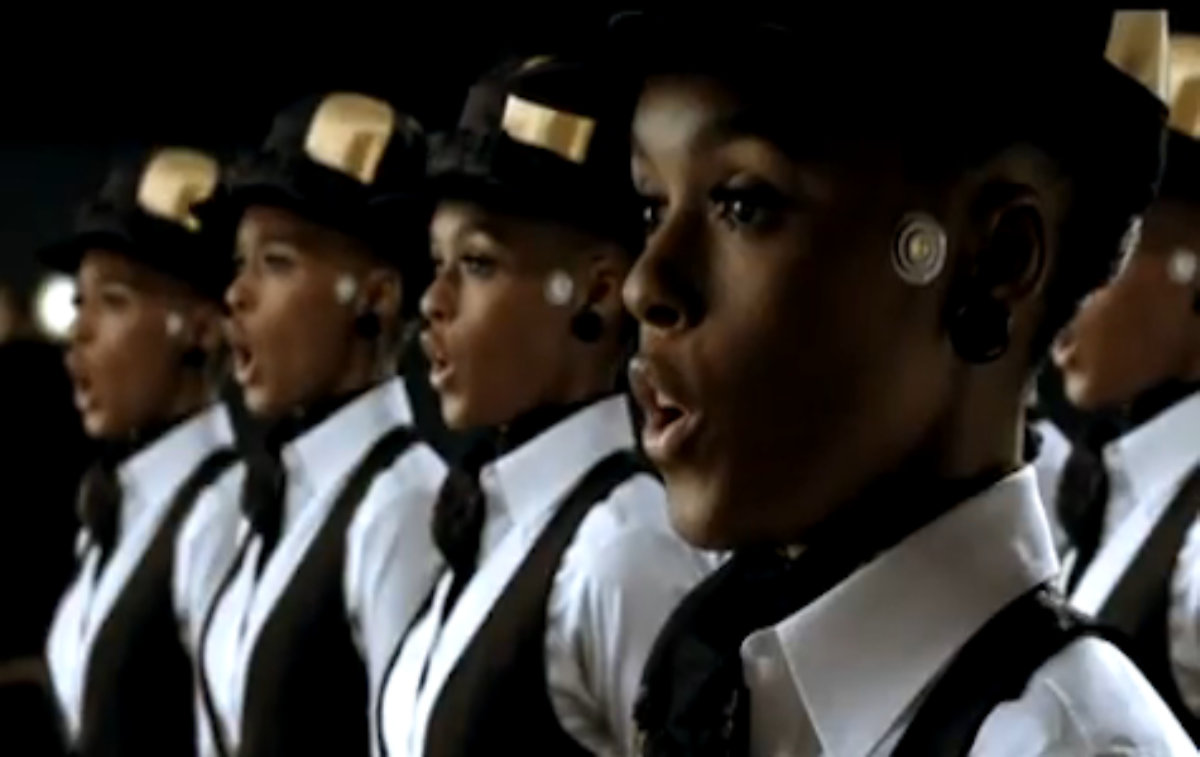 Monáe in particular has, throughout her career, been interested in two things: the ways women are relegated to lifeless servitude; and a kind of androgen that functions not merely within her visual aesthetic, but also in her movements. In the video for “Many Moons” (2009), her android persona has her take on the form of a dandy (black-and-white tux), an aristocrat (grey suit, top hat), a jockey, and an android reminiscent of Maria in Fritz Lang’s Metropolis. Walking down the runway, her different iterations are there to be sold. Up on stage, though, as a myriad of images—archival footage and pop-art-inspired graphics—are overlaid on her face and eyes, she dances, her arms and legs fluid, emulating what looks like young Michael Jackson at a Jackson 5 performance. “Many Moons” suggests that Monáe has exerted autonomy over her identity in spite of its ending, when her primary android dies, which could be read as a metaphor for the ways in which the music industry can have a stranglehold over one’s self-expression.

If there’s a contemporary artist who has had an appreciable amount of control over the way she presents herself, Monáe is one. Explicitly saying “I am not for male consumption” on Twitter, she has used her music-video and film work to toe that fine line. “I wanna be queen,” she says defiantly in the “Q.U.E.E.N.” video (2013), a track preoccupied with society’s gendered expectations of what’s appropriate for black women to say, do, and think. The video is set is in a museum where Monáe and her cronies have been frozen in time for being rebels, and one can’t help but imagine that their rebellion was queerness itself. “Categorize me, I defy every label,” she says, looking directly into the camera.

While her roles in Moonlight and Hidden Figures could be considered more traditionally feminine, that doesn’t mean she is undermining the queer sensibility she cultivated through her decade-long music career. On the contrary, in both films, she is able to more subtly explore the parameters of power within the confines of the small worlds she inhabits. Though her character in Moonlight—Teresa, the surrogate mother of Chiron (Alex Hibbert as Little/Ashton Sanders as Chiron) and the wife of Mahershala Ali’s drug-dealing Juan, Chiron’s surrogate father—can be easily labeled in relation to other male characters, there’s nonetheless a very palpable sense of her own life in the film, outside of her relationship to Juan and Chiron. At the table, trying to coax Little to say his name, to eat, and to give something of himself, she gives something of herself in her body language. She tilts her head, or side-eyes Juan, and she flashes that same knowing smirk she often brings to her musical performances—this is the body language of someone very sure of how to articulate what they want to say wordlessly. In Hidden Figures, as mathematician and at-the-time aspiring engineer Mary Jackson, she is the most forthright of the three lead characters with her opinions, attitudes and desires, finding power from a situation of institutional powerlessness. When Monáe delivers the film’s funniest line—“It’s equal rights! I have the right to see fine in every color!”—she bobs her head a little, slightly rolling it around as she says it with emphasis. And at the beginning of the film, she gladly tailgates a police vehicle “escorting” the trio to work. Monáe delivers that line in a triumphant way that suggests an implicit and explicit subversion of authority.

Artists before her have been just as keen to examine the ways in which their musical identity can seep into another part of their career. David Bowie’s queer iconography seems to prevail slightly differently depending on where you know him best from. You have Bowie the performer, aka Ziggy Stardust, with the lightning bolt emblazoned on his face and the flaming hair leaving a mark on the galaxy. Or there’s Bowie as Jareth the Goblin King in Jim Henson’s Labyrinth, donning a sand-colored wig atop his head and the tightest pants you ever did see. Bowie was a gleeful shapeshifter, an aspect of his career that was built and embedded into his very life as a performer.

Notions of masculinity and femininity seem to be irrelevant with Bowie, at least for a considerable period of his career. He, space oddity that he was, almost disregarded it as a part of his lexicon, at least in music videos like “Life on Mars?” (1971), where a powder-blue suit does nothing to accentuate any sort of gendered presentation. Even in a video like “Ashes to Ashes” (1980), Bowie—this time, somewhat discernibly, a clown—is a thing, a person unto himself.

His film work was not entirely different from that, though he had to couch his deconstructions of gender within the confines of more traditional presentations. In Nicolas Roeg’s The Man Who Fell to Earth (1976), Bowie plays Thomas Jerome Newton, an alien with an ethereal quality. His role here requires him to act beyond our conceived gender norms: Bowie’s gait, wrist movements, and way of sitting down exude a sense of earthly behavioral boundaries being utterly foreign to him. And in Nagisa Oshima’s Merry Christmas, Mr. Lawrence (1983), he plays a character that challenges the rigid forms of masculinity within the POW camp in which he’s trapped. The connection Bowie’s Jack Celliers has with Captain Yonoi (Ryuichi Sakamoto) floats like an unspoken desire. Bowie’s work would never stop being transgressive about gender norms, even late in his career with videos like “The Stars (Are Out Tonight)” (2013), with Tilda Swinton playing his wife. In this video, Bowie and Swinton exchange genders, and thereby create a metaphysical dialogue about gender itself.

If Bowie implicitly wanted to discard masculinity from his vocabulary, Prince had no problem embracing it and then turning it on its head. In his videos for “When Doves Cry” (1984) and his films Purple Rain (1984) and Under the Cherry Moon (1986), Prince seeks to take masculinity and make it elastic. Can Prince hop on a motorcycle with four layers of purple sequined clothing in Purple Rain and still be seen as “masculine”? Can the same be said of him in the black-and-white Under the Cherry Moon as he lies on his side, polyester suit with sequins, on a rock near the ocean, as waves crash upon the craggy boulders? Absolutely! Prince’s career and image was about sex, his persona perhaps the closest to a polymorphously perverse pop star. Even the symbol that served as his logo does an expert job of describing the ways in which he expanded the definitions of what it meant to be masculine: Prince takes the gender symbol for Venus (often used to represent female), splashes it in purple, and adds an arrow at the bottom and a curled line between the circular top and the line coming from it. The Venus symbol is transformed not into something masculine, per se, but into something more genderfluid—much the same way Prince presents a transformed, bent and queered version of masculinity.

As queer artists continue to experiment with their work and, in turn, who they as a part of their art, film and music video function as mirrors with which to try on and perfect new identities. Janelle Monáe’s defiance moves fluidly between her video for “Many Moons” and her role in Moonlight, and so was the same for David Bowie and Prince. These are images refracted through light and whose “owners” maintain a relationship with their own image, exerting an agency over them but a fluid relinquishment of that ownership as well. You might say that for these actors and musicians, queerness is more complex and nuanced than a little ground control.