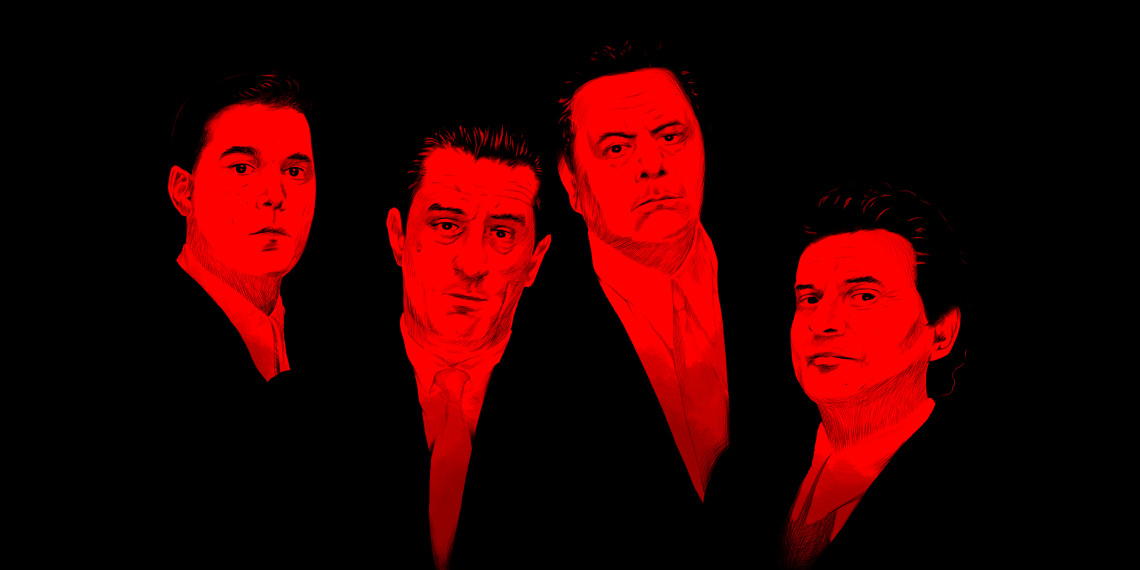 “That’s Italian!”: On the 25th Anniversary of “GoodFellas”

I was fifteen years old on September 21st, 1990 – the day Martin Scorsese’s GoodFellas opened in theatres — and a full two carloads of us had negotiated the necessary curfew extensions to go see a 10:30 PM show at the Showcase multiplex in Revere, a suburb just outside of Boston near the airport. If memory serves, it was me, Steve, Rossi, Shaydogs, Jay, Dave, Vinny, and his little brother Brian. (Yes, the lack of female companionship was a fairly regrettable constant in our early high-school adventures.) We were a movie-mad bunch of kids, but some had it worse than others. I had it pretty bad.

As far back as I can remember (sorry, couldn’t resist), I was always obsessed with movies. I’d rush home from church on Sunday mornings to catch “Siskel & Ebert,” hung out on weekends watching classic double features on the big screen at the Brattle Theatre in Harvard Square, and was generally insufferable during conversations regarding Marty, Woody, Spielberg or Spike. I’d always made sure to note the name of the director – figured it was like the author of a book – but I was only beginning to comprehend the actual nature of the job.

While shooting goofy shorts on a VHS camcorder, making clunky edits and audio dubs via two piggy-backed VCRs, I was just starting to wrap my mind around visual storytelling. It might be thuddingly obvious to point out that everything looks different depending on where you put the camera, but perhaps less so to appreciate how that placement can manipulate moods. The matters of where to cut and when, how to use music and what can be left unsaid – all undiscovered country I was revved up to explore.

Which is a long way of explaining why GoodFellas struck the bunch of us like a 146-minute bolt of lightning. So much of Marty’s masterpiece has been ripped-off,  co-opted and absorbed into mainstream movie grammar that it’s probably impossible to convey just how dangerous and exciting it felt at the time. Liotta’s sneering narration, unredeemable characters meeting their ugly ends, the hilarious ball-busting punctuated by shocking bursts of violence – all hurtling forward to a relentless rock n’ roll soundtrack.  The movie had a bad attitude. Punched up with freeze-frames, slow-motion and Scorsese’s restless, roving camera, seeing GoodFellas for the first time was like being on a roller-coaster except with bad fashions and more profanity.

We also had an ideal audience. That Showcase in Revere is quite nice these days, but the early 1990s were hardly a high-water mark for theatrical exhibition. Most of their screens were still in mono, and I fondly recall the ashtrays all over the lobby along with friendly signs reminding you to please extinguish your cigarettes before entering the auditoriums. There were better movie theatres in our area, but none so lenient about letting underage kids into R-rated films. 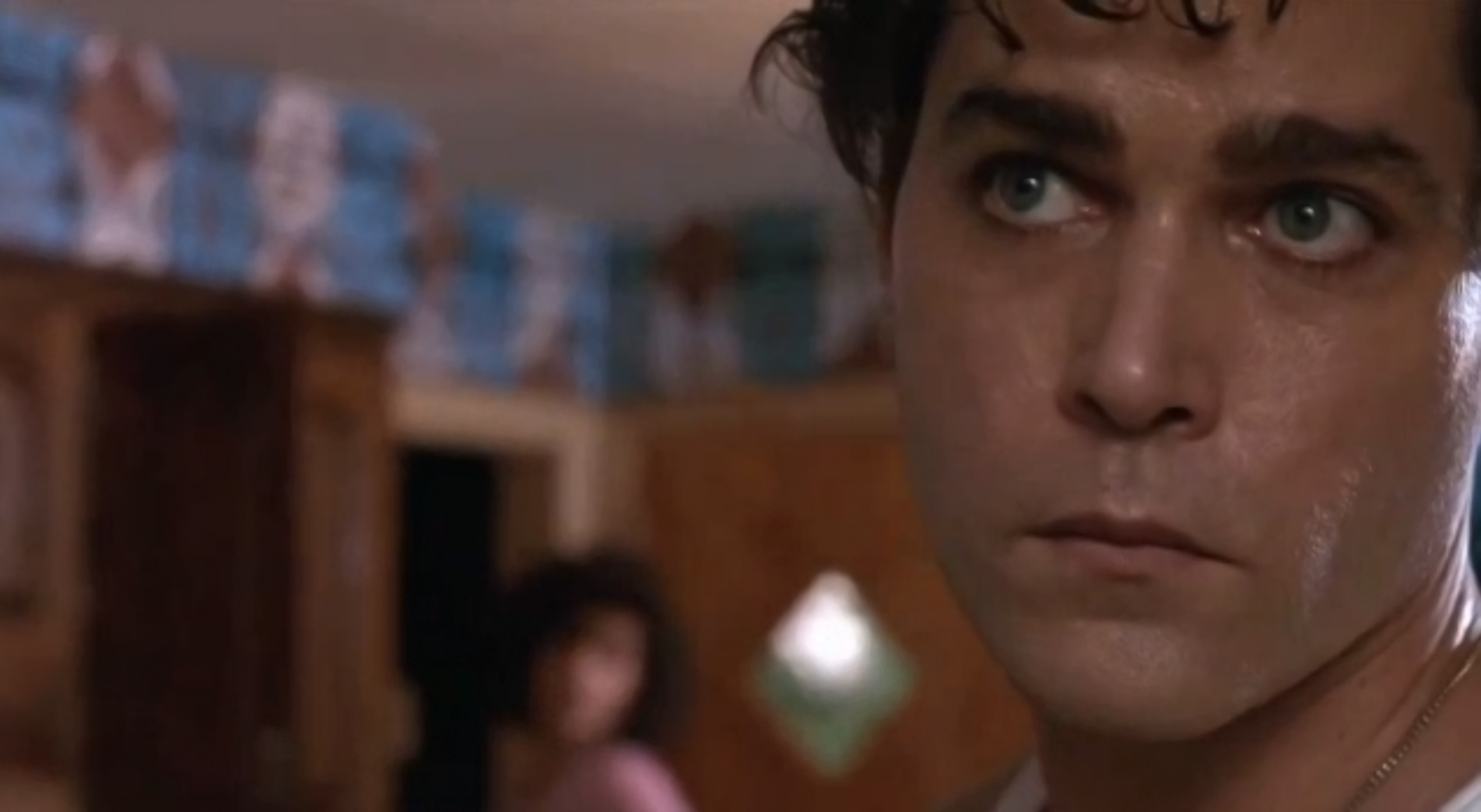 The cinema also was located across the street from The Squire Lounge, a sleazy strip club and notorious mob hangout. (The original owner was a member of the Patriarca crime family who got whacked by Johnny Martarano at the behest of Whitey Bulger back in 1976.) On Sunday family movie days in my youth, we’d drive by and my dad would jokingly have my sisters and I count the number of Cadillacs parked at The Squire. Took me a few years to figure out why that was so funny.

Those Cadillacs had all made the trip across the street for GoodFellas, and it was shortly after we took our seats that my friends and I quickly figured out we were probably the only guys in attendance who weren’t connected. When Robert De Niro’s name appeared in the opening titles, the crowd burst into applause and a voice from the back bellowed “THAT’S ITALIAN!” This followed for every name that ended with a vowel, of which you probably recall there are more than a few.

Two minutes later, when a frothing Joe Pesci repeatedly plunged his mom’s kitchen knife into the whimpering Billy Batts, then De Niro sauntered over and began firing shots into the corpse, the audience was stunned into silence. For about two seconds. Then someone once again yelled “THAT’S ITALIAN” and the applause resumed.

Aside from a thunderous ovation when Henry pistol-whipped that doofus who’d tried to rape Karen, I don’t recall specific other outbursts, but that might just be because I was so lost in the film. Those two-and-a-half hours flew by like 15 minutes, and when I got home that night I could barely sleep. GoodFellas is one of the great sustained acts of virtuosity in American cinema, and the artistry is so in-your-face and swaggering that even a 15-year-old kid who only knew what he was talking about half the time could see the man behind the curtain working the levers, and that made it all the more thrilling. I still point to that moment when De Niro is staring at Morrie, smoking a cigarette in slow motion to the opening riff of “Sunshine Of Your Love” as when I finally understood what it meant for a movie to be directed.

GoodFellas played for over a year at that theatre in Revere. I went back to watch it again nine more times, and thanks to countless home video viewings, I’m sure I’ve seen it more often than any other film – to this day quoting the dialogue with my friends like we’re singing along with our favorite album. But nothing has ever compared to opening night, 25 years ago. It’s the high I’ve been chasing at the movies ever since.