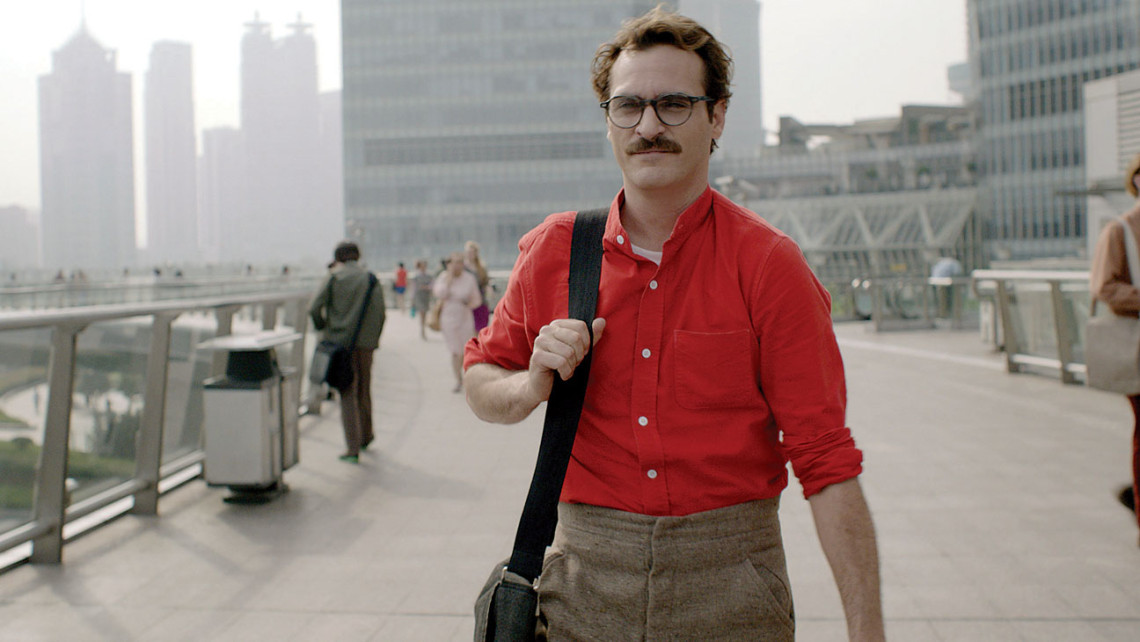 The return of something thought long gone in men’s fashion has resurfaced thanks to the work of costume designer Casey Storm in Spike Jonze’s Her, where star Joaquin Phoenix rocks high-waisted trousers. Something familiar to women as a now-stable trend with everything from skirts to denim shorts and trousers, the costuming choice came as a big surprise to both critics and general audiences – and has since sparked a (sort of) revolution.

Not since Carrie Bradshaw’s Dior Gladiator heels worn in the first Sex and the City film has a wearable item been so hotly discussed and desired among the media and public. Those shoes were arguably the hottest thing of 2008; every fashion-conscious girl who could spend $700 on a pair had them. But more had the endless amount of cheaper varieties available, sending the trend to affordable and global levels. If the craze didn’t further entrench Bradshaw as a (fictional) style icon, it showed the impact of how one costume choice could influence consumers to be on-trend – regardless of whether they were conscious of fashion or not. Sex and the City costume designer Patricia Field’s genius would never be questioned again.

Less than six years later, it’s happened once more – but with a level of uncertainty. Phoenix was said to have questioned his character’s wardrobe, but put his faith in Storm and Jonze. Storm himself said later that high-waisted pants were men’s “last frontier of fashion”. The daring choice to bring them back is perhaps a long time coming, according to an article from Esquire. And men of all sorts are now able to test that theory for themselves with last week’s release of the Her collection, a collaboration between Storm and retailer Opening Ceremony. Those pants, and other items inspired by the film, have hit stores on the back of good reception from reports in publications like The Hollywood Reporter and Time. For a considerable amount, men can now look like Frank Sinatra, Fred Astaire and Humphrey Bogart from the 1950s and 60s.

Though Opening Ceremony are repeat offenders with bringing a film’s fashion into the mainstream – only last year they worked with costume designer Heidi Bivens to create a Spring Breakers line inspired by the racy film, capitalising on current bright and weird trends. Other companies have also been inclined to market a clothing line in tune with recent releases – as The Week points out, H&M released a Dragon Tattoo line, and the Banana Republic a selection inspired by TV’s Mad Men. With our must-have world, it’s an obvious move. But it’s worth pointing out that this has escalated only since those Diors made their mark.

Before now, fashion in film has predominantly been a domain centering on women, with the odd exception including white suits via Saturday Night Fever‘s John Travolta. Teen films have often relied on fashion as a major plot point for a protagonist’s change (Never Been Kissed, Mean Girls) or as a defining element inadvertently hoping to influence its audience (Clueless). In the last decade that has shifted to more adult-friendly films like The Devil Wears Prada and Sex and the City, while fashion-conscious drama has also transcended to the TV medium with the likes of Mad Men, The Carrie Diaries and Gossip Girl. These shows have influenced both women and men as viewers subconsciously come to know what’s hot or not.

Women have been drawn to characters for the clothes they wear, but now it’s the men who are in the spotlight. And so they should be – fashion is for everyone. It doesn’t have to be exclusive or expensive, just comfortable. And if high-waisted pants are comfortable for men, then there should be no question of the return of something that was once a hot-ticket item. The line of film influencing fashion has been well and truly crossed, and with no turning back it’s time to look forward – to the past, present and future, as we know now that fashion has no bounds.