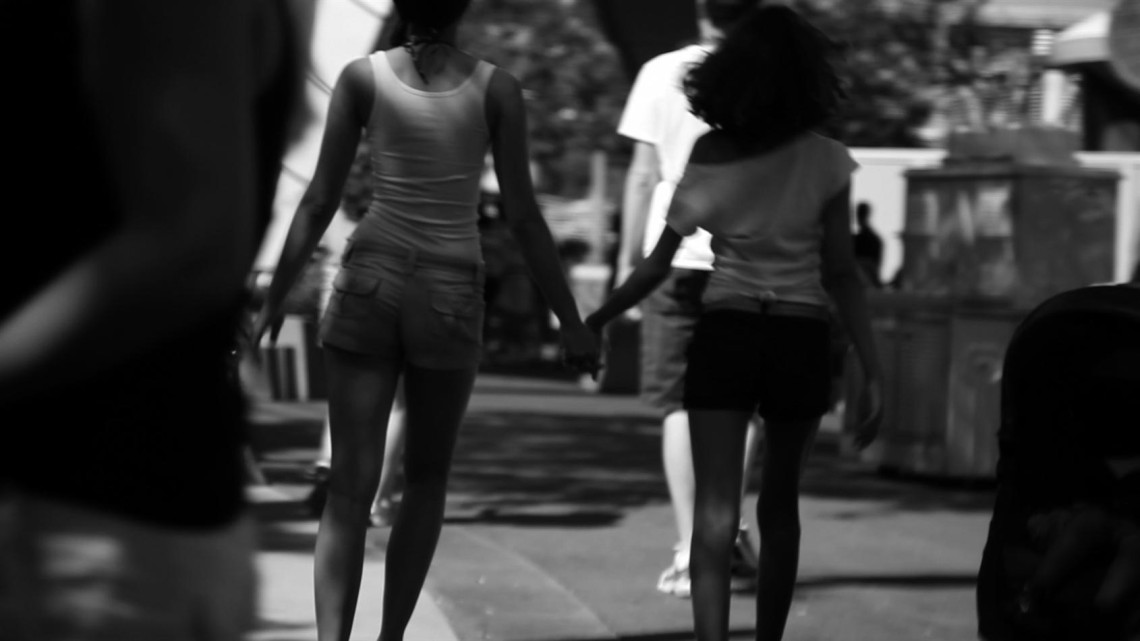 Jim White is your average, middle-aged American white guy. And like a lot of average, middle-aged American white guys, he’s just lost his job. Jim (Roy Abramsohn) happens to be on vacation with his family at The Magic Kingdom when he receives the news, and rather than worry his nagging wife Emily (Elena Schuber), he whisks her and the kids off for one final, magical day at The Happiest Place on Earth.

Shot covertly in both Disneyland and Disney World, first-time director Randy Moore’s Escape From Tomorrow was made with portable, low-light handheld cameras, and a whole lot of hutzpah. Unfortunately, that film exists at all is its most notable quality. The experience of actually watching Moore’s amateurish debut is one of intense boredom, punctuated alternatively by embarrassment and disgust.

Throughout the course of the day, Jim begins losing his mind. The angelic, multicultural faces in “It’s A Small World” morph into gruesome horrors, mocking Jim’s fragile mental state. He begins to hallucinate in front of his wife and kids, and he becomes increasingly obsessed with two teenage girls he keeps seeing around the park. It isn’t long before wholesome, Disney-sanctioned family fun is twisted and perverted into something darker, seedier and more carnal.

Moore has the spark of a good idea here. Disney’s sanitized fairy tales have dealt with their fair share of unsavory topics (rape, murder, slavery, pedophilia and necrophilia, just to name a few), any one of which could be a good launching point for a post-modern horror story set among costumed characters and mythic lands. There’s something to be said, too, about a Disney-monopolized childhood, one which is is now three generations strong. But Escape From Tomorrow picks its satiric topics and then quickly drops them, skittering from one half-baked plot point to another with little consideration for narrative cohesion or character continuity.

The single strongest narrative line follows Jim’s infatuation with two French teenagers. They’re walking Lolitas, clad in short shorts and tight tops, sucking on Mickey Mouse-shaped lollipops. Mr. White (note the name) abandons his children, stalking the two underage girls (one of the actresses was 13 at the time of filming) and even going so far as to approach them in the hotel pool. Is this an average white man’s “escape,” fantasizing about pedophiliac rape?

It would be one thing if Jim’s disturbing fantasies were at all symptomatic of a very tired man at the end of his vacation rope, or if any of the other characters offered any comfort or solace for his steadily declining mental health. But Emily is a shrew stereotype, reduced to screaming “Jim! Jim!” all over the park while she drags her ungrateful children behind her. Jim’s perversions, rather than being nixed, are seemingly condoned: he keeps getting what he wants.

And what he wants is incessantly vile. He compares Spaceship Earth (the Epcot dome) to a giant testicle. Once inside the dome (in a surrealist sequence that blatantly disregards its own narrative logic), Jim literally climaxes, spraying a tube of antibiotic ointment all over himself and the walls of the dome, which are, of course, festooned with the bodies of naked women. The film’s gross-out ending wouldn’t be out of place in a teenage sex-and-death comedy. Moore’s bizarre insistence on toilet humor and bodily excretions reveal the film’s truly juvenile sensibilities.

Escape From Tomorrow feels like a teenage diatribe on the corporate evils of Disney, a self-important exercise in obviousness that’s oblivious to its own logical failings. The film’s smug sense of satire where there really is none, coupled with the incompetence of the screenwriting and direction, renders it a joyless experience. Using Disney iconography as little more than window-dressing for a mean-spirited portrait of boorish masculinity, Escape From Tomorrow made me feel like I was trapped in The Magic Kingdom along with Jim White, begging for the nightmare to end.