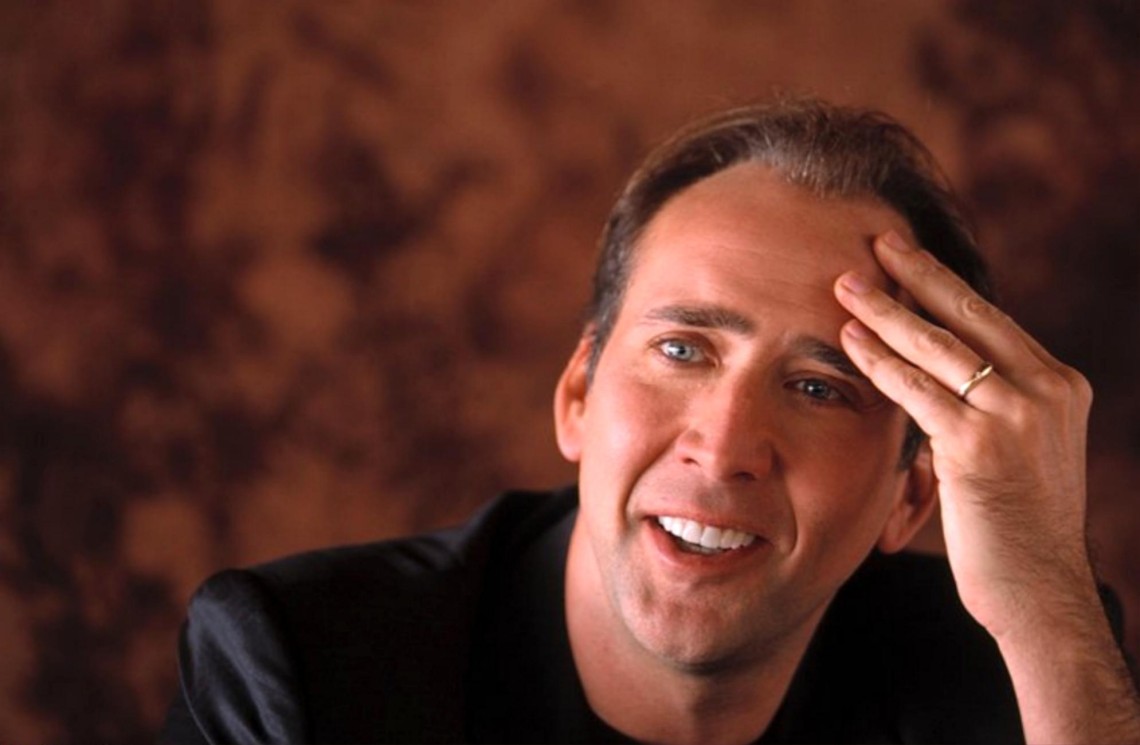 Academy Award-winning actor, star of plenty of great films, star of more crappy films than dozens of actors combined, Internet legend, an endless source of memes… there’s very little that can be said about Mr. Cage that hasn’t already been said. Well, “HOW’D IT GET BURNED?!?!” comes to mind. (Fun fact: Yours truly was in an sold-out audience for The Wicker Man the night that it opened, and it remains one of the only times I’ve seen an audience completely turn against a movie by the end. People were laughing hysterically by the time he punched the woman in the face while wearing a bear suit. But I digress.)

Cage was born Nicolas Kim Coppola, and is the nephew of director Francis Ford Coppola. He changed his name while he was starting out to avoid nepotism and made an early blink-and-you’ll-miss-it appearance in Fast Times at Ridgemont High, putting a sign on another student’s back. Valley Girl was his first notable role, and Raising Arizona and Moonstruck brought him to the forefront in 1987. But his first gloriously unhinged performance came in 1989 with Vampire’s Kiss, where scenes like reciting the alphabet and screaming “I’M A VAMPIRE!” over and over became uniquely, gloriously Cageian.

He took a detour with David Lynch in Wild at Heart and starred in the vastly underrated romcom Honeymoon in Vegas, where he parachuted out of a plane in an Elvis costume to win Sarah Jessica Parker’s heart. He won an Oscar in the mid-90’s for playing a man drinking himself to death in Leaving Las Vegas. He starred in three of the all-time great 90’s action films between 1996-97 (Con Air, Face/Off, The Rock) He played a paramedic in one of Scorsese’s more underrated films, Bringing Out The Dead. And that was just the 90’s.

Cage had a lot of well-known films in the past decade (Matchstick Men, Adaptation, National Treasure), but he really shined in some of the movies that got less attention. He gave two top-tier dramatic performances in 2005: one as an international arms dealer who gets in over his head in Andrew Niccol’s Lord of War, and one as a weatherman whose personal life falls into shambles in Gore Verbinski’s detour film The Weather Man. He channeled his insanity for good in Werner Herzog’s remake-in-name-only of Bad Lieutenant, the one where he had a stare-down with an iguana and smoked crack with Xzibit. And he started the 2010’s with one of the better fun-bad movies in some time, Drive Angry, where he played an undead man on the run from the Devil and that was somehow the least insane part.

Cage has three films set for release in 2014: Tokarev, Left Behind and Outcast. Hopefully some are good and some provide the fodder needed for the Internet for years to come.