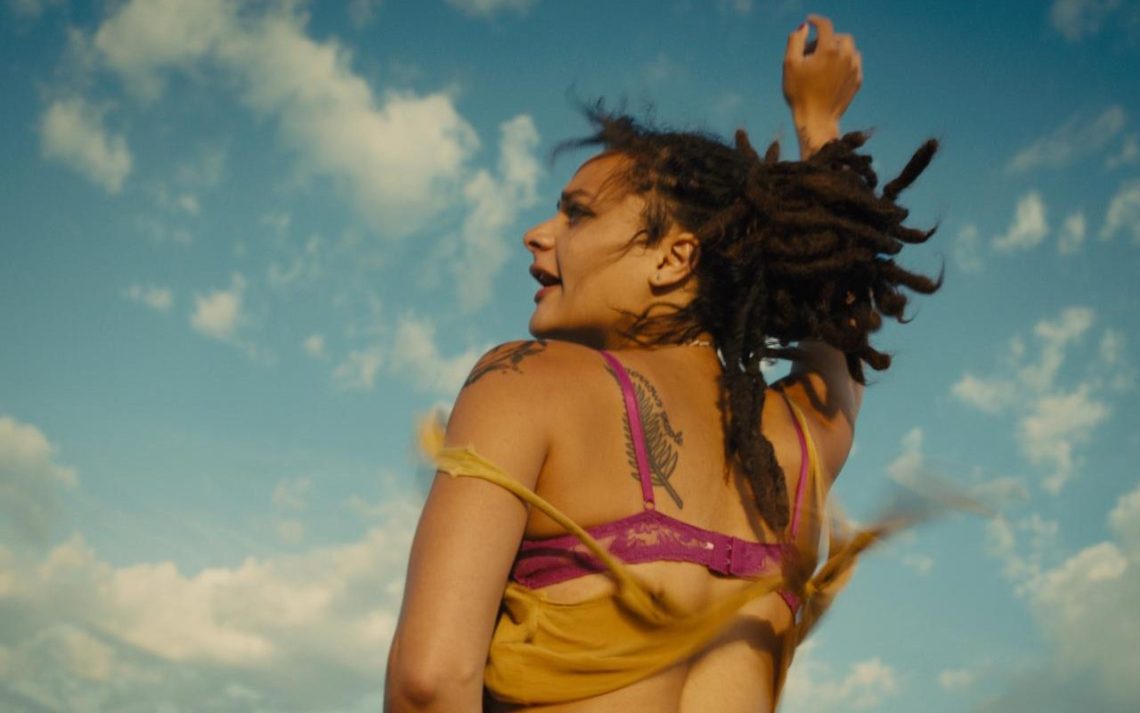 The Power of Cinema Through Music: On The Films of Andrea Arnold

Nathanael Hood writes about the use of music in the films of Andrea Arnold, including her latest, "American Honey."

The group of misfits and rejects form a circle in the hotel parking lot. From the van stereo come the sounds of dreamy synthesizer and thudding bass.

The circle gets tighter, the group rocking back and forth as the call-and-response swells.

Among them stands Star (Sasha Lane), an 18-year-old who abandoned her old life in an abusive relationship to join this nomadic magazine sales crew. Introductions had been made when she first climbed aboard their bus, but these perfunctory greetings did little to reduce the distance between them and the newcomer. Now, though, here in this parking lot, she experiences a musical communion, an aural baptism into their crew.

As the chorus to E-40’s “Choices (Yup)” kicks in, their road boss Krystal (Riley Keough) rallies them together for another day of door-to-door selling.

Months later, the crew joins in another sing-along—but having picked up a host of new members in the meantime, the crew is now much different. Star, no longer the bright-eyed newbie of the bunch, has lived and loved and lost enough to fill a lifetime. The friends who had become like kin are strangers again, unknowable and enigmatic. But as the plucking of acoustic guitars and the swaying croon of Lady Antebellum’s “American Honey” fills the van, their voices come together as one.

“She grew up on a side of the road

Where the church bells ring and strong love grows

She grew up good

She grew up slow

And suddenly the losses and mistakes of youth vanish as Star disappears once more into her new family.

These two scenes bookend Andrea Arnold’s latest feature, American Honey, a sprawling road movie set on the highways, backstreets, and white-trash ghettos of America. Even for a director who shocked the world with social-realist masterpieces like her Oscar-winning 2003 short film Wasp and Fish Tank (2009), American Honey is an especially astonishing and revelatory examination of youth and First World poverty. Much of this can be attributed to her unique, idiosyncratic use of music. For Arnold—as for Jacques Tati and Glauber Rocha before her—sound and music are just as important as her images, contextualizing and commenting on the action, examining and emoting feelings the characters cannot. Her methods can be chiefly summarized in three ways. 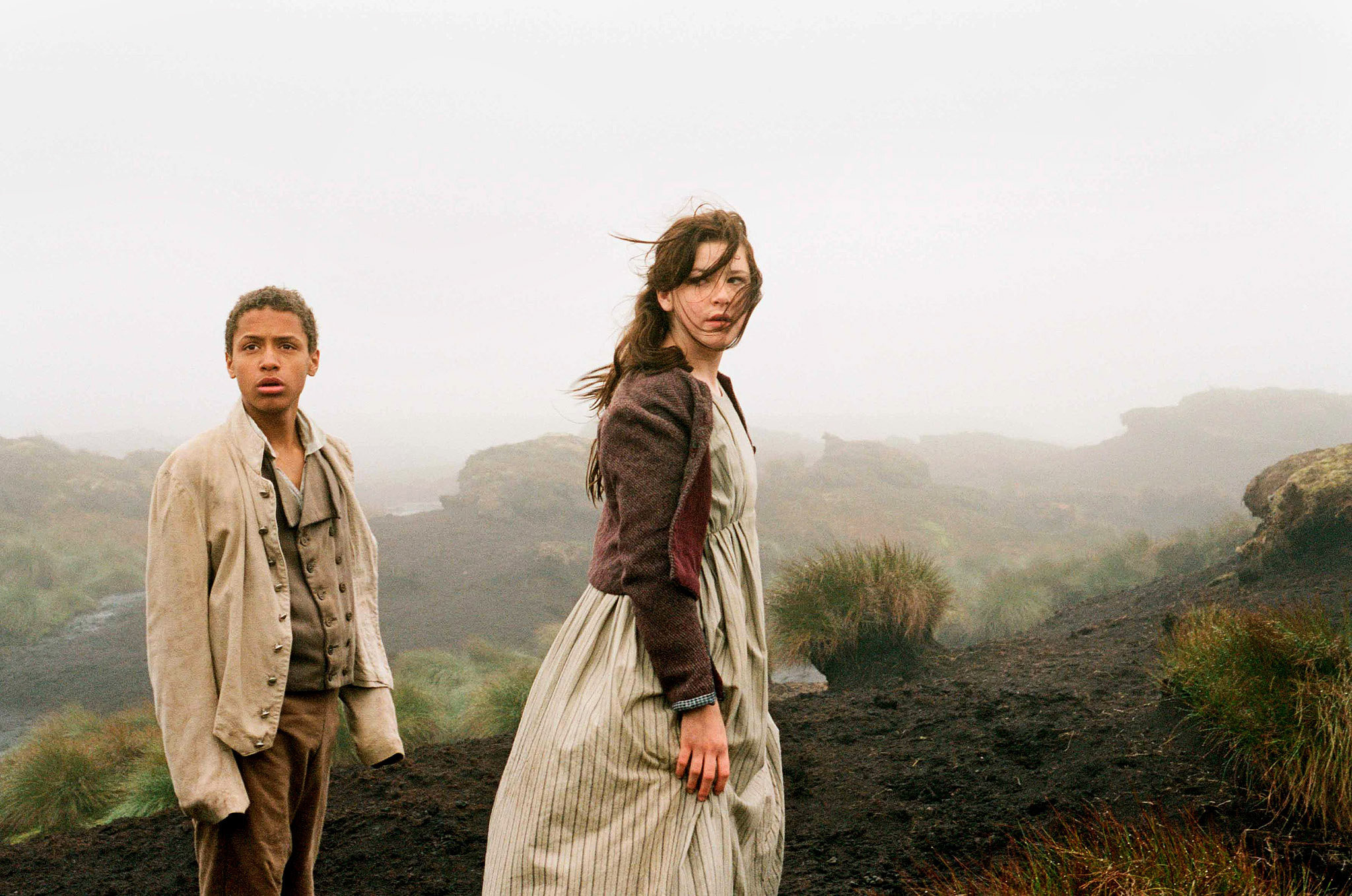 With the exception of her first two short films Milk (1998) and Dog (2001)—both of which feature blasé, forgettable incidental music ranging from tinkling piano to new-age trance—and her 2006 feature Red Road, her soundtracks are almost exclusively diegetic. Much like Quentin Tarantino, she picks and chooses established songs to populate her films. But whereas Tarantino will transplant James Brown and 2pac into 1850s Mississippi, all of Arnold’s songs come from their natural environments. (The one exception being the bizarrely out-of-place Mumford & Sons song “The Enemy” which plays over the credits to Wuthering Heights (2011). In addition to violating Arnold’s musical diegeticism, it’s one of the only surrenders to mawkish over-sentimentality in her filmography.) Even if you close your eyes, you can get a clear picture of where her films are set just from the music. The 19th-century North Yorkshire countryside of Wuthering Heights (2011) echoes with somber church choirs and mournful ballads. The British pubs leak dance-pop and sing-along rock anthems, the American bars syrupy country and thumping country and western. The working-class homes of Fish Tank bleed house music and drum and bass electronica, the towering Scottish apartment complexes of Red Road raucous rock ’n’ roll.

But Arnold seems to have a particular fondness for using hip-hop. Again and again in her films, hip-hop represents imagined or idealized identities, especially ones centered on success and wealth. The magazine sales crew in American Honey wile away long hours on the road and use hip-hop to rile themselves up as they enter rich neighborhoods. Consider one scene where they blast Rae Sremmurd’s “No Type” as they cruise the picturesque, manicured lawns of one such community in Nebraska while looking for marks:

Push start the whip, brought it straight to life

Blowin’ on the kush, ’til I’m out of sight

I don’t check the price, all I do is swipe”

The young teenage girls in Fish Tank spend their days practicing hip-hop dance, singing and swaying along to sultry ballads like Cassie’s “Me & U.” The protagonist, 15-year-old Mia Williams (Katie Jarvis), also practices hip-hop dancing. But tellingly, her secret sessions are done not to the glitzy new school acts that captivate her friends and family like Ja Rule and Ashanti, but to old-school acts like Eric B. & Rakim and Gang Starr. In this way, she not only rejects her white working-class roots for an imagined identity of upper class Afro-affluence, but also modern hip-hop for an era of rap considered by many experts (read: snobs) as being more authentic or “real.” 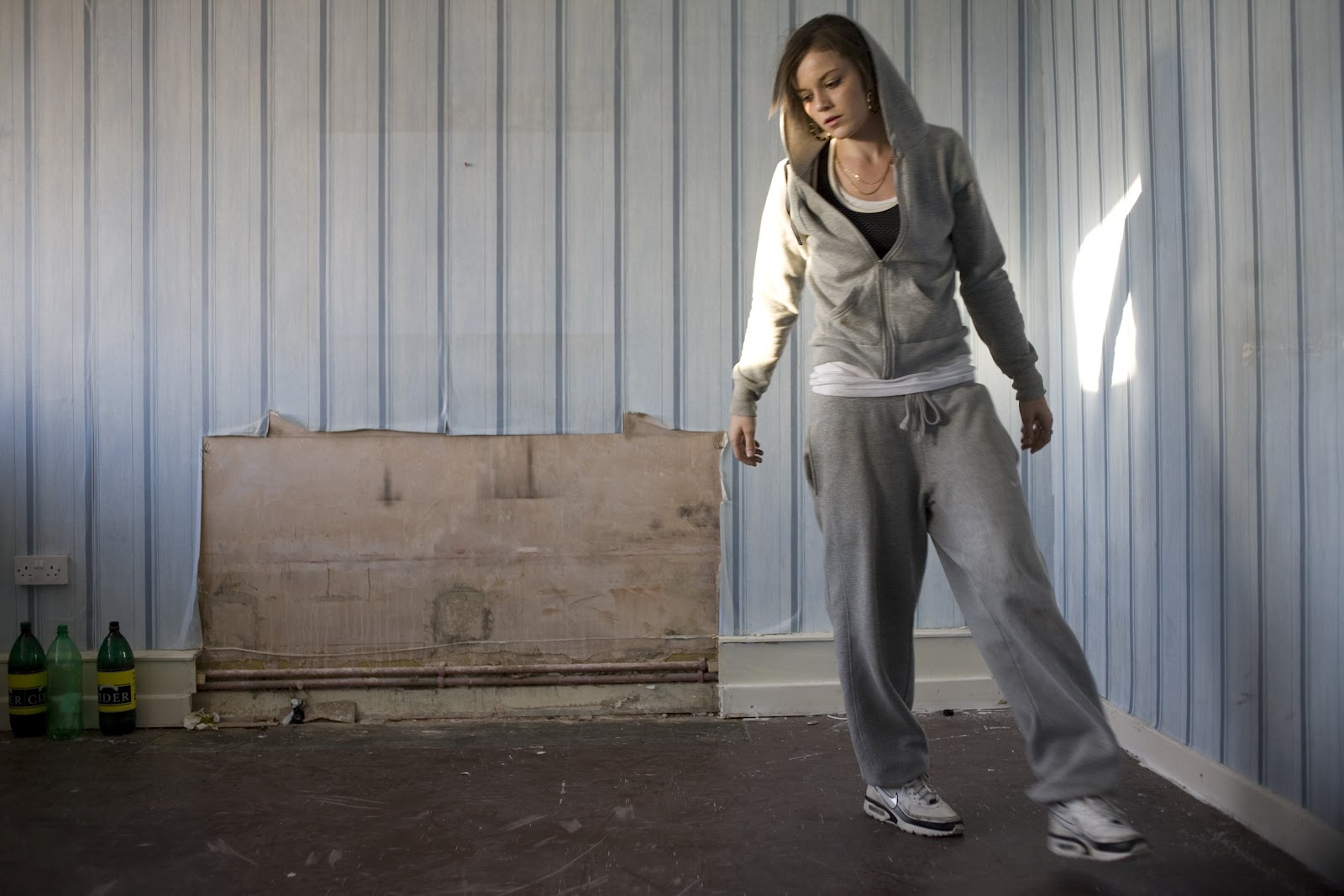 Frequently Arnold uses songs as Greek choruses which comment on the action. But instead of simply narrating what’s onscreen, they provide ironic, almost sarcastic insights to the film’s goings-on. In the opening scenes of Fish Tank when Mia first returns home, she gets into a screaming match with her mother Joanne (Kierston Wareing). As they scream back and forth, Steel Pulse’s “Your House” bounces in the background:

“I wanna live in your house

I wanna live in your house

You say dry your tears don’t

Wipe that tear drops from your eyes”

Later when Joanne’s boyfriend (and Mia’s eventual lover) Conor (Michael Fassbender) takes them on a ride through the desolate industrial countryside, they listen to Bobby Womack’s cover of “California Dreamin’”:

“I’d be safe and warm

If I was in LA

On such a winter’s day”

But one of the best examples comes from American Honey. Star’s induction into the magazine crew comes about after she falls for the rugged Jake (Shia LaBeouf), especially after dances to Rihanna’s “We Found Love” on top of a checkout counter in a supermarket. Later, the song plays again as Krystal drops the female sales-crew members off in front of a group of midwest oil drillers. As they dance to Rihanna’s song of unexpected love, the drillers promptly mistake the girls as prostitutes. Whereas the song first illuminated a blossoming romance, here it ironically counterpoints a shocking objectification and commoditization of Star as a sexual object.

It would be one thing if these songs were non-diegetic like any number of the groan-worthy classic radio singles plastered all over David Ayer’s Suicide Squad. But the fact that they originate within the films themselves can make them seem either eerily prophetic or too on-the-nose. The aforementioned “Your House” scene from Fish Tank was a refinement of a similar one from Arnold’s earlier short film Dog. It also opens with a young teenager arguing with their mother in an apartment—but this time the song that plays is Bobby McFerrin’s “Don’t Worry, Be Happy.”

The one time Arnold never utilizes music is during sex scenes, which feature in all of her films save Dog and Wasp (and even those two shorts feature scenes of heavy petting and making-out). But they are noticeably silent: the graphic cunnilingus and sex scene between CCTV operator Jackie Morrison (Kate Dickie) and released prisoner Clyde Henderson (Tony Curran) in Red Road; Mia spying on Joanne and Conor and later having sex with Conor in Fish Tank; Heathcliff (James Howson) watching Hindley (Lee Shaw) and Frances (Amy Wren) Earnshaw rut in the mud in Wuthering Heights; both times Star sleeps with Jake in American Honey. Even in Milk, a film littered with incidental music, the two sex scenes take place in silence. The quiet also extends to moments of extreme non-sexual physical intimacy such as young Heathcliff (Solomon Glave) and young Catherine Earnshaw’s (Shannon Beer) wrestling bout on the moors which awakens forbidden passions between the two of them. For Arnold, these times are sacrosanct, needing no commentary. 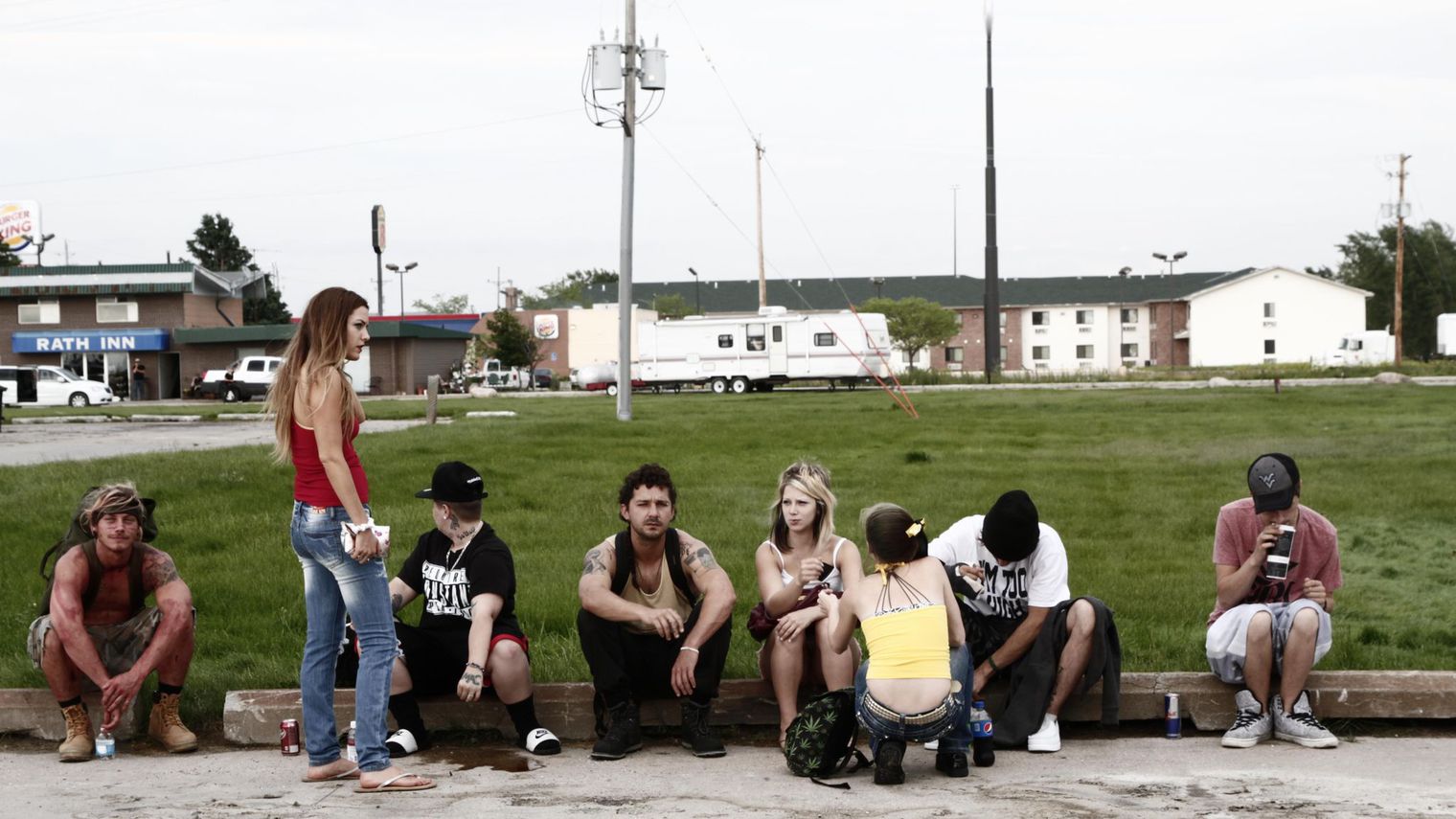 But the most fascinating of aspect of how Arnold uses music comes organically from the plots of the films themselves: when music steps in and expresses the characters’ emotions. Except for Heathcliff—a character she didn’t create—and Jackie—a character invented by Lone Scherfig and Anders Thomas Jensen for the Advance Party film series, a trilogy of films by three different directors containing the same locations and characters—Arnold’s protagonists are never quiet or shy. On the contrary, they are usually loud-mouthed, opinionated, and headstrong. But they all share a strange emotional impotence, seeming either unwilling or incapable to discuss their inner feelings and desires. Though they are quick to make acquaintances, they are hesitant to form deeper bonds with strangers—and this is where music steps in.

In one of the many scenes in American Honey where Star solicits magazine subscriptions, she hitchhikes with a big-rig trucker. The two share a meaningful conversation which takes off when he turns on a radio station playing Bruce Springsteen’s cover of “Dream, Baby, Dream”:

“Come open up your heart

Come on and open up your heart

Come on and open up your heart

The two form a powerful bond during the drive: He discusses his recently married daughter and his dreams of buying a boat, she how she wants a small place of her own with trees and a bunch of kids. It’s one of the most intimate relationships she forms in the entire film. And at the end of their drive, he even buys a couple of subscriptions.

Later, at the film’s climax, Arnold allows herself a rare non-diegetic flourish as Roury’s “God’s Whisper” blares during a scene where the magazine crew dances around a campfire at night. At first it plays from the crew’s van, but it eventually grows to fill the soundtrack itself. As the song defiantly pronounces living life without compromise, living as though God Himself is calling your name, Star symbolically submerges herself in a nearby lake, a literal baptism to match the musical one at the beginning. The music adds an undeniable power to the scene as it manifests her internal anxieties and eliminates them.

But the coup de grace of this technique comes at the end of Fish Tank. After her disastrous fling with Conor, Mia resolves to move to Cardiff, Wales, with a local boy named Billy (Harry Treadaway). As she gathers her things, she encounters Joanne, miserable, heartbroken, and devastated by Conor’s leaving. As she dances to Nas’ “Life’s a Bitch,” she tells Mia to fuck off. As the chorus cuts off before Nas’ immortal verse about optimism in the face of a difficult youth, Mia joins her mom, sashaying from side to side across the living room. Soon Mia’s younger sister Tyler (Rebecca Griffiths) joins in. The three turn, twirl, and step to the music:

I switched my motto; instead of saying ‘Fuck tomorrow!’

That buck that bought a bottle could’ve struck the lotto”

And for a split second, right before the screen cuts to Mia outside the apartment leaving for her new life, we see Joanne smile. A single song served as the apology neither could make and the reconciliation they both desperately needed. It’s a seemingly impossible moment that Arnold is able to magically conjure through the power of cinema.