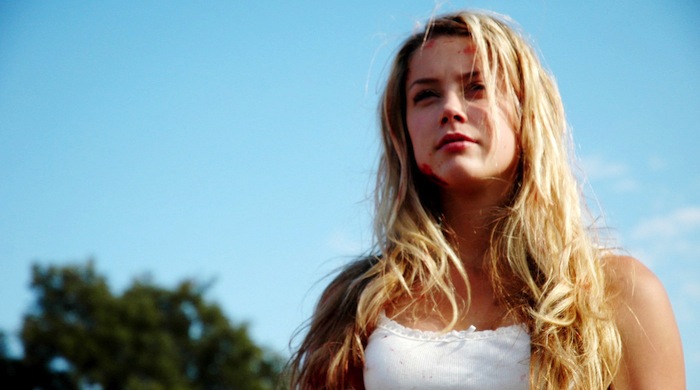 After almost a decade of getting hot-potatoed through studio backrooms, All the Boys Love Mandy Lane is finally hitting theaters. The film was a hit with horror fans during its festival run back in 2006, but it then fell prey to the fickleness of the Weinsteins. Anyone who’s been eagerly anticipating the movie for all these years is likely to be disappointed–I’m not sure anything could live up to seven years’ worth of hype, but even so, Mandy Lane isn’t overly impressive.

The title character, played by Amber Heard, is indeed loved by all the boys at her high school, and some of the girls, too. She maintains a guarded separation from most social circles, but the boys keep circling, allured by her beauty and near-legendary virginity. She finally gives in to one guy’s invitation, agreeing to spend a weekend at his ranch with some friends. Once there, though, the group is soon picked off one-by-one by a stalking killer, and while various adolescent horndogs try to put the moves on Mandy, anyone who ventures out alone is quickly dispatched.

Bafflingly, the characters are completely oblivious to the presence of the killer until close to the end of the film, meaning that there is very little momentum despite all the carnage. This is part of the point, since that time is used to focus on the various boys and their feckless, boorish attempts to woo Mandy. The suggestion is that uncontrolled hormonal obsession is just as scary as a masked man with a machete. This idea is underlined by the opening scene, in which one young man’s idiotic stunt to impress Mandy goes horrifically awry. But while that’s smart enough, it doesn’t make for terribly scary or compelling viewing.

The film’s exploration of gender politics includes the “sluts die, pure girls live” cliche of horror films, but that’s not driven home fully until the big twist at the end. Mandy is contrasted against two “dirty girl” characters with a wink and a nudge at every turn, but any intended satire is indistinguishable if one isn’t in the know. Offing young people with academic self-awareness isn’t much better than offing young people for cheap thrills. It’s not at all surprising to learn that Mandy Lane originated as director Jonathan Levine’s thesis project in film school. Its whole approach to dissecting horror tropes feels very amateurish, and Levine has since gone on to direct much more interesting stuff.

The movie’s subversion of the “virgin” horror film archetype unintentionally perpetuates another unfortunate idea. The twist is that the killer in the woods is actually acting on Mandy’s whim, as part of a suicide pact. He is, it turns out, just another boy looking to win her heart. But in the end, she decides not to go along with the endgame, kills him, and then escapes with the other sole survivor of the ranch, who has no idea of her involvement. So rather than just being a story about a girl enduring the unwanted solicitations of oppressively invasive testosterone (which has a basis in truth), it’s a story about a wily siren destroying unwitting menfolk and sluts with her charms (which feels more like the howl of every “nice guy” who didn’t get sex for performing a helpful deed). That kind of wrecks the movie’s intellectual conceit.

All the Boys Love Mandy Lane is nicely put together. It surveys the Texas plains through a very grainy filter, like Terrence Malick by way of the grindhouse. It also acts as an interesting capsule of a time before a lot of the people involved, particularly Levine, went on to bigger and better things. The film’s ambitions are respectable, but it unfortunately doesn’t live up to them.