On The Rhythms of Sorkinese

In Steve Jobs, director Danny Boyle’s most overt visual showcase is relegated to the film’s transitions. Set backstage at three different tech product launches, the film makes two major leaps forward in time between 1984 and 1988 and again between 1988 and 1998, and it’s when Boyle contextualizes the drama for the next act that his kinetic visual style takes center stage. Overlaying cut-up news footage over frenzied color schemes, Boyle saturates the viewer with information necessary to understand the next part of the narrative, but does it with his distinctive manic energy that’s akin to a preschooler in the depths of a sugar bender. These transitional modes offer the only moments that Steve Jobs breathes like a Danny Boyle film.

Otherwise, it’s an Aaron Sorkin film—and the loquacious scribe’s trademark breakneck dialogue drives the film’s action as well as Boyle’s camera. With arguably his most logorrheic script to date, Sorkin all but forces Boyle to adopt a clarity-over-everything directorial approach, following the various conversations and arguments between Steve Jobs (Michael Fassbender) and the various co-workers, friends, and enemies who are all conveniently backstage to hash out their issues right before Jobs announces each of his new ideas to the world. Boyle inevitably has to play second fiddle to Sorkin because his dialogue hogs the frame literally from the moment the opening credits come to a close. 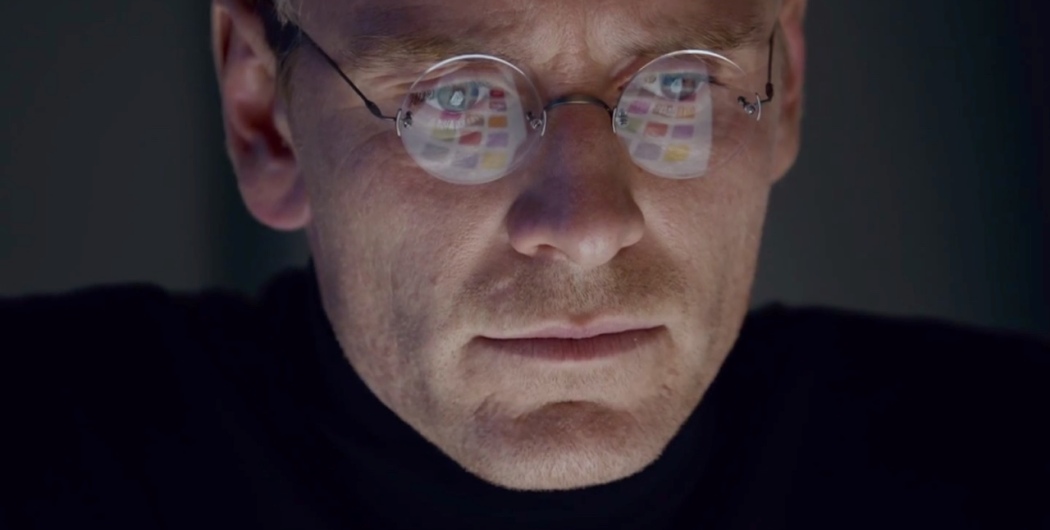 There are very few modern screenwriters who can lay claim to auteur status over a director and—for better or worse—one of them is Sorkin. The Oscar-winning writer has worked with many accomplished directors in both film and television. But David Fincher, whose dark digital palette defined The Social Network as much as Sorkin’s phenomenal script, is the only exception of collaboration; all other directors ostensibly served an ancillary role, and bowed to his verbose scripts. Veteran TV director Thomas Schlamme’s characteristic walk-and-talk technique literally moves Sorkin’s script. Rob Reiner, not a flashy stylist by any means, all but leaves the camera running so that actors like Tom Cruise and Michael Douglas can spout Sorkin’s monologues in A Few Good Men and The American President, respectively. Even in Moneyball, Sorkin’s most relaxed script—perhaps in part because it was co-written by Steve Zaillan—director Bennett Miller’s classical style savors the zesty strategy sessions between Billy Beane (Brad Pitt) and Peter Brand (Jonah Hill), like when the two negotiate the trade for Ricardo Rincon in the film’s best scene, over the actual sport of baseball.

But despite claims to the contrary from Sorkin’s many vocal detractors, his authorship isn’t rooted in the actual content of his words. Sure, Sorkin’s scripts feature Great Men who overcome Great Odds to achieve Greatness, and his limousine-liberal politics are consistent across his entire body of work. But his authorial stamp is almost entirely rooted in rhythm, specifically the theatrical-mixed-with-classic-screwball cadence of his dialogue. Even in his best monologues—Jessup’s day in court, Dr. Jed Hill’s violation of the Second Commandment, Gust Avrakotos’ declaration of patriotism, and Mark Zuckerberg’s minimally-attentive response to a condescending question—have less to do with what’s being said than how it’s aphoristically designed to be said.

Sorkin’s writing has never hid from its most obvious influences. There’s Wilder’s witticism, Mamet’s speed, and Chayefsky’s righteousness, but Sorkinese is the zesty-but-deadly cocktail of these forbearers rather than their direct descendant. It’s a style that’s simultaneously confident and self-conscious, both as speech and text. His dialogue is heightened beyond all scope of reality, tripping over itself with its repetitive tics and circular structure, but still asks the audience to take it as seriously as kitchen sink realism. It occasionally traffics in subtlety, but mostly engages in maximalist bombardment, daring you to be impressed, roll your eyes, or exhaustingly succumb to it.

There are undeniably plenty of weaknesses to this approach. As any regular viewer of Studio 60 On The Sunset Strip and The Newsroom can attest, Sorkinese at its worst renders every character on screen the same model mouthpiece, spouting smug, condescending ideas that aren’t nearly as clever as those characters think they are. But it’s also easy to forget that Sorkinese at its best has a delightfully intoxicating quality that can facilitate well-timed jokes, genuinely clever lines, and even the nicely-articulated concept to boot, i.e. from Steve Jobs: “I guarantee whoever said, ‘The customer is always right,’ was a customer.” When Sorkin gets on a roll, the pleasure doesn’t come solely from following the dialogue, but letting it wash over you as accomplished actors engage with established beats while poking their personalities through at the same time.

In Steve Jobs, Sorkin takes his writerly impulses and cranks them up to eleven. He uses a baldly theatrical construct that allows for heightened emotional tension and stacks about five or six separate subplots that somehow coherently zip past each other at Mach 5 speed. Although occasionally draining and corny, the reason why Steve Jobs mostly works is because Sorkin understands and indulges in the fantastical nature of his writing. Steve Jobs exists in an alternate reality where the crucial strands of Jobs’ personal and professional life all come to a head thirty minutes before an important product launch on three separate occasions. It’s a film that can have Steve Jobs successively struggle with his team to get his brand new Macintosh to say, “Hello,” denounce his paternity of a child that’s clearly his own, and discuss his own experiences as an orphan with his CEO. Sorkin’s triptych screenplay has obvious debts to the actual history, but has no interest in conforming to it, and its fidelity lies within Good Drama rather than Objective Truth. It’s as if Sorkin finally realized that the way to have his cake and it eat it too is to flatten a screen until it becomes a stage, a bad idea in the hands of almost anyone else, but with him it’s almost a relief. 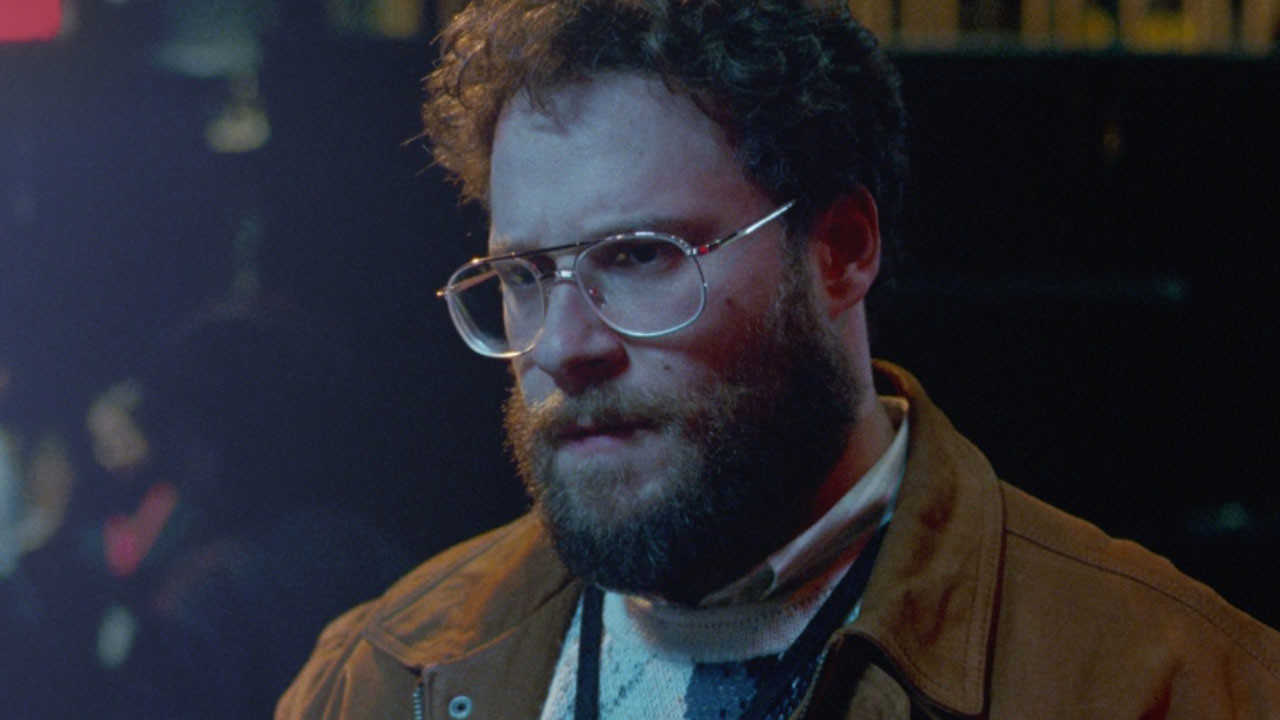 Ironically, it’s also Sorkin’s rapid-fire rhythm that ultimately holds Steve Jobs back from greatness. The film is ostensibly about a cruel, unforgiving man using his gift for technology to communicate decency to the world, but Sorkin moves at such a clip that the humanity at its heart only comes through in bits and pieces. In fact, between all the shouting matches and witty banter, there isn’t much time for anything else but catching your breath. Incidentally, it’s also why the most compelling part of the film isn’t Jobs’ friendly-turned-sour-turned-mellow corporate relationship with CEO John Sculley (Jeff Daniels), or his close, platonic relationship with marketing director Joanna Hoffman (Kate Winslet)—but his friendship with co-founder of Apple Inc. Steve Wozniak (Seth Rogen), whose mission throughout is to get Jobs to publicly acknowledge the work done by his co-workers on the Apple II, a simple act of decency that would mean nothing to Jobs but everything to his peers. “Acknowledge that something good happened when you weren’t in the room,” Wozniak pleads with Jobs. Grounded in emotionally simple terms, the subplot produces some of the most potent, moving scenes in the film, including the final scene between the two where Wozniak all but demands Jobs to appeal to his decency and Jobs refuses.

Like all distinctive styles, Sorkinese is understandably polarizing. Its strongest defenders will claim that it’s the most inspiring, thoughtful writing this side of Frank Capra. Its harshest critics will claim that it’s all smart-sounding empty-headed rhetoric that masks retrograde, antiquated beliefs. In reality, Sorkin is just a very talented idealist, someone who writes in Beliefs and Values but who’s also skilled enough to dress them up as drama and analogy, and sometimes one gets in the way of the other. Sorkin is someone who can’t help but be himself, which is why he speaks in a language so dominating that it all but precludes a director from using another tongue.