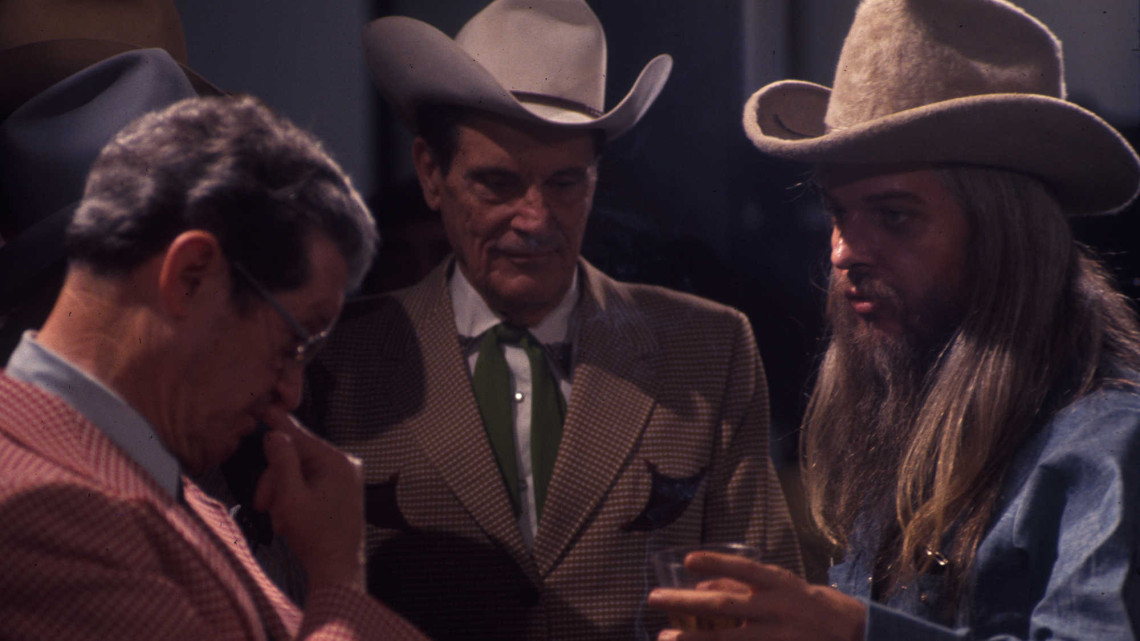 Blank’s Canvas: On “A Poem is a Naked Person”

Partway through My Old Fiddle: A Visit with Tommy Jarrell in the Blue Ridge (1994), Les Blank’s look at the Appalachian fiddling and banjo master whose humble instrument landed itself in the Smithsonian after its owner’s death, we’re treated to a tutorial from Jarrell’s sister on suckering, a process of stripping shoots from plants. That tangent is as good an illustration of Blank’s method as any, whereby a portrait of a highly situated, regional artist compulsively strays from its ostensible subject to bask in the curious textures of the more colorful world around him. Though Blank’s filmography is a treasure trove of such sideways ethnographic insights, jewels seemingly grasped by accident and subsequently rescued from the dustbin of American traditional music history, the touchstone film that puts the others into their proper context might be A Poem Is A Naked Person. Filmed over a long stretch from 1972-1974 and consigned to its own unofficial dustbin until its recent debut at SXSW, the typically strange documentary follows blues musician and sideman Leon Russell in the loosest way possible, gathering the energy of his crackling live performances only to deliberately trace its dissipation into an impressionistic record of the diverse scenes its subject orbits.

Given his attraction to the cultural surroundings that animate his subjects’ lives, which arguably figure larger in his films than the subjects’ actual work, it is all too fitting that Blank was drawn to such an itinerant figure as Russell, whose work inherently takes him into other settings as surely as Blank’s camera does. Though Blank and his team spent much of their time at Russell’s recording studio in Tulsa, Oklahoma, the film he wrangled out of the experience is most vividly realized in the musician’s Nashville performances, which plug him into a throbbing mass of long-haired hippies, as well as the more flee-floating tour of the Oklahoma folk and country scene that comprises the bulk of the running time, as Russell liaises with the likes of Neil Young producer and pianist David Briggs and a mid-career Willie Nelson. As vividly realized as the performances are, they also mark some of Blank’s more conventional material, the aesthetic of alternating artists’ close-ups and blissed out crowd reactions snugly fitting into a tradition of Pennebaker concert films like Monterey Pop (1968), while prefiguring films like Scorsese’s The Last Waltz (1998). Blank’s ethnographic eye is most distinctive when he turns from both the stage and the audience to take in the sweat-soaked Americana of the concert space before the shows, an ugly but throbbing world of bearded dudes and long-haired women in ugly arenas, armed with Coke cups, hot dogs, and good cheer. (“It merges into one beautiful thing,” one concert-goer muses, a little stoned: “Leon is the musician and we are the fans.”)

Predictably, though, it’s the world just outside the expected frame that most appeals to Blank’s digressive nature, and that inspires an ineffably beautiful time capsule of particular places in particular moments. Whether because of Russell’s reticence to grant longer interviews or because Blank saw him more as an entryway into a wider setting than as the proper subject himself, Russell operates here largely as a compelling but aloof cipher, a key that opens doors into other, more interesting rooms. Some of those other settings, like a tableau of a child’s unvarnished outdoor rendition of Three Dog Night’s “Joy to the World” or an interlude that layers Nelson’s recording of “I’m So Lonesome I Could Cry” over images of a lake glistening at sundown, feel like rare moments of grace and stillness amidst the din. Others, like a grotesque recurring motif of a snake devouring a chick, suggest an uglier, more primal country that Russell is just passing through. In both stray paths, we see Blank’s burgeoning editorial sensibility, his penchant for a form of associative montage that depicts a given place by impulsively roaming through it rather than staying anchored to any one home base.

While Blank’s sprawling canvas relative to his shorts makes A Poem Is A Naked Person a solid bedrock for most of his aesthetic and thematic tendencies — an attraction to outsider artists, for one, or a tendency to capture those artists by surveying the under-documented milieus they glide through, from demolition sites to pie-eating contests — it also has its limitations. Blank’s allusive editing is at its punchiest and most evocative when it forges unusual connections in a compressed timeframe and seemingly on a whim, as in the way Gap-Toothed Women (1987) careens from muralists to belly-dancers in its casual flow chart on the titular subject. Blank makes the most of the disparities between Oklahoma, Texas, and Tennessee here, but there’s an occasional sameness to his tangents that’s exacerbated by the protracted running time. Even so, this is a gorgeous and mercurial film, indispensable as a record of the sometimes mundane, sometimes absorbing American lives that don’t just patronize but give rise to its traditional music.