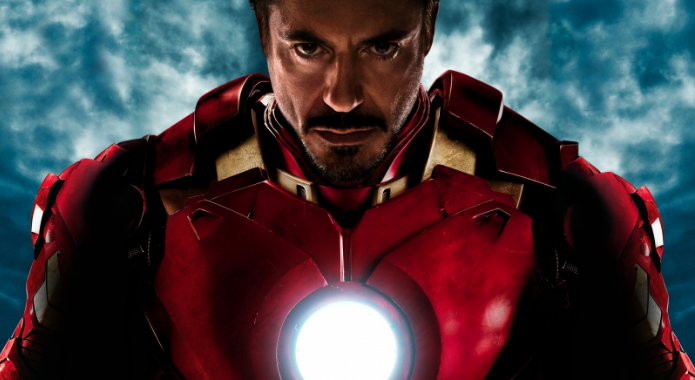 Tony Stark Is a Villain: How the ‘Iron Man’ Films Subvert Traditional Views of the War on Terror

It should go without saying that 9/11 didn’t just change the world, it changed the movies. Over the past decade, no other event has seeped into our cinema more thoroughly, from political thrillers that focus directly on the War on Terror to blockbuster escapism inspired by the overseas conflicts that resulted.

Superhero films are no different. Christopher Nolan’s Batman trilogy deals explicitly with themes of fear, trauma and terrorism, and even the Spider-Man films devote scenes to showing New Yorkers coming together to support their hero in times of crisis. In many ways, the superhero genre is perfect for crystallizing and reflecting the post-9/11 zeitgeist, celebrating the triumph of American individualism over mysterious, fantastic and seemingly-unbeatable forces that seek to sow destruction and chaos.

No superhero brand tackles the War on Terror with as much frequency and arguable nuance as the films of Marvel Studios. The heroes in these movies aren’t just extensions of American militarism, beating up bad guys because, well, they’re bad. While they function as a form of fantasy, allowing audiences to delight in comic-book violence, they also capture the national confusion and self-doubt that set in after the United States was crippled by multiple wars, a stagnant economy, and above all, increasing distrust of those in power.

The Marvel movies aren’t just about good guys defeating bad guys, they’re about good guys trying to figure out just what it means to be good,  and whether the ends really do justify the means. Captain America has to learn how to fight for American ideals without becoming a piece of militarist propaganda. The Incredible Hulk worries that his response to violence might end up hurting the innocents around him. Thor must repent after wrongfully invading another realm. These aren’t the black-and-white superheroes of the Cold War, they’re the broken and morally murky heroes of an age when it’s not always easy to know if American might equals right.

And at the center of it all, there’s Iron Man. The Iron Man movies don’t just touch on the War on Terror allegorically or symbolically; they take place in the caves of the Middle East and the briefing rooms of Washington D.C., as terrorists try to secure the weapons necessary to attack the U.S. and American politicians look for the best way to fight back. Tony Stark himself was intended by Stan Lee to be the personification of everything people might hate about America—its wealth, its arrogance, its militarism. As a result, while, on the surface, the Iron Man films appear to follow the same “rules” as other action movies, they differ in one very subversive way: most of the time, Tony Stark (and by extension, the United States) is more of a villain than a hero.

The very first scene of Iron Man finds American soldiers being blown up by the very weapons that are supposed to protect them. It’s a theme that will be revisited throughout the series: all advanced weaponry will wind up in the hands of our enemies, and there can be no terrorism without the manufacturers of instruments of terror. The Ten Rings terrorize Afghanistan use weapons from Stark Industries. Ivan Vonka uses Tony’s Arc technology to become Whiplash and later collaborates with weapons designer Justin Hammer, killing innocent people at both the Monaco racetrack and Stark Expo. The Mandarin’s bombings are manufactured by Aldrich Killian and carried out by wounded veterans (whom Tony later kills with an army of unmanned drones). 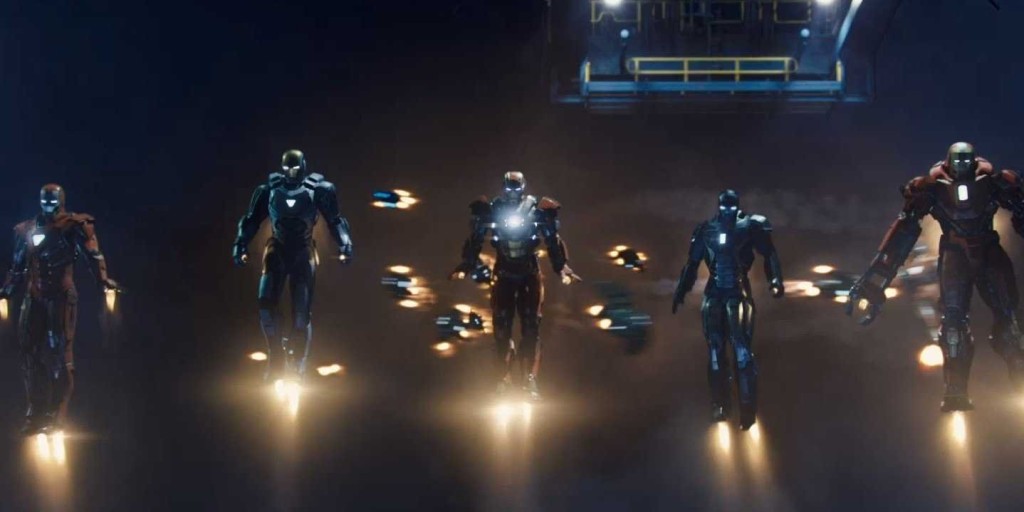 Tony isn’t always directly responsible for the deaths of these victims of terrorism, but he does contribute to the culture of violence and retaliation that leads to their demise. In Iron Man 2 and Iron Man 3, he grapples with the fact that his family tree is firmly rooted in systemic violence and the Stark name a permanent fixture in war. The attacks by Ivan Vanko are “blowback” from the actions of Tony’s father during the Cold War, Killian’s distorted version of Extremis results partially from Tony’s rejection, and Pepper is nearly killed in an attack by The Mandarin after Tony eggs him on. Intentionally or not, Tony Stark has blood on his hands, even after he decides to become Iron Man

One of the main questions raised by the Iron Man films is: Who should control our most powerful weapons? Who can use them responsibly in the War on Terror? The military, Tony, or someone else?

At one point in the original Iron Man, Obadiah Stane says, “These are weapons that will put the balance of power back in our hands, which are the right hands.” He’s referring both to his own individual power and that of the American military, and he’s actually echoing something Tony himself says earlier: “I don’t want this power winding up in the wrong hands. Maybe in mine, it will actually do some good.”

They’re both wrong. The over-arching theme of the Iron Man movies is that there are no “right hands,” and some power is too great to be wielded by anyone, even a superhero. Iron Man ends on a note of hope, that perhaps Tony can overcome his demons enough to use his power responsibly. Iron Man 2 quickly throws that theory out the window.

Many people have claimed that Iron Man 2 is a Republican movie, with some going as far as to say that it was influenced by the philosophy of Atlas Shrugged author Ayn Rand. Specifically, they point to a scene at the beginning of the film in which Tony Stark stands before Congress and argues that he should not be required to give the Iron Man technology to the military. As he puts it, “I’ve successfully privatized world peace.” It’s a moment that’s played for laughs and applause, and it’s easy to see why some might feel Iron Man 2’s central philosophy is one that prioritizes individual achievements and corporate rights over those of the general public. After all, later on in the film, it’s up to Iron Man to stop the drones that were created by Justin Hammer for the military. Tony must have the “right hands,” right? 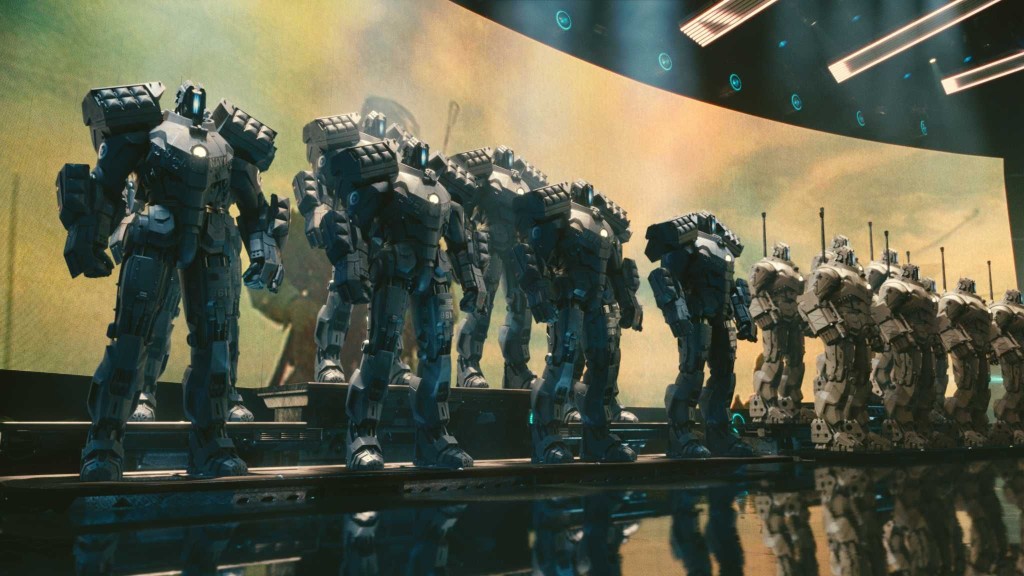 This reading overlooks one important element: The Tony Stark of Iron Man 2 isn’t a hero, he’s an asshole.

He’s a self-obsessed, egotistical dick, just like he was in the first film, but geared up to 11. Rather than using his identity as Iron Man to focus on helping others, Tony uses it to even further solidify his cult of celebrity. He isn’t a superhero who works silently in the shadows for the public good but a guy who’s in it for the fame and the glory. He places most of the responsibility of protecting the world on his own shoulders, and he’s arrogant enough to think he can do it. But he can’t. It’s only by literally reaching out to Rhodey—the military equivalent of Iron Man he until now had rejected—that he’s able to defeat Vanko.

Iron Man 2 is certainly cynical of the government’s relationship with private weapons contractors, but it suggests a middle ground needs to be found between the power of the corporations and that of the state.

Tony Stark Isn’t Much Different from Those Supervillains

“You start out with something pure, something exciting,” Tony says in Iron Man 3. “Then come the mistakes, the compromises.”

He might as well be talking about himself. From the very beginning, one of the main themes of the Iron Man series is that the War on Terror corrupts everything it touches. Tony Stark is no exception.

The original Iron Man rests on the idea that as technology advances, it will be used to create more and more terrible tools of destruction, even if that isn’t the original intent (a theme later revisited in Iron Man 3). Tony Stark creates a miniature Arc reactor to keep himself alive; this later powers a metal suit that allows him to kill his captors. After returning to the United States, he starts developing the Iron Man suit as a hobby in his garage, initially just as a personal flying machine; it gradually becomes a weapon complete with targeting system and rockets. As Obadiah Stane puts it at the end of the film, “In trying to rid the world of weapons, you gave it its best one!” 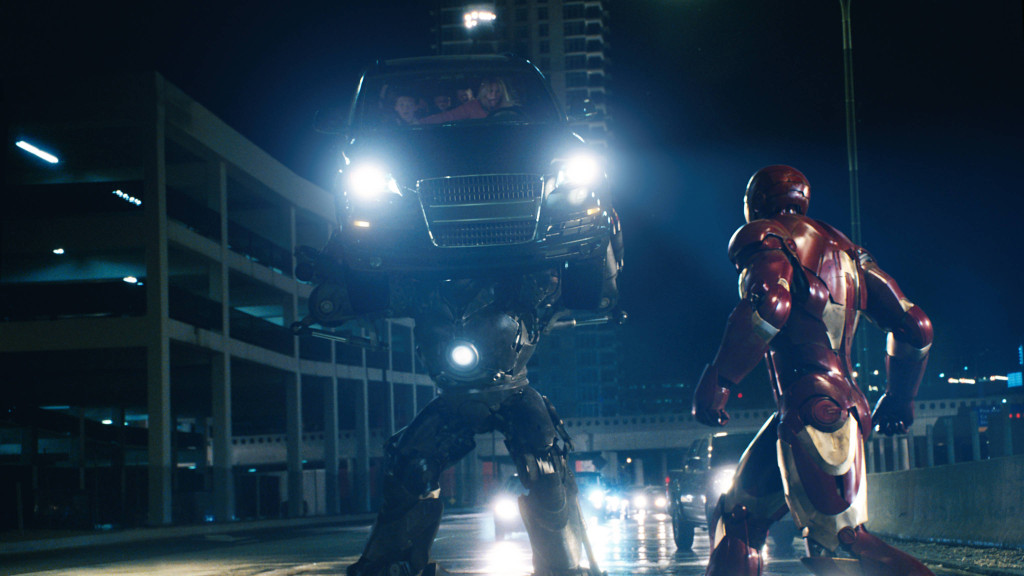 Iron Man 3 ties this paradox into an allegory for post-9/11 trauma. It’s a movie about how America, in its misguided quest for meaning after a devastating terrorist attack, turned to war and violence to try and ease the pain. The Tony Stark of Iron Man 3 is so traumatized by “what happened in New York” in The Avengers that he seeks solace in his garage, creating ever more impressive (and, by extension, destructive) Iron Man prototypes. Meanwhile, veterans wounded in the war turn to Aldrich Killian for help, only to become human bombs. The message is clear: The wars waged in response to terrorism lead only to further militarization and trauma, and nobody is helped, only corrupted.

In fact, both sequels to Iron Man find Tony Stark taking on characteristics of the villains from the previous films. In Iron Man 2, he inherits the Messiah complex of Obadiah Stane, convinced that his methods of handling the Iron Man and Arc technologies are the only ones worth considering. The Iron Man suit becomes both a spiritual and physical contaminant—his heart is literally poisoned the more he uses the armor to pursue his own selfish interests. By the time we get to Iron Man 3, he’s created his own version of Whiplash’s unmanned drones, an army of Iron Man prototypes that can act on their own, plus an experimental set of armor that he can control without being inside it. If the second film was a critique of the Obama administration’s reliance on drone strikes, the third film is a strangely uncritical celebration of it, with Tony deftly using his unmanned suits to take out Killian’s henchmen (who, we shouldn’t forget, are actually wounded veterans).

The Iron Man movies are about a lot of things—the cyclical nature of violence, the proper use of power, institutions as inherently corrupt, the manufacturing of fear, and destructive individualism, to name a few—but the main message is one of peace, and how true peace can only be achieved by putting our weapons aside. Each successive film finds Tony becoming more and more like the villains he faces—his ultimate villain is always himself and his own lust to be the guy in control. It’s only at the end of Iron Man 3 that he truly rejects his philosophy of the first film that the best weapon is the one you only have to fire once, destroying all of his Iron Man suits. He can always rebuild them, but the point is that he is not defined by his armor, any more than America has to be defined by its militarism.

Of course, the Iron Man series’ critique of the War on Terror can only go so far. Like most superhero films, they at times perpetuate a fantasy in which the good guys can stop the bad guys without collateral damage. In the first film, Tony Stark takes out a whole group of terrorists without hurting their innocent hostages. In Iron Man 3, his drone strikes are always accurate. Real life proves this often isn’t possible. Even so, the final moments of Iron Man 3 are surprisingly radical, given that most blockbusters argue that our problems can be solved with more weapons and violence, not less. Maybe it’s time we learned a lesson from Tony Stark and realized that there’s more to being a superhero than having the biggest gun.