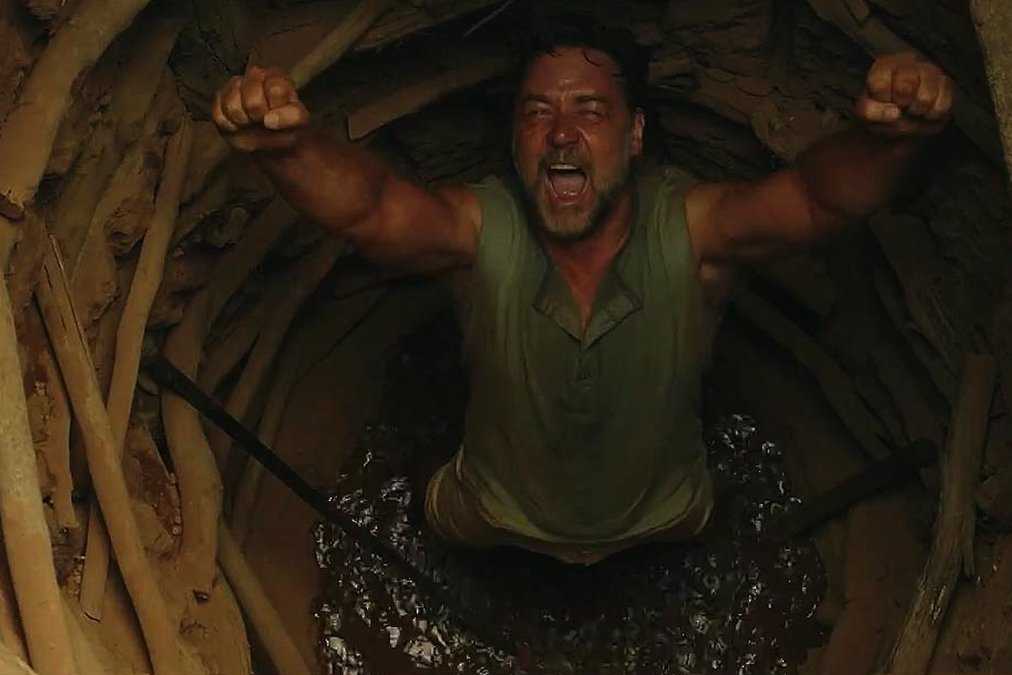 A brawny historical melodrama with a twinge of magic realism amongst the oft-conflicting tones, Russell Crowe’s directorial debut The Water Diviner is an odd-duck curiosity about as commercially minded as that title would lead you to believe. It’s full of rookie mistakes, weird transitions and storytelling choices so all-over-the-map I just assumed the film must’ve been adapted from a doorstop-sized novel (it’s not). But what the movie lacks in discipline and polish, it more than makes up for in sheer sincerity. The Water Diviner is a proudly old-fashioned, genuinely heartfelt picture so damned earnest that Crowe seems to be all but daring you not to like it. I liked it a lot.

The year is 1919 and Crowe stars as Joshua Connor, a sad-eyed farmer with an uncanny gift (thankfully never explained) for finding water beneath the rugged outback sands. His three sons went missing in action at Gallipoli four years ago, but night after night, his grief-stricken wife still calls upon Joshua to read bedtime stories in the boys’ empty room. When she drowns herself (a cruel rebuke to her husband’s power), he decides it’s time to go to Turkey and bring home his sons’ remains, so they may be buried alongside their mother.

This is grim stuff, even more so when Joshua reaches the Dardanelles and happens upon the newly formed Imperial War Graves Unit. An ANZAC lieutenant (Jai Courtney) is working with an Ottoman major (Once Upon a Time in Anatolia’s great Yilmaz Erdogan) on the nigh-impossible duty of marking the final resting places for over one hundred thousand fallen soldiers. It’s a rough sequence, with harrowing flashbacks giving full weight to the unfathomable losses on both sides of the Gallipoli campaign. But when Erdogan’s Major Hasan takes a shine to this stubborn Aussie farmer, The Water Diviner’s true colors begin to emerge.

The film quickly blossoms into a sometimes-clumsy fable of reconciliation and hope amid the ruins. I probably couldn’t spoil the convolutions of Andrew Anastasios and Andrew Knight’s screenplay even if I wanted to, but basically, Joshua soon finds himself ducking and dodging his way all over this foreign land, amidst the invading Greeks, rallies for Turkish independence and (too) much international intrigue. Unlikely allies abound, not the least of which are a war widow (To the Wonder twirler Olga Kurylenko) and her spirited young son (Dylan Georgiades), who run a Constantinople hotel that prides itself on having “hot water and no Germans.”

What began as a funeral becomes a muscular outdoor adventure, complete with rousing horseback action sequences and our hero dispatching baddies with a cricket bat. As a director, Crowe can’t quite reconcile the tonal whiplash, but as a star he’s well at ease, delivering one of his most straightforward, effortlessly charismatic turns in ages. He makes the movie make more sense than it probably should.

There’s a chutzpah to The Water Diviner that I found wonderfully endearing—a winning force of personality with which it travels from darkness to light, paying dues to the sadness of the past while offering hard-won optimism for the future. The movie’s got a lot of problems, but also a lot of heart.