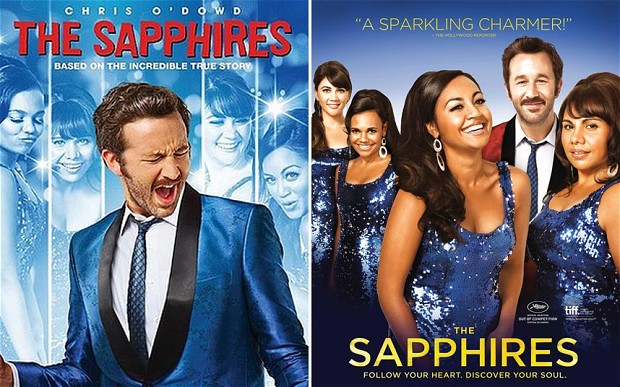 The story of a male singer with his four female back-ups getting ready to sing a storm in Saigon during the Vietnam War is a perfectly plausible one, finding success in the form of Australia’s 2012 feelgood hit The Sapphires. It came off a treat and to much critical acclaim.

If you knew the first part of that paragraph was a lie, you’re probably an Australian seriously questioning my credibility. But that’s how the story about an Aboriginal pop group and their Irish manager is being portrayed through an ill-thought marketing plan for its US DVD release.

US distributor Anchor Bay Entertainment launched their DVD cover last week, prominently featuring said manager (played by Chris O’Dowd), with the four girls in the background under a blue wash. In that time, the Australian entertainment industry has been reeling.

The public got on board in a big way via social media, labeling the cover racist and sexist after O’Dowd himself called it vile in an interview. Australian journalists have questioned the debate, at least one calling it smart on the count of O’Dowd’s growing popularity.

The original Sapphires whom the film is loosely based on (Naomi Mayers, Beverly Briggs, Lois Peeler and Laurel Robinson) have also come out to state their disappointment by writing to the National Association for the Advancement of Colored People asking for support.

They are unhappy about the cover for its lack of accuracy towards the film’s story and its overall disrespect. Not to mention it denies the chance for some of Australia’s established and new Aboriginal stars to have their time in the spotlight.

In the wake of this dark chapter in Anchor Bay Entertainment’s history, the distributor has issued an apology. The claim they will review the artwork for future shipments may satisfy some, but it raises the question of how far marketing can stretch a selling point, and whether Australian stories are lost on international audiences.

It’s not the first time Australians have been lost in translation; the use of subtitles in the US theatrical release of Mad Max is still boggling. Australian culture is purported to be Crocodile Dundee-style, and anything that goes against that mold becomes a struggle for US distributors.

Why that is remains uncertain. The Sapphires, a story of camaraderie and female strength, is one that can resonate with a wide audience. It’s with its dramatic moments but remains generally light-hearted and reveals a side to Australian culture many internationally know little about.

The film was screened to a standing ovation at its world premiere out of competition at Festival de Cannes 2012. It is now Australia’s 14th most successful film of all time in their domestic box office.

While it did not perform well in its limited US theatrical release, that has meant nothing for the likes of numerous cult films. At first thought, focusing the cover on the seemingly bigger draw card of O’Dowd is fairly understandable, but ultimately Anchor Bay Entertainment has handled this carelessly. To purport a different story to that the film actually contains signifies a lack of faith in the product.

That’s a disappointing notion for a film that deserves its received praise.