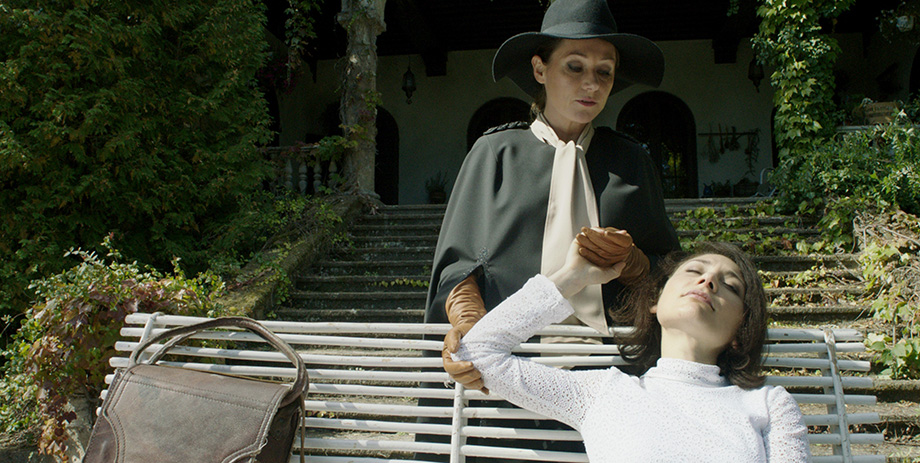 “The Duke of Burgundy”

Being in a relationship means doing things you don’t want to do. Abstract cybercrime thrillers may not be your thing, but if your partner is into Michael Mann, then odds are high you saw Blackhat. It’s all part of the routine – not so much about placating your partner, but about ensuring that the status quo, the mutual support, remains unchallenged. So if your partner likes to be humiliated – say, verbally, or sexually, or with the aid of bodily fluids – then odds are just as high that you dish out the punishments they desire. Which brings us to The Duke of Burgundy.

Cynthia is our dom, and Evelyn our sub – the former expels the fluids, and the latter laps them up. For their tale, director Peter Strickland has lifted all sorts of sexploitation standards – the master/slave dynamic, an opulent manor as our setting, crash-zooms, cross-dissolves, and even the credits are done up in the freeze-frame 70s exploitation style. But there’s essentially no nudity here, and his compositions playfully obscure almost all of the sex acts depicted. He played a similar beat in his last film, Berberian Sound Studio, which borrowed the audio-visual hallmarks of Italian horror films, only to subvert the expectations inherent in them, instead crafting an intensely aestheticized psychological study. Here, his shots constantly eschew point-of-view, leaving us to consider the couple as a single entity. Even the anxious hallucination sequences could conceivably be sourced from the mind of either character. This is another psychological portrait, but of a shared psychology, one facing great strife. Bondage coming undone.

Strickland, a good dom himself, is deeply withholding: The first interactions between Cynthia and Evelyn are presented devoid of context, leaving the viewer to project their own meaning onto the infractions and punishments. Only when the game ends do we realize their actions are scripted and confirm that the acts are consensual. (They literally follow a screenplay, which implants the idea that this is as much about our relationships with movies as it is about our relationships with people – but that’s another article.)

Dramatic revelations follow from there: that Evelyn is the relationship’s demanding sexual instigator; that Cynthia’s domineering role is pushing her further than she’s comfortable going; that the couple’s most coveted sex toy, a sensory deprivation trunk built into the underside of a bed, is tragically back-ordered. (Strickland’s banal treatment of their alt lifestyle provides for absurdist humor aplenty.) Affection is diluted as pleasure-seeking continues. Evelyn, growing directorial, uses her safe word more often. Cynthia, growing annoyed, elects to abide by it much less. Relationships as role-play, with cracks appearing in the foundation whenever a partner breaks character.

It’s at this moment of dramatic climax that Strickland, as he did in Berberian, dispenses with drama altogether. Duke operates on dream logic from the start – references abound to Jess Franco and The Bitter Tears of Petra Von Kant, to give you an idea of what universe we’re in – but the third act sees the visual motifs (panties, insects, the trunk) emphasized, and the character’s anxieties externalized, by way of Brakhage-esque experimental sequences. Symbols of entrapment and solitude invade with nightmarish fervor. The portrait becomes abstract.

Just don’t call it a love story. Strickland leaves his finale open for interpretation (really, it’s only open to one of two interpretations – but that is, again, a different article) with the question being whether Evelyn is strong enough to break her need for their BDSM-routine, or whether Cynthia is strong enough to withstand it for the sake of standing by her woman. Hiding behind the mask of sensationalism, Strickland’s confronting deeply discomforting questions that pervade through all relationships, sadomasochistic or otherwise. When does sensual pleasure and emotional support trump the spark of romance? When is your partner just a vessel for obtaining whatever makes you comfortable? And when do you stop playing your role?