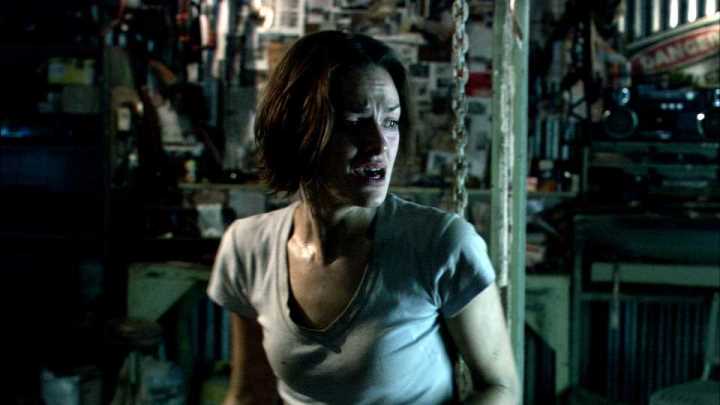 Halloween is nearly upon us! It’s not unusual for cinephiles to spend the holiday–or the entire month of October, for the matter–binge-watching their favorite horror films. And why not? Horror is one of cinema’s most fascinating, atmospheric and diverse genres, and there’s a long history of great films intent on spooking the audience. In an effort not to forget some of the most influential and well-crafted horror films around, here are 10 movies you should consider watching in between parties and trick-or-treat outings.

10.) The Serpent And The Rainbow

While director Wes Craven is best-known for films like Nightmare On Elm Street or his groundbreaking slice of meta-horror Scream, very few of his pictures are as aesthetically bewildering as this bizarre voodoo-influenced tale of a man searching for a powder that will allegedly zombify anyone who ingests it. It maintains much of the dream-like terror that Craven is known for, but in a far more distilled manner. It features a handful of breathtakingly terrifying sequences (a scene of Bill Pullman stumbling through a village may be the most arresting thing Craven has ever shot), this Val Lewton-esque thriller puts an exploitation spin on classic gothic horror.

And speaking of Val Lewton, his I Walked With A Zombie is a damn good and sadly underrated horror masterwork. Re-teaming Lewton with Cat People helmer Jacques Tourneur, this superstition-filled suspense film is a definitive piece of horror, if only to prove that atmosphere is everything when it comes to crafting an unforgettable thriller. It’s a thoughtful and poetic horror picture that proves the best horror films are bred from directors with a keen sense of atmosphere.

A handful of films from director Kaneto Shindo could have landed on this list (particularly the breathtaking Onibaba), but it’s Kuroneko that may prove to be the director’s true horror masterpiece. A fable of the highest order, the film is a revenge tale drenched in atmosphere and ghoulish black and white photography from Kiyomi Kuroda, a gorgeous and unforgettable piece of expressionistic cinema. It’s also much more than a standard J-horror thriller–this meditation on loss is both a deeply profound piece of revenge storytelling and also proof that Shindo may be the greatest of all arthouse horror craftsmen. There’s no other film quite like it.

And there are very few horror pictures like Wolf Creek. A mostly forgotten gem among all the other dreadfully dull torture porn pictures of the past 15 years, this “based on real events” thriller stars John Jarratt as possibly the most charismatic of all killers on this list, a bizarrely magnetic son-of-a-bitch who terrorizes two travelers in the Outback. This raw and unflinching film uses the modern style of thrusting the viewer into a universe of uncompromising and unending brutality, but with a visceral sense of realism that elevates the material. Wolf Creek does for the outback what Jaws did for swimming, and it’s the most underrated horror film the aughts never truly respected.

Director Paul Leni hits this list with one of the greatest silent horror achievements of the time period. The definitive “stuck in a house with a  killer” picture, this pitch black comedy cements Leni as an under-appreciated master of blending comedy and true terror. It boasts a stunning sense of light, atmosphere and mood, and though it features a simplistic set up, the follow-through is as exciting as any horror film from the silent period. This is a forgotten masterpiece, and your October isn’t complete until you sit down and take in this classic silent gem.

The second silent film on this list may very well be the most entrancing and hypnotic horror film ever made. Vampyr is the type of horror film that should be seen as the ground floor for genre entries going forward. Breathlessly atmospheric and oozing Gothic brood, this nightmarish vision into the life of a student in Paris is profound, moving and ultimately impossible to shake. Director Carl Theodor Dreyer utilizes a variety of inventive cinematic tricks to produce an aesthetic as horrifying as any film I’ve ever seen.

Ingmar Bergman was known for many things, but not his affinity for the horror genre. Despite having roots in the brooding silent cinema of filmmakers like Victor Sjostrom, Bergman’s eye was always set to both the intimate (human relationships) and the spiritual (relationships to God and death), but with Hour Of The Wolf he crafts a horror film so deeply haunting that it’s one of his most exciting works. The film (seen as a companion to his equally troubling Persona) examines the decay of an artist’s life, and with its troubling imagery and era-defining use of black and white photography, it’s a classic of the absolute highest regard.

While he may be better-known for his experimental classics like The Man Who Fell To Earth, Nicolas Roeg’s true masterpiece is a definitive classic within the horror genre. A breathtaking adaptation of a Daphne du Maurier classic short story of the same name, this film is one of the most beautiful horror movies ever made. Donald Sutherland and Julie Christie prove even horror films can get career-defining performances out of A-list thespians, and the stunning photography helps cement Roeg’s picture as both a haunting horror film and one of the most moving meditations on grief and marriage ever depicted onscreen. This is, quite simply, a masterwork from one of cinema’s greatest poets.

As far as directors go, few are as underrated and undervalued among cinephiles as director Edgar G. Ulmer. Despite helming the beloved noir film Detour, he’s a relatively forgotten filmmaker, yet one of his crowning achievements is a horror masterpiece. The Black Cat teams Bela Lugosi with Boris Karloff, and the result is an expressionist masterpiece that mixes the aesthetic leanings of early German cinema with a brisk sense of perversion. An atmospheric and haunting meditation on pure evil, this is a classic horror film that needs to be on anyone’s must-watch list for this coming Halloween.

Thanks to work like his underwhelming but most well-known film Dracula or his masterpiece Freaks, few filmmakers have become as synonymous with the genre as Tod Browning. And yet, one of his best films is one of the least talked about classics in the genre. Entitled The Unknown, the film stars Lon Chaney as a criminal on the run, and it’s a brisk, intense thriller that features superb turns from Chaney and a breathtaking Joan Crawford. Boasting the best direction of Browning’s career, it’s very likely the greatest horror film you’ve never seen.