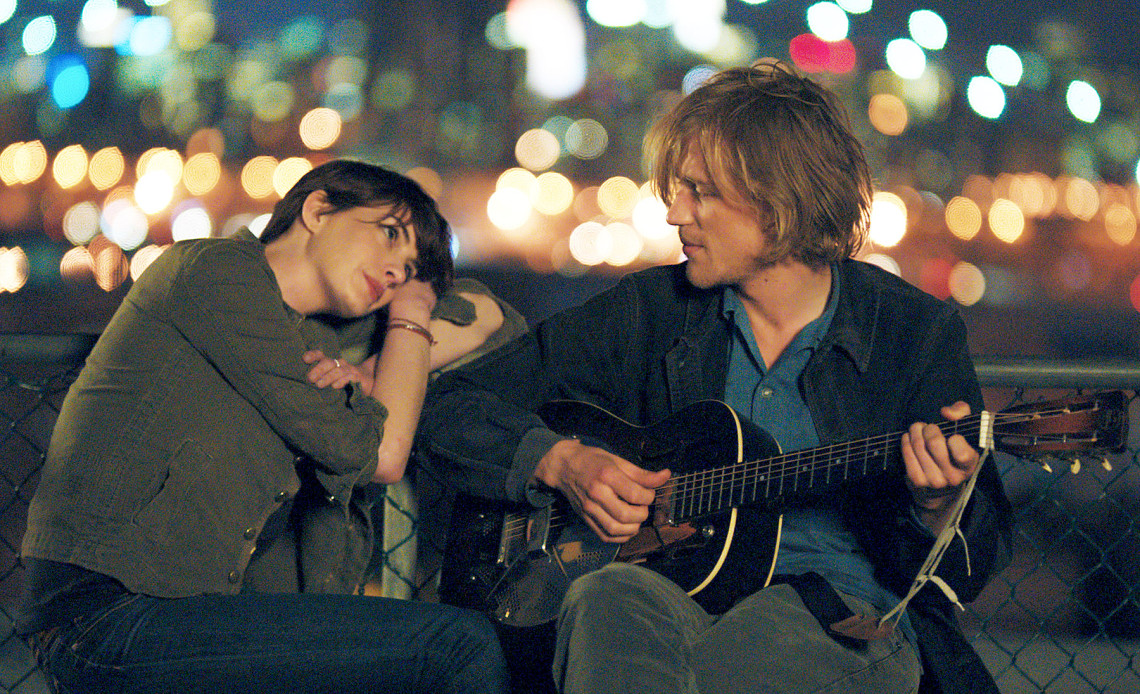 At 86 minutes in length, Song One feels long. Occasionally, a warped sense of time and duration can be of benefit to a film – last year’s Ida doesn’t breeze by, and it’s all the better for it – but in the case of Kate Barker-Froyland’s debut as director, the effect renders her work frustrating. Song One isn’t bad; it is, however, disjointed as a melancholy testament to music’s ability to heal all wounds and as a love story about disaffected souls set against the backdrop of New York City’s modern folk scene. In the former mode, the film is arresting. In the latter, it’s an unfinished patchwork of amour and bruised family ties.

Grief has a way of bringing together kin and strangers alike. In the case of Franny (Anne Hathaway) and James (Johnny Flynn), it’s the second ; she’s an anthropologist so embroiled in her work in Morocco that she hasn’t spoken to her family in half a year. He, on the other hand, is a folk musician riding a wave of low-end fame after releasing a successful record. The common thread linking them is Henry (Ben Rosenfield), Franny’s brother and a devoted fan of James’ work. Henry engages the artist’s struggle, too, attempting to follow in the footsteps of singers like James and all who came before him. But in a moment of distraction, the young man steps into the path of an oncoming taxi and ends up comatose with an uncertain prognosis.

So Franny comes home to pick up the pieces and tend to her suffering as well as her mother’s (Mary Steenburgen). She also begins tracing the trajectory of Henry’s life, using his diary as a map through his daily comings and goings. (Because she’s an anthropologist, remember?) Along the way she meets James; the two begin courting, and thus, the film hits its stumbling block. The more time the pair spends together, the more Franny’s reasons for coming home grow blurry. Neither she nor Barker-Froyland forget about Henry, per se, but the film emphasizes Franny’s budding affair with James so much that Henry becomes a footnote. He’s a catalyst more than a character, and explorations of Franny’s sibling guilt are left in the margins. The effect is unintended callousness.

It makes sense that Franny might assuage her remorse through human contact; we learn that her six-month radio silence punctuated a falling out with Henry over his career choices. Things said and unsaid haunt her, and that dynamic is articulated beautifully in quieter moments where she wafts restaurant pancakes beneath Henry’s nose while cranking tunes for him through a gramophone. (The film’s hipster flourishes are charming, if tiresome.) Hathaway can convey sorrow with aching precision. When she’s in her element, Song One is a moving, occasionally prickly yarn about regret.

But when the film swaps focus to Franny’s budding affair with James, it stumbles. There’s a disconnect between their attraction and her distress, even though one clearly informs the other; maybe it’s the way Barker-Froyland stresses flirtation over mourning, or maybe it’s the dearth of chemistry Hathaway has with Flynn. James is uncomfortable with being recognized and discomfited over the direction his music is taking him; perhaps that explains Flynn’s decision to play the character as stiff and overcautious. But his reserve dilutes the swell of Song One’s romance. This is a movie about people bonding over tragedy, the demanding grind of the music industry, and the soothing effect of a good, earnest melody; it just so happens that it’s only good at one of these, and one out of three isn’t enough.