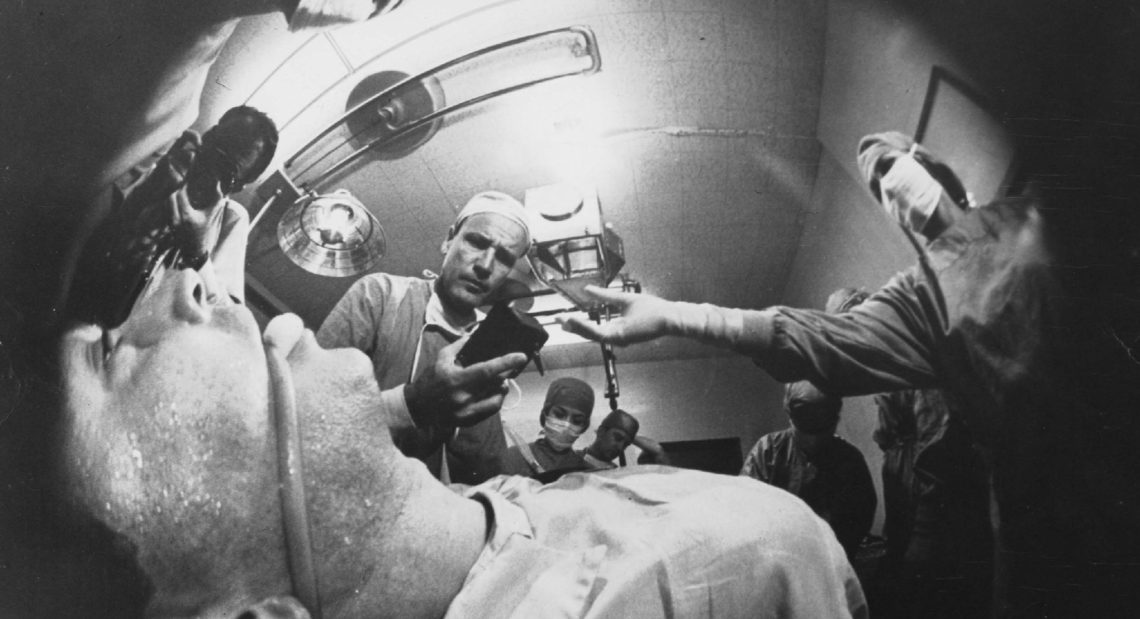 Not Seeing Through the Bullshit

Seconds tells a familiar American story: a man is unsatisfied with the repetitive existence of work and home, and wants out. Seeing only himself and his unhappiness, he needs something new, but is incapable of reaching for anything more. From the moment it begins, you know Seconds will not be an easy movie to experience. Saul Bass’ opening credits look like reflections from a funhouse mirror moving over a man’s face. These images are barely recognizable as human, distorting and changing in a nauseating way. For the entirety of the film, the camera never lets you rest. The opening scene—of our protagonist walking through Grand Central Station—calls to mind found footage from a haunted GoPro camera, following the man around and showing his face at unnatural angles.

Instead of feeling like we’re walking with him, it’s a seasick experience where the viewer is too close, too involved in the events. The camera is never placed where you expect it to be, or the view is through a fisheye lens. It has the effect of disorienting you constantly, as though you’re a spy visiting some other planet, immersed in but disconnected from the events. Objects and people move in and out of focus as in a dream; images blend into one another in a dreamlike haze, yet the scenes are edited together abruptly, a blunt end here cutting to a shocking beginning there. The tight shots of faces are too intimate, so close that they render people into sweaty masses of flesh. It’s body horror in which the horror comes from being removed from your physical self, your soul adrift, the body nothing more than drab meat.  James Wong Howe’s cinematography is what makes Seconds something you experience, rather than simply view. He never allows you to find steady ground, and it is this surreal atmosphere he creates that turns a twisted mystery into something visceral and very difficult to shake off. 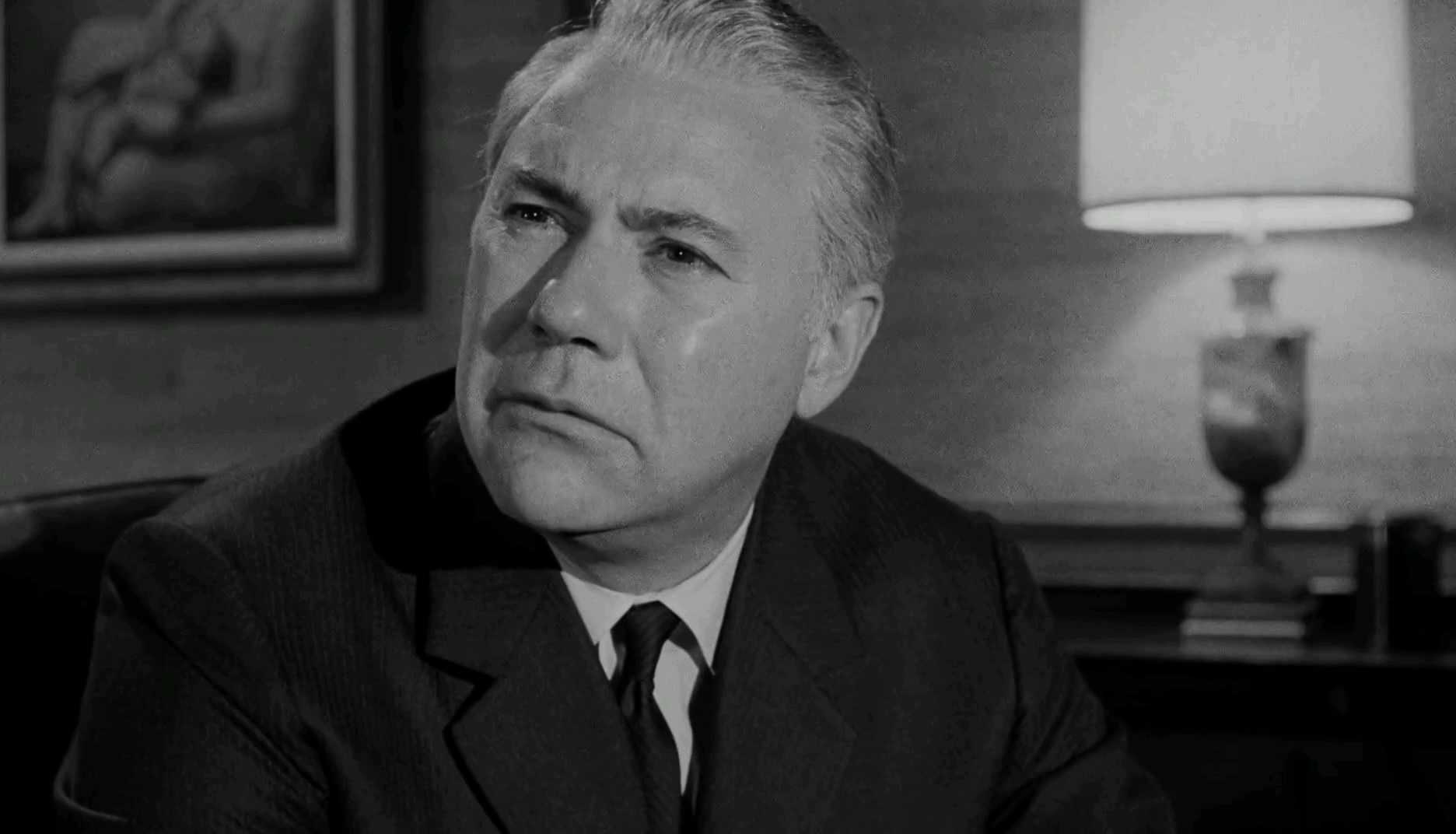 The man, Arthur Hamilton (John Randolph), exists in bland, deeply depressing peace. His wife is gentle and caring, but it’s clear they are disconnected – an early scene shows her attempt to passionately embrace him, while he is mentally somewhere else. She responds not with hurt or anger, but the understanding pat on the back of someone who long ago resigned herself to life in a world where she is invisible. She loves her husband and wants to connect, but he won’t come to her. His days are the same until he receives a note with nothing but an address, and a pleading call from a friend who’s supposed to be dead. The call terrifies him, but the terror of the known wins out over the terror of the unknown.

Arthur finds the address, a heavy-handed but effective metaphor: a meat-packing company. An employee escorts him through rooms of anonymous slabs of hanging meat, puts him in the back of a truck, and drives him to the doorstep of a mysterious organization. As soon as he walks through the door, the deal is done – he is taken to an office and told that he will get a new face, a new name, and a new life. They say it’s an opportunity, and that it’s what he wants, but the elevator has no button. He is scared and unsure, but deep down he thinks he does want it. He puts up a fight, but like he handled so much else in life, it’s half-hearted. Arthur is taken into surgery and wakes up as Antiochus Wilson (Rock Hudson) – the face and body beautiful, but the eyes dull and sad. Casting Hudson as a two-faced man with an identity crisis here is brilliant, knowing now that Hudson hid the fact that he was gay for most of his career. Looking back, it’s no wonder that Antiochus talks so convincingly about being an unsatisfied man running from himself, unsure of who he really is and how he is perceived.

As expected, Arthur/Antiochus’ journey into a new life does not go very well. Though he’s moved to a beautiful beach house and given the identity of an artist free to paint and do whatever he pleases, he is deeply uncomfortable in this unfamiliar role. One of Seconds’ best scenes is one of its strangest. In it, Antiochus takes a trip with Nora, his beautiful new neighbor, to a gathering of hippies in a celebration of Bacchus, the Greek God of wine and wild, nude writhing. He joins her without knowing what he’s getting into; marching along with the hippies, he seems skeptical and afraid. They hike to a wooded area and stop in a clearing dominated by barrels of wine and one huge, open barrel full of grapes waiting to be stomped. There’s music and dancing and laughter, all shot and edited with a frenetic energy matching the group’s activities. Nora gets increasingly drunk and decides to join in a mass of naked people inside the barrel. They smash the grapes, roll around in them, and rub them over each other’s skin, until we see nothing but an unintelligible mass of bodies. 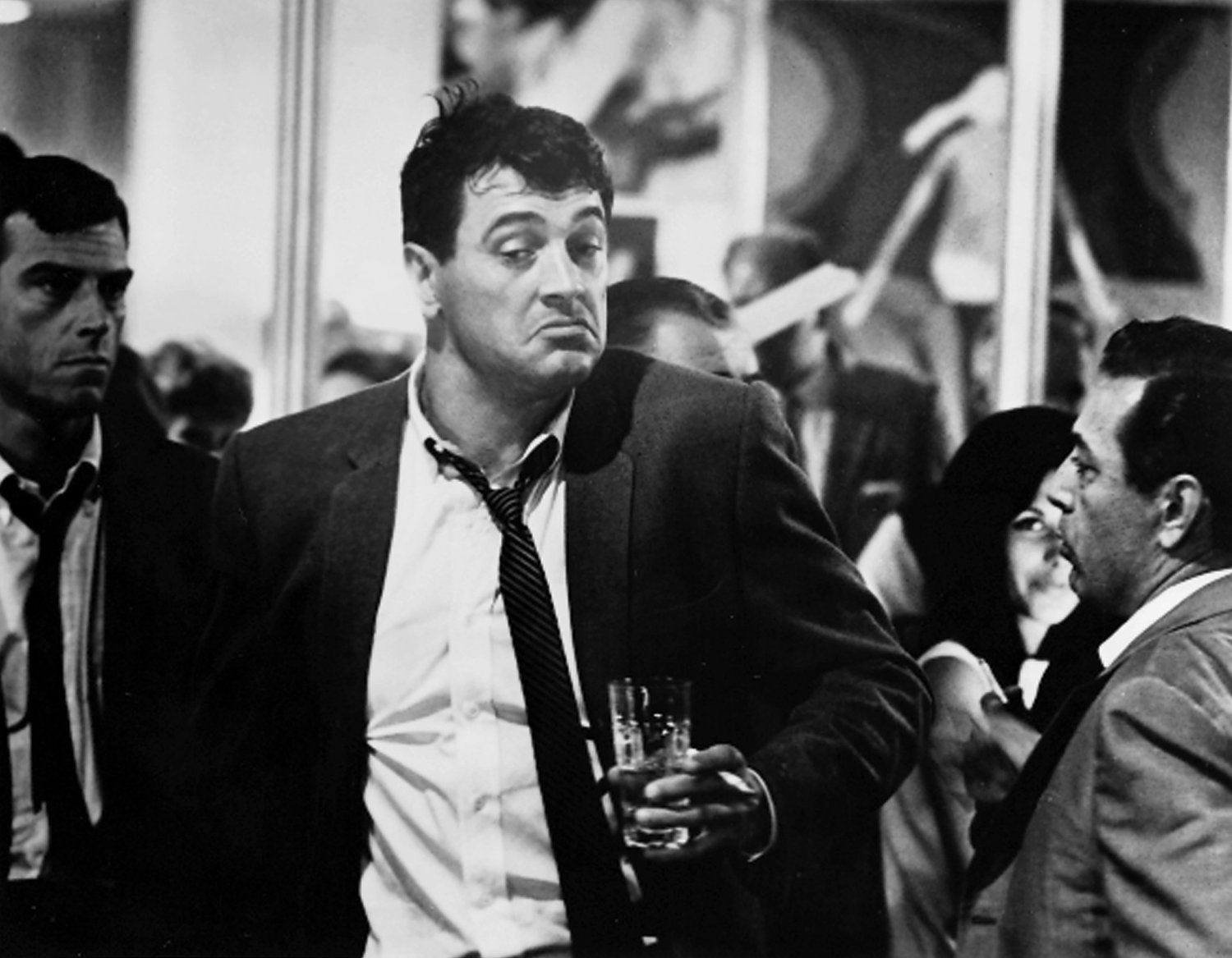 As the camera shows women stripping their clothes off, there is nothing sexual inferred, no intimacy or titillation in the extreme close-ups of people kissing or fondling each other. Antiochus sees Nora entering the barrel and tries to run after her, but a mob of hippies in crowns of ivy restrains him, rips his clothes off, and throws him in. He panics at first, desperate to get out, but quickly comes around as Nora hugs and kisses him. He goes from screaming in fear to laughing and screaming “Yes!”, and the sounds aren’t all that different. It’s a particularly harrowing scene that, from a different perspective, could be so beautiful and free. Had it been shot in lush color, with hazy filters and slow camera movements, it might have been joyful and liberating. But the dizzying visuals and stark black-and-white turns the episode into a nightmare. The wine and grapes look like gore; in the moment Antiochus decides to let loose, it’s as if he’s being born again, drenched in holy wine and covered with fruity afterbirth. So begins his liberation, but also his descent, as he goes too far and gets too wild, embarrassing himself and ultimately deciding he is as trapped in this newfound insanity as he was in the dull coldness of his old life. Even though the decision occurs only about halfway through the movie, in one swift motion, the scene gets to the larger point – you cannot escape yourself. Arthur/Antiochus hasn’t let go of his fear; he’s just channeled it in a different way. What follows is a grim spiral into doubt and panic and sadness, and discovery of the sinister background of the organization. His plan has not worked, and he escaped from the hell he could have changed into a hell he cannot. The fantasy he abandoned reality for has become his prison; Arthur left his wife and meager but respectable life for a childish dream.

This mad science face-swapping organization at first acts as a metaphor and a hybrid of the advertising industry and society’s view of the American dream, preying on people’s weaknesses and telling them what they want and need. That the opportunity is a trap is immediately evident, but by walking through the door, Arthur is already in too deep. At first the movie paints him, and by extension the viewer, as the victim. Even though he is selfish, we’re sympathetic because he seems so confused. He can’t help that he’s been told what he should want his entire life. More than anything, he is desperate for change, aching for someone to tell him what to do. But when they tell him, he looks as if he is slowly drowning. It’s easy to feel sorry for him sometimes and incredibly hard other times. We see ourselves in Arthur, which makes us sympathetic, but his pathetic frustration is often repulsive, precisely because we can relate. 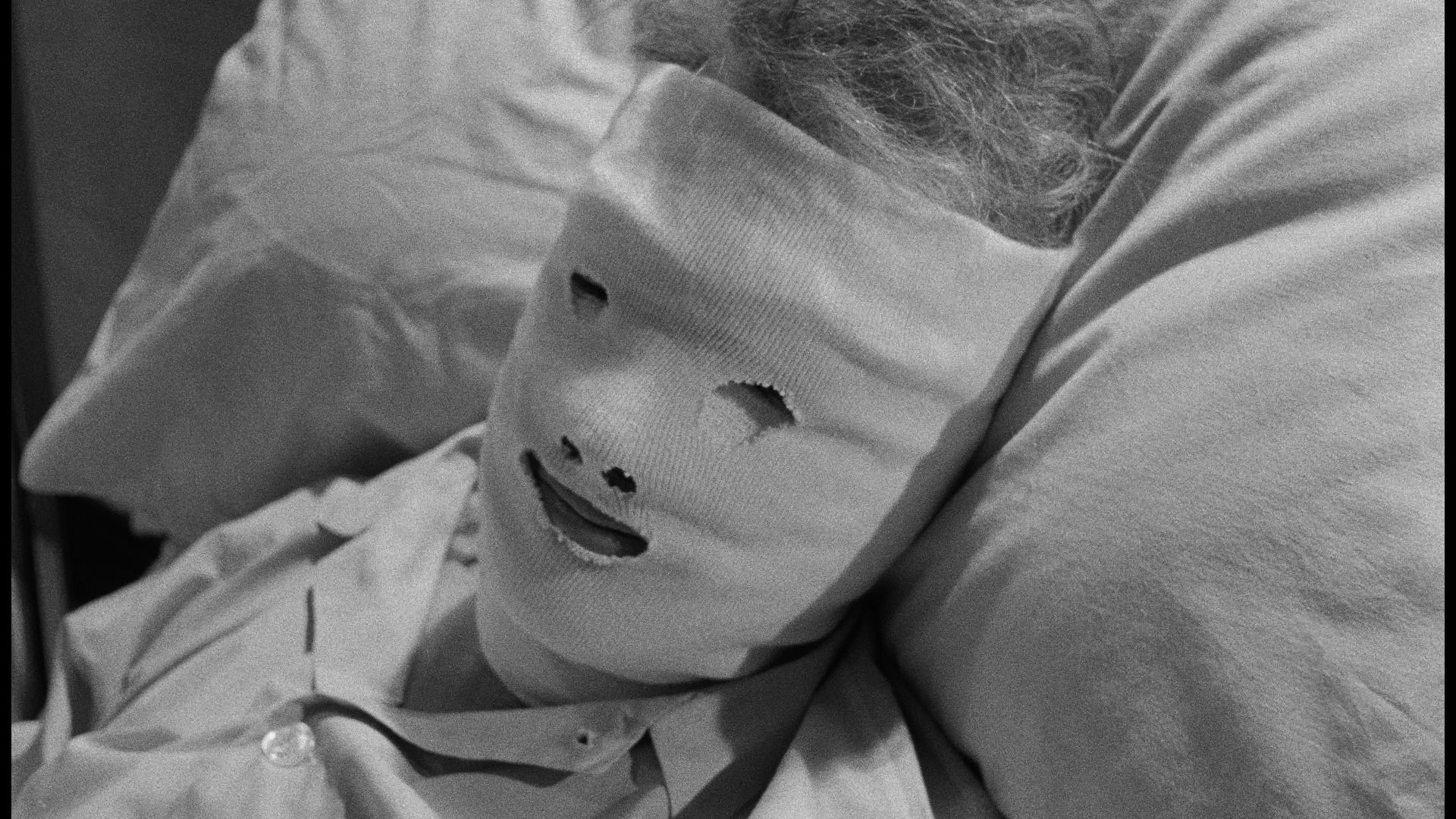 What makes Seconds so uncomfortable is that in the end, the blame is placed squarely on us – not the evil corporation, not the idea of the American dream, not the drab house or the complacent wife or the unsatisfying job. It’s our fault for not seeing through the bullshit, for being ignorant enough to miss the simple fact that you can never get away from yourself. We buy into one advertisement after another, always believing that happiness lies just on the other side of the next hill. It’s difficult to watch, because it’s difficult for anyone to deny that they’ve indulged in some form of escapism, entertained a false hope, bought something because it looked nice in a magazine.

Seconds is really an indictment of every facet of the American dream, both the traditional suburban lifestyle and the independent hippie spirit. It presents these not as opposites but two sides of a coin, two forms of denial that are wildly opposed on the surface but ultimately serve the same purpose – to conform to a group, to lose individuality to fit in. Either you drown out your inner self with the drug of wildness or the drug of stability. It’s a radical idea for 1966, and it’s still relevant today, but what makes Seconds timeless is not the cultural commentary but the sinister suggestions about human nature. These are still meaningful 50 years after its release, and they’ll be meaningful in another 50, because people will always be searching. Any form of inner peace is difficult enough to find even without the constant bombarding of the senses, trapped under the control of advertising induced peer pressure.

What struck me most about Seconds when I first saw it wasn’t how bleak it was, but how it resonated with me personally as a message, almost a warning. Seconds does serve as a hellish portrait of fear, anxiety, and cynicism. It’s the kind of horror movie that drills its way into your mind, where jump scares are replaced with very real dread, reminding you of thoughts that kept you up at night long before you ever saw the movie. But as dark as Seconds is, we aren’t beyond salvation. What it tells us is that there is no turning back once you take the easy way out, once you give into what other people have told you is the right way your whole life. Once you’re trapped in the system, the only way out is through a different trap. The only way you can save yourself is by not walking in in the first place. Salvation comes from within; you can travel the world but never leave yourself behind. Instead of trying to buy an answer, we must change before it is too late.