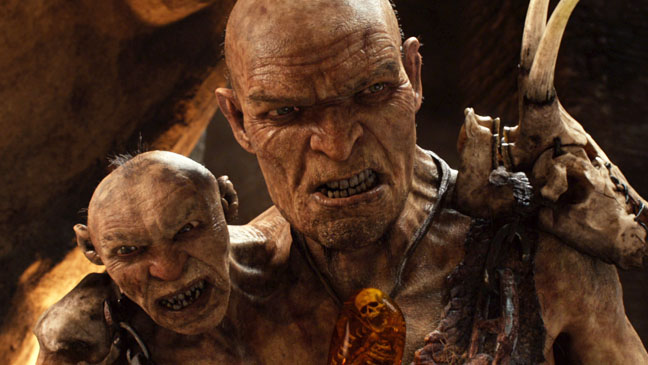 Jack the Giant Slayer: More of a Human-Sized Failure Than a Giant One

It’s impossible to imagine a good Jack and the Beanstalk film. The fairy tale itself simply isn’t cinematic. When you add to the equation the sheer degree of difficulty in creating believable effects work for giants, beanstalks, and a kingdom in the sky, it simply doesn’t seem to be worth the financial investment. However, as re-imaginings of fairy tales seem to be en vogue, someone clearly saw money to be made if the fairy tale was given more, you know, pizzazz. The trailers gave me pause, but admittedly, in terms of blockbuster storytelling, the minds behind Jack the Giant Slayer did a fine job. They ground up the bones of the fairy tale to make the bread of their film, so to speak. The film itself remains underwhelming, as you might expect, but it’s quite possibly the best Jack and the Beanstalk film you could imagine the studio system producing. Whatever that means.

Jack (Nicholas Hoult, hunky mouth-breather) is to sell a horse at market. He lives with his uncle on a farm, and money is difficult to come by. He happens upon a monk, who gives him beans for the horse, insisting the beans have incredible value. He’s not wrong: the beans come from the crypt of an ancient king, where they were buried to keep them safe from wicked hands. These beans create magic stalks that lead to a kingdom of giants, and wouldn’t you know it, these giants are an irritable sort. They’ve been trapped in this sky kingdom thanks to a magic crown made from the melted heart of a giant, which enables its wearer to control the giants. (I can hear the eyes of cynics rolling– you should have known by the title this film wasn’t for you.) The crown has been dug up by Roderick (Stanley Tucci, master of fake teeth and ham), but the monk has vowed to keep the beans safe.

However, as fate would have it, one of these beans slips from the bag, and up sprouts a giant stalk. Also by sheer coincidence, the princess Isabelle (Eleanor Tomlinson, bland ingenue) happens to be carried up to the giants by the stalk. Thus, the king (Ian McShane, check-collector) demands his best man Elmont (Ewan McGregor, Errol Flynn impersonator) to take Jack and Roderick up to the giants to bring his daughter back. Unfortunately for them, she is captured by General Fallon (Bill Nighy, master voice actor for CGI villains), a giant with a second head that seems to be suffering from a mental disability. And both of the heads are ready for revenge against humanity.

The film sets itself up nicely for success. Ewan McGregor is a convincing swashbuckler, worthy of his own swordplay action franchise. The screen overflows with a who’s who of terrific character actors– there’s Eddie Marsan! There’s Warwick Davis! There’s Ewan Bremner! Is this a Trainspotting reunion? Will Ewan emerge from a giant toilet? Will a giant OD on human blood while Lou Reed’s “Perfect Day” plays? (Sadly, neither of those opportunities came to pass.) The story itself, while familiar, creates the air of a heightened fairy tale well, with acceptable suspense and execution. Bryan Singer knows how to create memorable moments and images within action, and this film isn’t lacking for iconography. It’s quickly paced, never boring, and it never devolves into awful the way the trailers would make you think it does.

Obviously the problems that emerge in most blockbusters also pop up here. The script nails the story down well, but its dialogue is mostly stock and its characters are unmemorable. Unfortunately, many of its more interesting actors either die early or aren’t on screen nearly enough. Also, the film’s climax, like most blockbusters, disappoints… although I’m not sure how else it could have possibly ended. However, the main hurdle this film simply can’t hurdle is the aforementioned effects difficulty. Every production design seems quite stagy: you never shake the feeling in all of the scenes without action that we’re on a plastic set (the cinematography of these moments, square and revealing, does no favors). The giants aren’t convincing either, as the practical and the computer-animated never seamlessly blend. It’s a shame on the heels of The Hobbit, whose large characters were breathtaking in 48 fps, that these characters look removed from some early-2000s film. Stanley Tucci walking amongst the giants reminded me of green screen work you see on the SyFy Channel. On SyFy Channel, this is fine and usually charming. On the big screen… it’s not.

Finally, the film doesn’t have nearly enough fun. At times it approaches blissful silliness, such as in one scene, a giant makes literal pigs-in-a-blanket, and Ewan McGregor is wrapped in dough himself after being coated with flour. Yet the self-aware blockbuster embrace of the impossibility of achieving serious drama with such an absurd premise is only maintained intermittently. If Bryan Singer allowed Ewan McGregor that hairdo and Stanley Tucci that teeth, he should have pulled out all the stops. There isn’t nearly enough gross giant behavior! There isn’t nearly enough death and carnage! There aren’t nearly enough puns on the words bean and stalk (though early on, we do get one “spill the beans” joke). Where are my squished humans? Where is my witty banter? Where is Slayer on the soundtrack? Where is General Fallon’s second head uttering “Quaaaaaid…”? The problem with too many blockbusters is they refuse to go all the way. They try to present silly scenes while still possessing enormous stakes. Don’t fool yourself. You’re a fairy tale re-imagining with effects that make us long for the realism of Honey I Shrunk The Kids‘ giant world. (That’s not a joke.) So although Jack the Giant Slayer never falls to earth, as the ghastly trailers would lead you to believe, it never truly… slays us.

Final note: I will say this film has the best set-up for a sequel that perhaps I’ve ever seen in a film of its kind. I’d kill to see the sequel they’ve set up; it would be insane, exactly the way this one should have been.