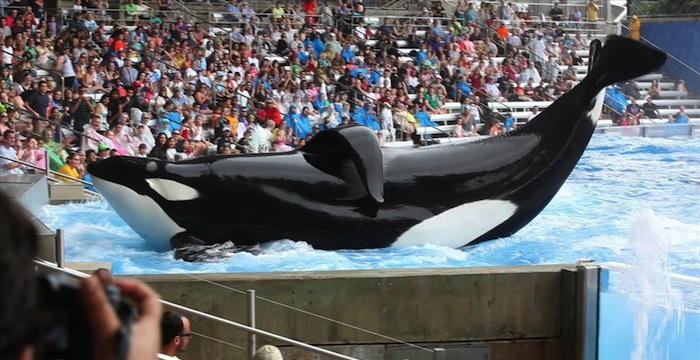 The only reason Blackfish isn’t the most disturbing documentary of the year is that this is the year The Act of Killing came out. But while the latter film focused on existential horror of the evil that people are capable of inflicting on one another, Blackfish is about the terrible things we do to other creatures. Far scarier, though, is how the movie portrays what happens when those other creatures fight back.

Tilikum is the largest orca currently in captivity, 22 feet long and weighing 12,000 pounds. Captured as a calf in 1983, he lived in a shoddy Canadian water park until 1992, when he was brought to SeaWorld Orlando, where he has resided ever since. During his time at these parks, Tilikum has killed three people. With each incident, the parks have denied that they were the result of anything but error on the part of the victims. Orcas are gentle, friendly animals that simply don’t know their own strength, so one has to be careful when interacting with them, they say.

It’s true that, as far as we know, orcas have never fatally attacked humans… in the wild. For captive orcas, though, it’s a much different story. Filmmaker Gabriela Cowperthwaite and her crew decided to investigate Tilikum after his most recent killing, of veteran SeaWorld trainer Dawn Brancheau back in 2010. During a routine performance, Tilikum dragged her into the water and mutilated her. SeaWorld claimed that he seized Dawn by the ponytail she supposedly shouldn’t have had (even though it’s pretty obvious that most female trainers wore their hair in such a style), when most eyewitnesses agree that he bit into her arm. In exploring Tilikum’s life, Blackfish uncovers disturbing trends in the behavior of captive orcas, not just at SeaWorld but at similar parks all over the planet.

My family visited SeaWorld Orlando numerous times when I was a kid. Always a lover of animals, I vastly preferred the park to Six Flags and the like. The killer whale shows were my favorite part of the experience. It was awe-inspiring, the sight of the majestic black-and-white giants cutting through the water with uncanny grace. And of course, they would also splash the audience with water, which was delightful. Thinking back, it’s eerie to realize that I most likely saw Tilikum perform at some point. If I hadn’t already learned of how bad parks and zoos are for animals and decided to never visit SeaWorld again, then this doc most definitely would have convinced me to do so. Orcas aren’t cuddly objects for our amusement – they are intelligent beings for whom captivity is torture.

The movie lays out how drastically different life in the wild is from life in a park for orcas. Their natural physical activity and social structure is nothing like what they experience in a tank. Dorsal fin collapse, exhibited by most captive male orcas (including Tilikum and, famously, Keiko, the orca star of Free Willy), is extremely rare in nature. Orcas live roughly half as long in parks and aquariums as they do in the wild. What’s unnerving and outrageous is that any guide at SeaWorld will tell visitors that these are perfectly natural phenomena, and that the orcas are better off in their care. But what happens when you keep an intelligent animal in a confined space, giving them only periodic moments to play? They go insane. And that, Blackfish argues, is why Tilikum has killed three people.

Since there are always video cameras running at any given SeaWorld show, a good deal of orca attacks have been well-documented. The film is so graphic that, when it began playing Dawn Brancheau’s fatal performance, I was honestly wondering whether it would show her death on-screen. Thankfully, it holds back, but even going as far as it does feels like its toeing a line between what’s visceral and what’s purely exploitative. Blackfish has some of the most terrifying imagery I’ve ever seen in a documentary. There are multiple sequences of orcas thrashing their trainers about in the water. The sheer helplessness of the humans up against the raw power of the whales is absolutely chilling. One young woman emerges from a tank, having barely escaped with her life, with her arm horrifically mangled. I have to agree with Anthony Kaufman and question how necessary it is. In one scene, the movie actually replays a moment when two whales crush a man between their bodies.

This is all in the service of driving home the point that our control over these animals is tenuous at best and illusory at worst. Most of the interview subjects in the film are former employees of SeaWorld who now regret their time there. All of them attest that they mistakenly believed that the orcas in their care were their friends, when the whales easily could have savaged them at any time. One area that the doc neglects is the question of just what kind of intelligence orcas possess. It affirms that they are possibly sapient but doesn’t explore that idea very much. In fact, it could have, and possibly should have, done more to explain the context of nature in regards to the animals. As it is, there are only two scientist experts on hand to talk about them.

Blackfish expertly works over the viewer emotionally, sometimes overplaying its hand when doing so. It doesn’t quite trust its audience, and makes its case through one gut punch after another. For all it’s artistic shortcomings, though, I really hope that this movie is able to instigate some kind of change in the way we treat orcas, or at least how we think about them.