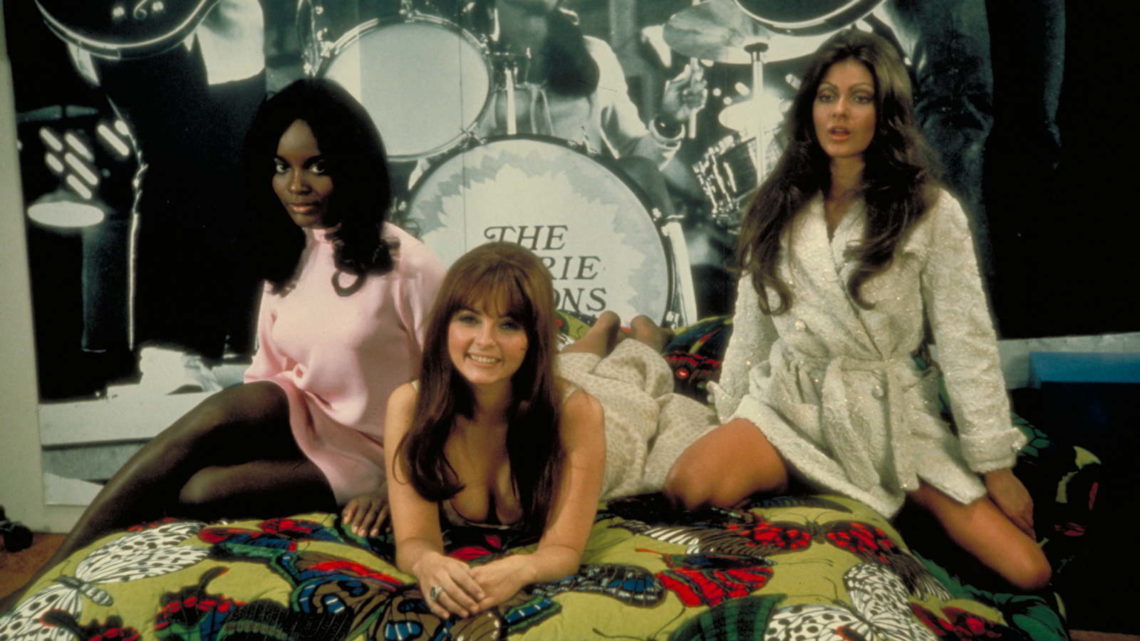 Battling the Mundane with “Beyond the Valley of the Dolls”

As Criterion releases it on Blu-ray, Justine Smith writes this appreciation of the infamous cult film "Beyond the Valley of the Dolls."

The bloody massacre that pulls together Beyond the Valley of the Dolls felt uncomfortably on the nose in 1970. It was released the same week that the trial for Charles Manson and his family began in the California courts, and the death knell of the 1960s can be felt throughout Russ Meyer’s paradoxical sexploitation. Based on the 1967 film Valley of the Dolls, Beyond’s reputation became painfully intertwined with the murder of Sharon Tate. The cautionary excesses of the 1967 film seemed almost prescient in light of the nightmarish events of the summer of 1969; with only a touch of cynicism, the film was re-released after Tate’s death to great box-office results.

With its shameless parodying of the worst of Hollywood excesses, Beyond the Valley of the Dolls seems touched by the city’s faux irony in the post-Manson era. As social critics proclaimed the death of an era, and nearly every Hollywood player claimed to have been invited to the Polanski-Tate home that night, the cycle of attention-seeking had begun. Unable to fully process its incestuous interconnectedness, Sharon Tate, a small star by any measure, suddenly came to represent the victimhood of the whole industry. With no sense of self-awareness, the tragedy that befell the Tate-LaBianca victims quickly rose to national significance and the Manson family became the all-purpose bogeyman summoned to confirm everyone’s festering fears about the countercultural movement.

In some ways an opportunist grab at the same self-serving anxieties of the rising anti-cult movement, Beyond the Valley of the Dolls capitalized on drug-fueled paranoia as a loose adaptation of the self-serious Valley of the Dolls. Out went the downers that pervaded the almost hazy mood of Mark Robson’s 1967 film; in came the visceral high of sex, acid, and rock music. While Robson’s was an unabashed woman’s picture, Meyer’s film built off the success of his previous oeuvre crafting a film that appealed to working-class men, as well as a burgeoning pop-art crowd. As bad as it is good, Beyond the Valley of the Dolls challenged growing unease with the Hollywood elites by indulging in an absurd escalation of vice while lampooning the self-important image the industry had of itself.

With only marginal concern for the rise to fame, most of Beyond the Valley of the Dolls portrays the moral ambiguities of a quick rise to success. From senior proms to upscale Los Angeles apartments in a couple of scenes, the band known as the Carrie Nations take the world by storm. With a raucous, almost soulful sound, their music breaks through the bullshit of the squares and comes to represent a rising culture of youth more concerned for Dionysian pleasures than moral integrity. As the film propels forward with more sex, drugs, and violence, the fragile line between reality and fiction begins to blur.

Taken at face value, the excesses of drugs and undeterred sex are presented as the real dangers in the new society. Aligning with the conservative condemnation of late 1960s vice, a line is drawn between overindulgence and murder. Those who stray too far from the Judeo-Christian ideals are punished harshly, though redemption by way of heteronormative monogamous love is still possible. This surface-level reading, however, negates evidence that the film is mocking this oversimplified moral high ground. Just because screenwriter Roger Ebert and Meyer were handing middle America what they wanted to hear doesn’t mean they didn’t do it with a tongue planted firmly in the cheek.

While Russ Meyer would not be the first filmmaker to have his cake and eat it too, the fact is he made his bread and butter off breasts and blood. The film is clearly a parody of Valley of the Dolls with Beyond representing more than just a careful guarding against copyright infringement, but a signal for multiplied absurdities. The film’s structure is built on transparent cause and effect, which raises each absurdity to a higher level, to the point of having an escalating series of episodic chapters in the epilogue of increasingly improbable happy endings.

The Hollywood narrative of “I could have been murdered by Manson” becomes wrapped up in the even more absurd position of the happily-ever-after narrative. The truth is, the line between reality and fiction has been dissolved, but not to the Shakespearean heights that some Hollywood players imagined. While truth is often stranger than fiction, as it often was with the Manson murders, the reality was also far more mundane. Looking back at the drummed-up cult fears of the upcoming decades born from the Manson murders, it was clear that there was a self-serving narrative in making a monster out of a loser. The existential melancholia that came from the facts that Charles Manson is just a man, Hollywood stars are only human, and fame will not protect you was a hard reality for some. This fear of the mundane inspired many to create their own narrative of what happened that night, whether it was their improbable survival by chance, or the dark hint of a sinister satanic underground that has been proven to be fictitious.

The negotiated reality of Beyond the Valley of the Dolls, which mediates between unfettered paranoia and titillating excess, has the effect of moral whiplash in 2016. On one hand offensive and degrading, there is sincere pleasure in the unabashed revelry of Meyer’s oeuvre. Improbably, Russ Meyer has risen over the decades as one of the aesthetic masters of his era. Working on low budgets with strung together scripts and a fetishistic obsession with women’s breasts, his films inspire indecent pleasures. Along with Faster Pussycat! Kill! Kill!, Up! And Vixen!, the late 1960s proved to be his most artistically fruitful period, featuring voice-of-God narrators foretelling gluttonous evils, while the films’ editing and framing presented women who seemed larger than life.  Unlike most of his contemporary exploitation filmmakers, Meyer leaned heavy on musical rhythm and winking irony, crafting a filmography of unusual and absurdist poetry.