Top 10 Scenes that Make Me Hungry

Title is pretty self explanatory, but for one reason or another (and, admittedly, some of these are random), the scenes listed below all give me insatiable cravings. It is interesting that many of these scenes were first witnessed when I was a child. An analyst might have fun with that. Be sure to tell me which movie scenes most make your stomach rumble in the comments! 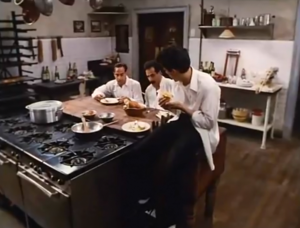 The morning after having a hellacious argument, restaurant owner Secondo (Stanley Tucci) cooks up an omelet for his chef brother, Primo (Tony Shalhoub) and the waiter who works for them (Marc Anthony). The scene is nearly dialogue free, takes place in one long take, and is perfect for a multitude of reasons. 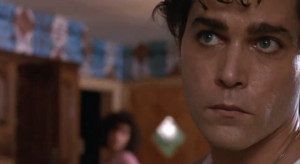 The prison sequence – in which Paul Cicero painstakingly slices garlic with a razor blade – could easily be here as well, but for me, nothing gets my mouth watering more than Henry Hill spending the entire day prepping a pasta sauce for dinner. If you’ve seen the film, you know Henry invests just as much emotional stock in that sauce as he does in his most recent drug run, and his possible police capture. Priorities, you know?

Really, what kid didn’t want Pee-wee’s breakfast machine growing up? Eggs, toast, pancakes, cereal, fresh squeezed orange juice – all prepared with Mouse Trap-like inquisitiveness. This is Tim Burton at his most ridiculous, and I absolutely love it. 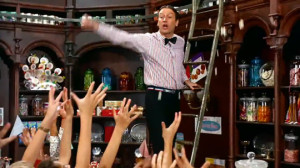 I don’t go in for sweets now, but back in the day, this candy store scene drove me nuts. You couldn’t NOT want to get your hands on everything it had to offer.

“The candy man can…”

What’s better than wishing you could have any and every food in the world, and then having it magically appear? BANGARANG! 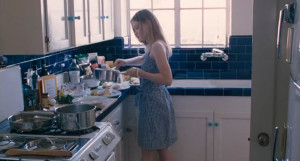 Seriously, what’s not to love about this? 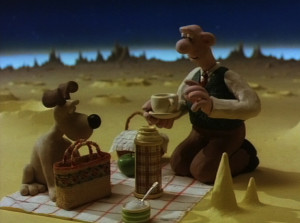 Everytime I watched this marvelous short film as a kid, I couldn’t make it through its brief running time without craving cheese and crackers. “Everybody knows the moon’s made of cheese.”

Don’t ask me to explain it, because I really cannot, but there’s something about the way Jeremy Irons eats a hard boiled egg (yes, as he’s shooting Samuel L. Jackson in the leg) that’s always made me want one. It just looks so damn good. 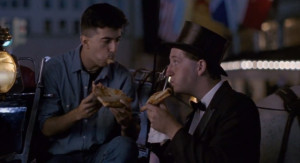 Had a noted pizza chain sponsored the opening credits of this movie, I can guarantee their stock would’ve risen dramatically. I’ve never wanted a slice(s) of cheese pizza more. 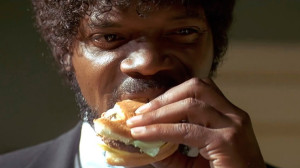 Quentin Tarantino has a thing for food. Or, more specifically, a thing for making food look so damn good on screen. Nachos grande in Death Proof, steaming rice in Kill Bill: Vol. 2, steak in Jackie Brown, strudel in Inglourious Basterds (wait from the crème…), white cake in Django Unchained, coffee in Reservoir Dogs, toaster pastries in Pulp Fiction, pancakes in Pulp Fiction, $5 shake in Pulp Fiction, and, of course, The Big Kahuna Burger in Pulp Fiction. The cornerstone of any nutritious breakfast.

I’ve been a vegetarian for seven years, and nothing has made me wonder what it would be like to cross back over more than Samuel L. Jackson’s massive Big Kahuna bite.

Mmm, that IS a tasty burger.

and the Top 5 Scenes that DO NOT Make Me Hungry

18 thoughts on “Top 10 Scenes that Make Me Hungry”