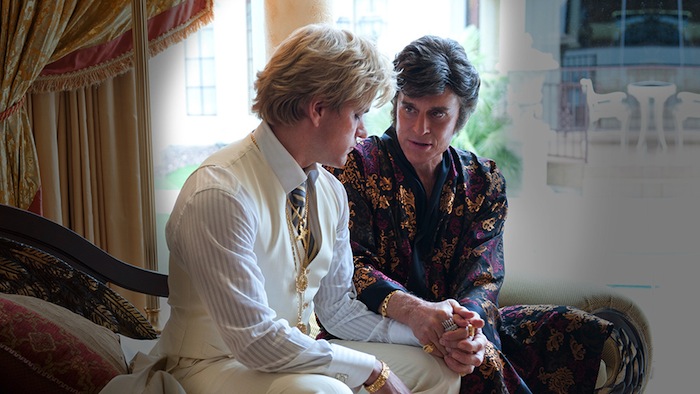 The sickly yellow color filtering of Steven Soderbergh’s digital work turns fully golden with Behind the Candelabra, every frame shaded in the opulence of its subjects’ lifestyle. It’s a fitting aesthetic touch to document Liberace, a performer seen in the film decked out in rhinestones even at home. The sparkle of Liberace’s decidedly tacky, aristocratic world—”palatial kitsch” as the artist (Michael Douglas) himself refers to it—lends itself surprisingly well to Soderbergh’s sleek technological modernity, with the digital image perfectly capturing the blinding glint of light off each immaculately patterned piano and suit.

Liberace, who uses his mononymous stage name even in private, does not separate his ostentatious public persona from his private life. Upon meeting and rapidly falling for young veterinarian-in-training Scott Thorson (Matt Damon), Liberace laments to the young man that he never knows whether anyone likes him for him. It becomes clear, however, it is precisely Liberace’s overly giving nature that makes him Liberace. He is lavish and generous with his possessions, and Scott, like any other lover, becomes an unofficial item in Liberace’s ledger. Allocating money to the latest boy toy constitutes not an allowance but redecoration, of which Liberace is so fond.

The subsequent arc of Liberace and Scott’s relationship fits snugly within biopic formulas, but Soderbergh’s analytical eye cares less for the usual narrative beats than the process of a relationship strengthening and falling apart, starting with two people with different personalities learning to live with each other. Douglas, one of the least self-conscious leading men in Hollywood, plays Liberace with an openness befitting a man whose wealth and fame affords him the freedom to all but openly broadcast his homosexuality without fear of repercussion. Damon’s Scott, more used to the normal realities of gay life in the late ‘70s, flinches away from kisses and physical contact when another person walks into the same room, but Liberace continues unfazed. “People will see what they want to see,” he whispers into Scott’s ear while caressing his head, eventually coaxing the young man to have as much confidence in his fit form as Liberace does in his saggier body.

Where the pair’s romance begins to divert from the usual path is in their gradual development of physical, not emotional, equilibrium. Scott’s increased confidence makes him more like Liberace, who elects to get a facelift to make him look younger for his new beau. Liberace also asks his surgeon (a frightfully prostheticized Rob Lowe, face locked in unnaturally sharp angles) to make over Scott to look like a young version of himself, something to which the young man agrees with alarming speed. The addictions that arise from the surgeon’s carelessly huge prescriptions set the stage for the couple’s drawn-out dissolution. However, Soderbergh subtly suggests that the forced physical unity of their surgeries and the blending of brash temperaments leaves emotional bonds as the default weak link.

Soderbergh naturally matches the trajectory of this union and collapse through his direction. Early shots of Scott before meeting Liberace use straightforward, static placements that give way to the director’s idiosyncratic, angular setups of Liberace’s cavernous home and, eventually, backroom meetings to hash out something akin to a divorce settlement (“palimony” as the real Scott Thorson called it).

His woozy focal shifts come into play when Scott falls into addiction and paranoia, but perhaps the most quintessentially Soderbergian shots take place during Liberace’s show, in which Soderbergh matches the pianist’s capacity for flair and showmanship while restricted in his movements by bouncing around the artist to find various angles from which to view the display. A quarter-second insert close-up uses a wide-angle lens to further stretch Liberace’s arms when he does a call-and-response, while a shot pointing straight up from the floor under the piano finds an ostentatious yet personal view of the performer, perfect for Liberace’s style. 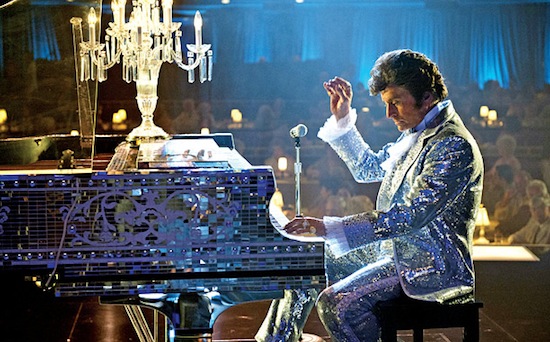 Soderbergh films the escalating descent of the back-half with the same clinical detachment with which he viewed a global pandemic, a betrayed private agent and the like. The director hones in on the ways in which relationships change, and in this film the relationships in question are romantic. Even as emotions grow heated, Soderbergh hangs back to simply observe how gestures that once connoted affection now communicate unease, lovelessness, even revulsion. Douglas and Damon cannot avoid going camp with their roles, but as outlandish and hyperreal as their situation is, the actors nevertheless play out a natural relationship’s highs and lows.

Soon after the two become a couple, Liberace recounts a religious experience in which his outrageous costumes inadvertently poisoned him to near-death, a potential judgment for his homosexuality that then lifted the burden of his Catholic guilt when he saw a vision of a nun before miraculously recovering. From the experience Liberace gathered that God had no problem with his lifestyle and wanted the man to live. Similarly, Behind the Candelabra portrays the ostentation of Liberace’s personal space as nothing more than a means of self-expression; the events of his romance with Scott may be unusual, but the tenor of it is, as Soderbergh’s airless camera suggests, almost unremarkable in its normalcy.

One thought on “‘Behind the Candelabra’”