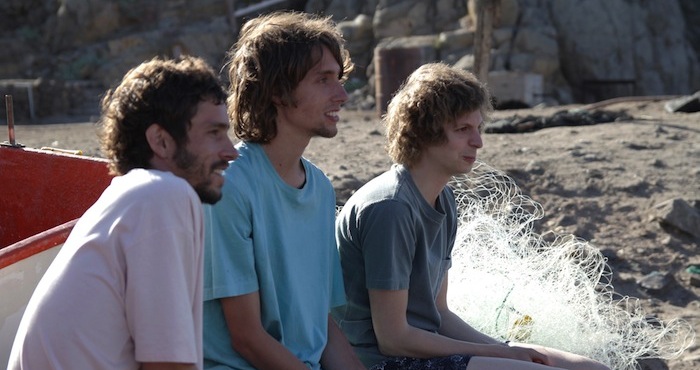 Chilean director Sebastián Silva and co. have made something very much in the spirit of the psychedelic road movies of the 70’s. They shot this film in two weeks on a lark, just because they had nothing to do while waiting to move forward with production on a completely different film (Magic Magic). They had a loose script, but every scene was improvised. The fact that Crystal Fairy feels as fully realized as it does, when it was such a ramshackle construction, is kind of miraculous.

Cera plays Jamie, an American vacationing in Chile for one purpose and one purpose only: to experience the purest drug trip that he can imagine. Along with his friend Champa and his two siblings (Juan, José, and Augustín Silva, all brothers of the director), he will travel to the mountainous north of the country, find a San Pedro cactus, and then use it to brew and imbibe the best mescaline in the world. Their plan hits a snag when Jamie accidentally invites along Crystal Fairy (Gaby Hoffman), who appears to be a pure distillation of every possible stereotype about New Age hippies. Still, Jamie won’t let anything get in the way of his goal, even as interpersonal tensions rise the closer the group gets to it.

Crystal Fairy seems like a meta-comment on the manic pixie dream girl archetype, starting with her ridiculous name and filtering down through every outsized aspect of her personality. She insists on plunking blessed stones into everyone’s drinks, tries to pay for goods and services with drawings, and has no personal nudity taboo (and does not appear to shave anything). In a more conventional movie, her quirks would slowly charm the not-living-life-to-the-fullest Jamie, and the audience would be expected to fall in love with her.

But this isn’t a conventional movie. It acknowledges that Crystal isn’t just “offbeat” – she’s annoying and crazy, and Jamie can’t stand her. He’s irritated or repulsed by her “quirks,” in fact. In other words, he reacts to her as a normal human would, not as an indie rom-com protagonist would. But the story also shows what would have to happen to produce a person as off-kilter as Crystal. A climactic conversation reveals her to be deeply, horribly damaged. Even before that, though, she’s a sympathetic character, both because the movie acknowledges her bizarreness and because Hoffman layers her oddity with a real, endearing awkwardness. Her level of commitment to the role is admirable.

Hoffman may be MVP, but Cera is also doing something remarkable with how much he plays against his usual type. Jamie is not another rehash of George Michael. He’s a prick, possibly a drug addict, and so focused on his aim of the San Pedro cactus that he’s constantly spoiling everyone else’s fun. The friction between Jamie’s stubborn single-mindedness and Crystal’s loosey-goosey free-spiritedness makes for a conflict that alternates between funny, uncomfortable, and sometimes a combination of both.

Interestingly, the way this conflict culminates results in Crystal fulfilling the typical function of a MPDG. Through knowing her, Jamie becomes a better person. But the change is only ever so slight. Really, it’s just the first step on a possible path towards the redemption of his relentless asshattery. But their journey ends in a moment of true empathy, brought about not through quirkiness but through very human interaction. And the way it plays out is equally sad and lovely.

I liked Crystal Fairy more than I suspect most people will. And I know why they won’t like it. It’s very lackadaisical in its structure, not ever feeling a particular hurry to get anywhere. Viewers might not appreciate the characters as critiques of types, or won’t be able to forgive it. But Silva is chasing (or lazily following) great ideas about the fronts that people put up. It’s a messy film, but it hits more than it misses, sometimes landing on something emotionally resonant.

One thought on “‘Crystal Fairy’: A Hit and Miss Success from Chilean Filmmaker Sebastián Silva”