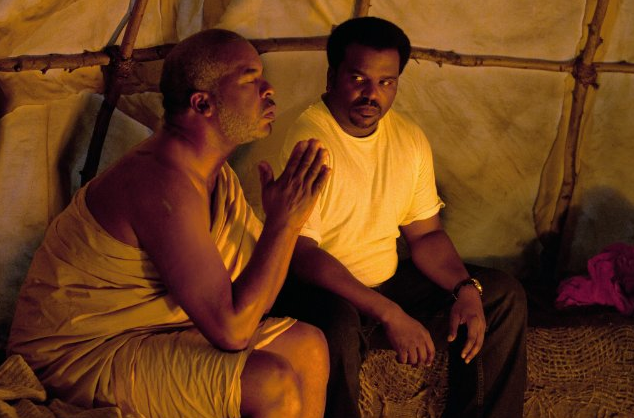 I saw Peeples in the least ideal situation imaginable. The movie started nearly 45 minutes late due to projector issues, and I was alone in the theater with one other person, never the right scenario for a comedy. My mood, thankfully, changed during the course of the film, as I was won over by Tina Gordon Chism’s thoroughly entertaining family comedy. It boasts a great cast, plenty of sharp dialogue, and perhaps most importantly, a sincerity and warmth absent from the majority of studio comedies nowadays.

It covers familiar territory but does so with a confidence in execution — it earns its big laughs and builds to a winning ending. Admittedly, there are set-pieces that fall flat, but the ones that work more than make up for the ones that don’t. I wasn’t leaving this theater with the film’s flaws in my mind; I left with a smile, thinking back over the plenty of good the film provided. As of this review’s publishing, Peeples sits at a 36% on Rotten Tomatoes. Perhaps the name Tyler Perry brought some critics into the theater with their minds made up, when in fact, this is by a healthy margin the best film to date with Mr. Perry’s name attached. Those entering with an open mind might be surprised to find what I found: Peeples is the best comedy to date in 2013.

Wade (Craig Robinson from TV’s The Office) works in New York City, singing songs to children as a type of therapy. He’s planning on proposing to his girlfriend of a year, Grace Peeples (Kerry Washington). She’s headed to her very luxurious home in Sag Harbor for Moby Dick Day, a special annual event attended by her whole family and run by her father (David Alan Grier). She’s not ready to introduce Wade to her father, but Wade suspects that Grace is putting her dad on a pedestal. Once she leaves town, he visits his brother (Malcolm Barrett), a “doll doctor,” who specializes in repairing broken toys.

I’m not sure if Wade or his brother’s jobs are real things or not, but the “wackiness” of their occupations is but a minor speedbump at the film’s beginning. Wade’s brother convinces him to go to Sag Harbor, show her dad that he’s a respectable man, and ask him for his approval to propose to Grace. Wade agrees, but as one would expect in these types of comedies, he’s a fish out of water, and his brand of shaggy dog honesty lands him in one mess after another in this affluent community, where skeletons lace every closet. As Wade is horrified to learn more and more about his girlfriend, and her father grills him at every turn, how can he possibly get her family’s approval by weekend’s end?

Craig Robinson as the lead is crucial to the film’s success. He balances keeping his character grounded in emotion while having to do some extremely broad comedic work. Most comedies can’t find actors who can so capably fill both parts, so they divide up the roles into “grounded protagonist” and “clown best friend.” I can’t recall the last African-American comedy that dared to have its main character go this broad comedically while simultaneously asking him to be the heartbeat of the film– if this is an all-black Meet the Parents meets Wedding Crashers, then Craig Robinson is the ideal Ben Stiller surrogate.

The rest of the cast is equally successful: David Alan Grier oozes pompousness from every pore, S. Epatha Merkerson is a natural in her first broad comedy role that I’m familiar with, Kerry Washington does an admirable job with a very tricky role, and Malcolm Barrett as the brother walks away with every scene he’s in. We’re even treated to a Melvin Van Peebles sighting as Grace’s grandfather, who shows us a lot about how Grace’s father got the way he is. Every cast member is given their share of the spotlight by Chism, and the majority of the time, they stick the landing.

You don’t have to believe me. I get it. The commercials are underwhelming, the title is odd, and the name Tyler Perry is attached. Yet the more I think about it, the more I remember that many of my favorite comedies have underwhelming commercial– comedies are about build, and TV ads are forced to present punchlines without any of the set-up. Plus, it’s not like this group of actors lacks pedigree. Robinson has been a featured player on a hilarious hit sitcom for nearly a decade, Washington is a TV star and recent Tarantino supporting actres, Merkerson is a Golden Globe and Emmy winner, Grier is a three-time Tony nominee, Tyler James Williams was a sitcom lead for four seasons on Everybody Hates Chris, and Van Peebles is a living legend of black cinema. You know what? Forget the cast: Tina Gordon Chism wrote Drumline and ATL, both smart, heartfelt, and enjoyable films. I’m not saying that every joke works here, nor am I claiming this comedy breaks the mold. I’m saying it’s odd to me that a film boasting a terrific all-black cast and a female African-American auteur doesn’t receive its proper pre-release critical hype just because Tyler Perry’s name is attached as producer. Peeples is ideal for families looking for a summer outing– it’s got plenty of laughs, it doesn’t often resort to gross-out humor, and it reaches a charming, crowd-pleasing conclusion. Let others fail to take up for this worthy comedy: I’d be honored to be the Peeples‘ champion.