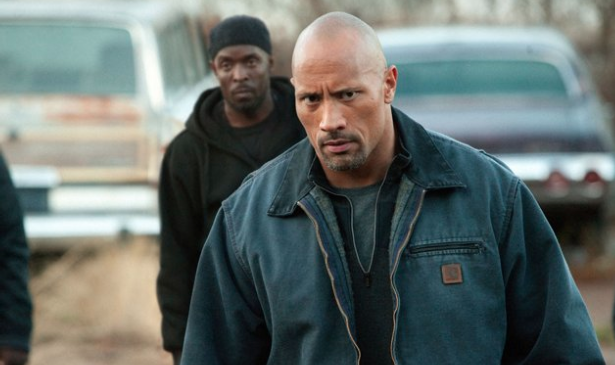 Diverging from the Path of Least Resistance in Snitch

Underneath Snitch’s B-movie action filmmaking artifice is a simplistic and universal story about the eternal bond between father and son, and the extraordinary lengths many parents will often go to in order to protect their children from the dangerous world we inhabit.

In the case of Snitch we have John Matthews (Dwayne “The Rock” Johnson), a well-off businessman who runs a trucking company, shocked when he receives a call informing him that his son, Jason (Rafi Gavron), has been arrested on drug trafficking charges. Neither a proponent of selling narcotics nor a kid prone to illegal activity, Jason is an ordinary teenager preparing for college – until he is set up for a crime he did not commit.

Unwilling to snitch or set-up his friends for the DEA, Jason keeps his dignity while be sentenced to a minimum of 10 years in prison. Reality sets in after about a week though. John visits his son only to see his face bruised, his psyche scared, and his life shattered.

In a desperate attempt to absolve himself for being a lackluster parent, John promises Jason that he’ll do “whatever it takes” to get him out of prison. Hell-bent on keeping his word, John makes a deal with the DEA to work undercover and expose the power players in the local and international drug cartels.

Where most movies would begin to succumb to the trappings of stylized action and bloated shootouts, Snitch decides to veer away from the path of least resistance. Despite the fact that by doing this undercover work he’s knowingly putting himself, his wife and his other child in peril (not to mention his company and the co-worker aiding him), John remains focused on freeing his imprisoned son.

That building of tension through John’s increasing moral quandaries speaks to the movie’s slow-burn approach as a whole. In his third feature film, Ric Roman Waugh (an ex-stunt man) strives for sincerity and compassion in a genre mired in insincerity and callousness. As a father of two, Waugh appears to be very cognizant of this culture, and makes a conscience choice to frame his picture around that palpable kinship between a father and his son.

Sure, Snitch grows an aversion to reality, pragmatism, and coherency in its final 20-minutes (an elongated action-sequence that in fear of spoiling the movie I won’t elaborate on). But amid the lunacy, bizarre plot developments, car chases, drug deals, and politics (the film makes slight jabs at the inadequacies of our current drug laws), Waugh’s film does more than just satisfy our action filmmaking cravings.

Like life, the film is messy, disjointed, and a bit frustrating at times. But minor as it may be, Snitch effectively illustrates the great heights we occasionally rise to for the ones we love.

Every now and again it’s good to be reminded that we’re still capable of doing good even in the face of evil.